In the field the opportunity is in what is thrown

In the field they know it: a loaf of bread that gets hard is not thrown away. From it can be born a beer with a distinctive recipe. Livestock slurry does not have to be waste that is difficult to dispose of: it is possible to transform it and generate energy for the livestock farm itself. With the fruits that are not harvested, or that have some aesthetic defect, jams with full flavor and food quality can be made. They are examples of the reuse of waste in rural Spain, where using what was thrown away until recently, the basis of the circular economy, is an incipient formula for creating businesses or expanding existing ones, and making them more sustainable.

The list of waste from the field that can be transformed into something useful is long: olive pits, manure, used oil, leaves and branches from pruning, discarded livestock production… With these everyday materials, you can make, among others, products cosmetics, clothing, food and even renewable fuels. And a new wave of activity in the countryside may emerge from them, in the words of Pedro Martín, from Zabala Innovation, a consulting firm that develops multiple circular economy projects in rural areas: “All those natural resources are being wasted, and yet They represent a very significant source of income.

The bioeconomy generates 2.2 billion euros and employs 17.5 million people, according to the European Commission

This use of organic resources, dubbed the bioeconomy, already generates 2.2 billion euros and employs 17.5 million people, according to the European Commission, which expects this figure to increase in the coming years. And it opens a path with a lot of potential to fix population: “It can stop and even reverse the trend of depopulation. The appearance of new bio-based value chains, together with new communication technologies, create opportunities in activities linked to food, feed, fibers and bioenergy”, explains Martín.

An example of these economic engines to be explored are the industrial centers themselves, complexes where it is possible to substitute current raw materials for some types of waste to transform them into advanced biofuels. Susana Benedicto, Coordinator of Transformation at the Repsol Industrial Complex in A Coruña, where the energy company has already produced hydrobiodiesel from used frying oil, explains the importance of the proximity of the transformation plants to the origin of this waste. “In this way, a value chain is established with local suppliers, logistics costs are reduced and wealth is created in the area, integrating the rural and industrial world and promoting public-private collaboration.”

Here are three examples of the reuse of what was never rubbish in rural Spain.

Israel and Héctor, the García Sánchez brothers, carry bread in their blood. For decades, their parents, grandparents and great-grandparents have made it and sold it to the inhabitants of El Barraco, a municipality of Avila with almost 2,000 inhabitants. They, the most recent generation, continue this deep relationship with the product, but have put their own unexpected spin on it. In 2017 they founded Raíz Cuadrada, the first craft beer producer that uses leftover stale bread, from their family’s bakeries, in the recipe.

Israel García Sánchez, a 41-year-old computer engineer, affirms that in 2008 they “crossed the wire”. After several years working outside of Spain in large companies, he returned to El Barraco and introduced his brother Héctor, a 38-year-old telecommunications engineer, to the world of beer. Little by little they immersed themselves in an art as extensive as it is fascinating. His intention was to connect this drink with the world of bread. “We learned how beer is made, but also what fermentation similarities it has with bread. We investigate how to unite both products. It’s just that when I was little I remember myself stuck in the basket with the bars”, he laughs. 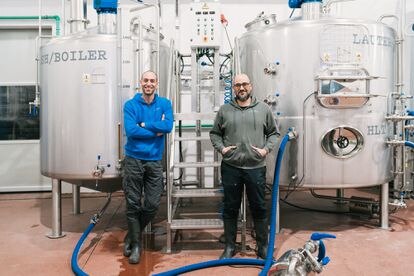 His beer is the first to contain bread. “Essentially, it helps foam retention and gives the liquid silkiness,” details the craftsman, who explains that every day they go to the family bakeries to collect the dry bars. They have not stopped there. They also release bagasse, the spent grain that remains after infusing the product, a source of protein and fiber that they give to local farmers to feed their cattle. “Taking advantage of what surrounds us sets us apart”, sums up Israel.

They sell online to the entire country, but their factory, with a production capacity of 100,000 liters per year, is located in El Barraco, the first town in the Alberche Valley, where the area’s cheeses and wines, farms poultry and fur clothing. The municipality has experienced a gradual population decline in recent years. For this reason, the brothers consider it the ideal place: they grew up here watching their family knead bread, a product that they now use, in the same way that they use the Alberche water, which due to its qualities allows them to work many styles of beer. “We thought: either we do it here or we don’t. That is why we set up the factory on our land, to try to fight against depopulation”, closes García.

The Arcoiris Group is the largest agricultural and livestock cooperative in Matarraña (Teruel), a region of abundant nature that groups 18 municipalities -the head is Valderrobres- and 8,000 inhabitants. They employ some 600 people from the area directly and from their origins they practiced circularity, understood as an integral and total elaboration of their products. María Lorente, attached to management, explains it: “All production takes place in our facilities. We manufacture semen for pig and rabbit artificial insemination. We have farmers-partners who deal with the feed. We take care of the slaughter, butchering and drying of the sausages. And we have our own transportation.

Something was still missing from this whole: finding a logical outlet for the slurry – the waste derived from raising animals on farms -, the most common waste from this type of farm. “Manure is a natural fertilizer, but we are in an area without large extensions, and there are not so many needs to pay. We found ourselves with a large surplus”, says the directive. They found the solution nearby, without leaving Matarraña, a region where they live from agriculture and an incipient tourism boom. The Government of Aragon had built some waste treatment plants that were not yet in operation. They presented themselves to the public tender and were awarded their management. 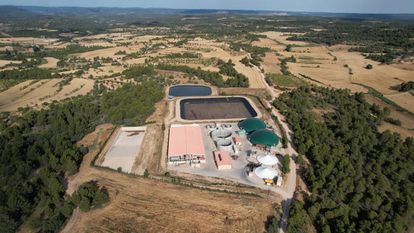 Aerial view of one of the slurry processing plants, among other waste, that Grupo Arcoiris will soon use in the Matarraña region (Teruel). / ASSIGNED

“We realized that with an upgrade of the equipment we could convert manure, and other organic waste -parts of the animal that are not used, such as guts- into electricity and biogas”, Lorente details. The idea is that half of what is generated is self-consumed in the plants themselves so that they are self-sufficient. The other half will feed the group’s own facilities. “At a later time we will be able to reach agreements with third parties for the sale of biogas. Or they will serve as fuel for our own vehicles if we retrofit them”, he ends.

Before practicing the circular economy, you have to learn its basics. In the visitors’ house of La Alberca (Salamanca), intended to guide and inform foreigners who come to this beautiful region, there is a small school where this philosophy is taught in a practical and agile way. In this laboratory, baptized as Batuecas and dependent on the Natural Heritage Foundation of the Junta de Castilla y León, inhabitants of the area come to train and find a possible job opportunity. Active since 2019, Jesús Díez, director of the foundation, defends the idea that small is beautiful: “The installation is modest and did not cost us too much. The idea was to influence a forgotten aspect of the circular economy: the shared economy, the sharing of knowledge and equipment”.

Entering this laboratory tries to clarify the sometimes elusive concept of circular economy. “We did several surveys and there was a lot of confusion. In general it was associated with waste management, recycling. But the concept encompasses many more things: repair, reuse, recovery”, says Díez. Afterwards, the participants, 83 neighbors with a majority of women, choose a field of action in which to experiment and learn. The objective is to offer them training based on the use of waste that, over time, can be a small economic supplement. One of the activities of the Batuecas circular economy laboratory, located in La Alberca (Salamanca). / ASSIGNED

The first learning area is a workshop that fights against food waste. “Traditionally, in rural areas, the orchards were worked and what was left over was shared with the family. Now half of the production is not given an outlet”, Díez contextualizes. They talked to different farmers so that they would give them their surpluses. From the chestnuts they have extracted flour with which to make pastries or batters, or brown glacé. With the fruits they make jams or compotes. The mushrooms are dehydrated and packaged. “As in all laboratories there is a very important training component. You have to learn a series of sanitary and regulatory procedures. Mixing the theoretical and the practical, yes”, she expands.

To this is added a workshop dedicated to recovering native textile fibers whose use is being lost: “They perfectly replace plastic fibers, which are in everything we wear,” adds Díez. One of them is wool, a material that is lost in large quantities due to the lack of a market, in addition to the sterile cost that shearing implies for the farmer. In the workshop they have installed all the necessary machinery to work it. There is a carding machine, a spinning wheel… The project has led to an association that promotes the use of these native materials and their sale at fairs. Some owners of hotel establishments already offer a textile detail, manufactured by themselves, to their clients. Due to these and other initiatives, the Batuecas laboratory has been included in the manual of good practices in circular economy of the Ministry for the Ecological Transition and the Demographic Challenge.

Biofuels, another example of circular economy from field waste

An olive stone, a frequent organic waste in rural Spain, is used to make products as diverse as cosmetics or pellets. But today its use goes much further: this waste (and others such as cellulose or manure) can be transformed into biofuel, a new generation of sustainable fuels whose carbon footprint is up to 90% lower than traditional ones, according to estimates by the experts. Compatible with current car, boat and aircraft engines, these fuels are already present in car tanks – for example, diesel already contains up to 10% fuel from renewable sources. This product does not depend on finite materials, something that experts say can help reduce energy dependence on fossil materials and decarbonise the economy. Susana Benedicto, coordinator of Transformation at the Repsol Industrial Complex in A Coruña, a facility that already produces hydrobiodiesel from frying oil, affirms that in the medium term, waste that is more difficult to process will also be used, such as waste urban, agricultural and livestock solids or even CO2: “In these cases, investments in new facilities are necessary to convert this waste into something that can be incorporated into the refinery. We are working on that”.

E-prescription from a pharmacist's point of view: "So far no improvement visible"