Immigrants account for 8.4% of the Andalusian population and already commit 21.7% of crimes

Andalusia has closed the first semester of the year with 25% more criminal offenses. In this sense, the double-digit growth of crimes such as sexual assaults with penetration (+15.5%), with a total of 164 in just 180 days that we have from year to Almost one rape a day. In addition, the total number of sexual assaults already reaches the 1.606 between January and June of this year, 20.9% more than a year ago. They have also promoted robberies with violence (+40%), los thefts (+45%), los murders (+27.6%) and the robberies with force in private properties (+21.6%). With a total of 46,344 criminals in the first half of the year, 36,303 were of Spanish nationality and 10,041 foreignwhich means that immigrants (representing 8.4% of the Andalusian population) they commit 21.7% of the crimes in Andalusia. 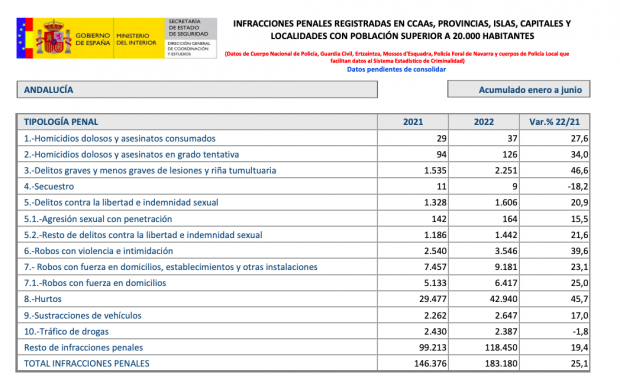 Andalusia It has closed the first half of this year with a total of 183,180 registered criminal offenses, compared to 146,376 in the same period of 2021, according to the latest crime report from the Ministry of the Interior. Thus, the region has experienced this last quarter a Turn up by 25.1% in the number of criminal offenses compared to the same period last year.

Of the total of 183,180 cases recorded in the last semester, 121,790 were serious or less serious and 61,390 minor crimes, such as injuries, threats and fraud. This same balance, according to the Central Government Delegation in Andalusia, reflects that “the average crime rate in Andalusia stood at 41.5 crimes per 1,000 inhabitants in the second quarter, which is 4.7 points below the national rate, which was set at the end of June at 46.2».

The labors of the Security Forces and Bodies have made it possible to clarify the 41.2% of criminal offenses and one arrest rate of 253 per 1,000 criminal offenseswith a total of 46,344 people involved, 36,303 of Spanish nationality and 10,041 foreigners, which means that foreigners commit 21.7% of crimes in Andalusia.

Andalusia, remember, continues to be the community with the largest population in Spainspecifically, 8,465,236 people registered in the Continuous Register as of January 1, 2021. number of foreigners registered exceeds the 700.000, for what they represent 8.4% of the total community. However, they commit 21.7% of crimes.

As for thefts in agricultural or livestock farms, during the first six months of the year they have experienced a rise of 12.2%, going from 1,498 in the second quarter of 2021 to 1,681 in the same period of this year.

Walking barefoot: these are the reasons for children to do it