Identified the body of Juan Arjón López, the fourteenth journalist killed with violence 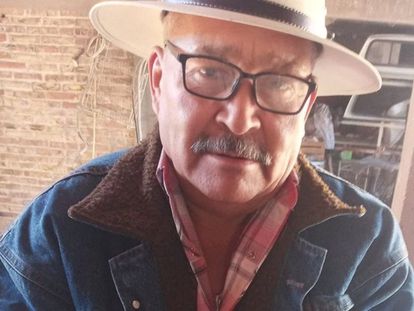 Juan Arjón López, a 62-year-old journalist, whose death was confirmed by the Sonora Prosecutor’s Office on Tuesday, August 16, 2022.RR. H.H.

The body of independent journalist Juan Arjón López has been identified by tattoos. This has been confirmed by the Sonora Prosecutor’s Office at a press conference. The 62-year-old man was last seen on August 9 in the city of San Luis Río Colorado, but no complaint had been filed for his disappearance. He ran a news portal under the eloquent name of What are you afraid of. He is the fourteenth journalist to lose his life in Mexico this year.

This past Sunday, brigades of citizens, some of them colleagues from the press, as well as police officers and the group of Searching Mothers of Sonora began tracking tasks to locate the journalist. In addition to his portal, the man provided services at a food court. The companions saw his car parked a few days ago, but nothing was known about his whereabouts. The police urged to file a complaint, something that had not been done to date, according to the prosecution.

The searchers entered this Sunday through desert landscapes in search of the reporter. Despite the fact that there was no complaint, the alarms on social networks prompted the prosecution to launch the police forces to search for him informally. Today there is news of a corpse whose marks identify it.

This year is exceeding the worst figures that were known. In 2017, 12 journalists died violently in Mexico, a country that for these purposes has figures of places in armed conflict. The alarm generated by these crimes has prompted international political and human rights organizations to condemn this violence and ask the government to take action on the matter. This was the case of the European Parliament or the Inter-American Court of Human Rights.

Unlike countries at war, which can find themselves under the fire of battle, journalistic work in Mexico is uncomfortable with corruption and organized crime. Traditionally, these deaths are blamed on drug traffickers, who do not want to see their affairs in the media, which is why there are territories such as Tamaulipas where information on crime is practically nil. But the specialists who are dedicated to documenting these crimes, such as the organization Article 19, have pointed out on numerous occasions that most of them start from public officials, whether they are police chiefs or politicians. They protect their corruption or their collusion with drug trafficking in all its dimensions with hired assassins. To all this we must add the impunity in which these murders remain, 99% without conviction, also according to the data of Article 19.

The last reporter on the sad list was Ernesto Méndez, shot to death in San Luis de la Paz (Guanajuato) on August 2. He was the director of Tu voz and was partying with friends in a bar when an armed group opened fire on him. Like many other journalists in Mexico, he lived under threat of death.

The Government has defended its constant work to unravel these cases, but the truth is that most of the time there are detainees, the hit men are hardly caught, almost never the instigators of the crime, so the danger continues to lurk others. The instigators, politicians, businessmen, people in power, rarely go to justice, so the organizations that work in this matter believe that corruption and crime are winning the battle: there are more and more zones of informational silence.

This year is not being unprecedented just because of the number of corpses. The protests have also been felt strongly since the beginning of January and several crimes took place, some of them very notorious, for being reporters with extensive professional experience. And because one of the murders, that of Lourdes Maldonado, in Tijuana, was a major emotional blow. She was able to see the woman and hear the entire country, some time ago, in one of the president’s morning conferences asking for help because she felt threatened. “I fear for my life,” she said publicly. And time took it upon himself, sadly, to agree with her.