How should the new selectivity be? Five possible changes in exams and the obstacles that stop them

The Selectivity is a key piece of the educational reform under way and one of the last ones that remain to be approved. If the university entrance exams change, the entire Baccalaureate will change. If it remains the same, everything will continue more or less as before, whatever the new curriculum says (which is the norm that regulates the contents of the educational stage) with respect to implementing a more competent teaching that provides students with a deeper learning , aimed not so much at reproducing isolated content in an exam, but at being able to mobilize knowledge, relate it and apply it, for example, to solving problems. Professor of Educational Psychology Carles Monereo sums up this retroactive power of evaluation with a phrase: “Tell me how you evaluate and I will tell you how your students learn”. “And the same goes for teachers,” he adds, “when you change assessment, you change both the way you teach and how you learn.”

It is expected that the new Selectivity will begin to be applied in June 2024 and will be released by students who will start first year of Baccalaureate in September. The intention of the Ministry of Education is that the characteristics of the new test are known before the start of the next course, so that students and teachers know from the beginning of the stage what test they will face at the end of it. The University Access Assessment (Evau) will change, but surely not enough to promote a profound transformation of the Baccalaureate, the sources consulted for this article agree, some of which ask not to be cited. First, because converting Selectivity into a truly competitive test would be complex. And second because the inertia and interests of the actors involved, teachers, autonomous communities and especially the Universities, naturally tend to stop it. 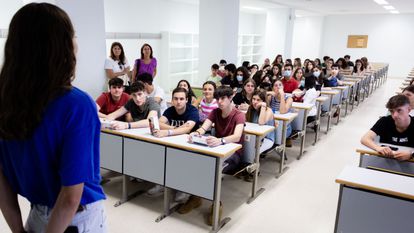 Three decades ago, when the Organic Law for the General Organization of the Educational System (the Logse, the norm that transformed the educational structure) was approved, recalls one of the sources consulted, the University of León exasperated those responsible for the Ministry of Education by communicating to the institutes that forgot about the official documents and continued basing the contents that they taught in the Baccalaureate on the usual Selectivity. Another factor that pushes in the direction of not changing things much, says Francisco Luna, who was director of the Basque Institute for Evaluation and Research and is a member of the State School Board, is that in education, as in other areas of life, when something does not work well (such as the current Selectivity) but has existed for a long time, it tends to be tolerated. The dysfunctions of an innovation tend, instead, to generate great fires. And the Selectividad, in which more than 200,000 adolescents are examined each year, part of them risking access to the chosen career by small margins, seems especially favorable for them.

The difficulty of transplanting PISA

How should a new selectivity be coherent with the new competence curriculum of the Baccalaureate? The best competency exams that exist are those of PISA, the international test that the OECD holds regularly in more than 70 countries. “But they have three years to do the test and one year to correct it,” says Luna, who has participated in the organization of several editions of the test in the Basque Country. Half of the PISA questions are closed, the other half are open, and in the latter, explains Luna, “there are real battles in international meetings to agree on the correct interpretation that will be given to said open item.” In her opinion, all of this makes it very difficult to apply a format very similar to that of PISA to the Evau, in which the exams are held in June or July and the process must be resolved to start the degree after the summer.

Reduce the number of exams

The current Selectivity has a minimum of four or five exams (depending on whether or not the territory has a co-official language), of which only one depends on the Baccalaureate modality chosen by the student and the rest are for subjects common to all branches of the stage. And students can take a maximum of eight or nine exams (in the case of those who aspire to the highest grade that can be obtained in the Evau, which is 14). The report Notebook on learning competence in Spain, prepared by a dozen experts and published a few months ago by the entity Haz, Alianza por la Educación, proposed reducing the total number of exams as a way to achieve more “significant” learning by of the student body In other European countries, some of which have recently reformed their university entrance exams, the number of exams is lower. In Italy, for example, students take language exams and a specialty subject, in addition to conducting an interview about the course content. In Portugal, Portuguese language and three specialty subjects are examined.

“The ideal would be fewer exams that serve to evaluate various competencies [existen ocho competencias básicas] each one”, comments the secondary school counselor Javier Cortés, “but the structure by subjects of the current Selectivity would have to be broken, which would be a very brave step”.

A more feasible and, according to the experts consulted, a more likely change would be for the foreign language exam to be, at least in part, oral. Such a test would transform the way of learning the language, which is normally English, in high school and perhaps in secondary school as a whole. And it would be competency-based, by requiring the student to mobilize their knowledge of the language, instead of, as in other subjects, limiting themselves largely to reproducing memorized content, which is largely forgotten after a short time. Toni Gil, coordinator of the Evau in the Valencian Community, recalls that this change was already contained in the Selectivity reform approved last decade, and that it was not applied due to the logistical obstacles posed by the universities and the autonomous communities to put it into practice. For example, to record the tests so that they could be used by the students. Gil admits, however, that the Official Language Schools have been carrying out oral exams for years in the tests to obtain official titles without major problems. 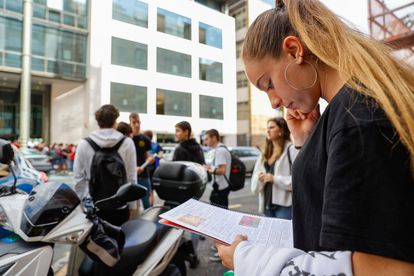 A student reviews notes in Bilbao, this Thursday before taking the Selectivity exam. LUIS TEJIDO (EFE)

Reinforce the competence part that the test already has

Another realistic step to reform the Evau would consist, the sources point out, in reinforcing the competence content of the current test. Using as an example those parts that to a large extent already are, such as those of the History of Philosophy exams that ask students to synthesize the ideas of a philosophical text and summarize its argumentative structure.

Juan Manuel Moreno, professor of Didactics and School Organization at the UNED, wonders if it would not be better to remove the Evau directly and look for a system for assigning university places. The current model, he says, has low levels of “the three key characteristics of any university entrance exam: uniformity, objectivity and optionality.” The lack of the first two can be seen in the differences in the results between autonomous communities and even between courts, “which are very large and far from being justified.” The low optionality derives from the great weight that common subjects have in Selectivity and the little that specialization subjects have. Moreno does not foresee, in any case, “substantive changes, because the actors involved have few incentives to do so.”

The only ones who could have serious reasons for it, he points out, are the students, but in practice, accessing the University is easy, even if it is not in the chosen career, and even this problem is relativized for a part of the students by the expansion of private universities. “The demographic evolution”, concludes Moreno, “is also taking us to a scenario in which the universities will be the ones that compete for the students and not the students to enter the universities”.

A diary with photographs to tell the story of Emmanuel and Ezinna, two asylum seekers