Hotspots in space: why the Lagrange points are so interesting

Right now, the main focus is on the Lagrange point L2 in the sun-earth system. L2, 1.5 million kilometers outside the earth’s orbit around the sun, is particularly suitable for astronomical observations – and this is currently being shown impressively by the James Webb Space Telescope, successor to the Hubble Space Telescope. After its launch on December 25, 2021, it has been orbiting L2 since January 24, 2022 in an orbit at a distance of 250,000 to 832,000 kilometers from the Lagrange point. From there, it now delivers fascinating images of galaxies with a hitherto unimagined sharpness of detail. Because the radiation from the sun, earth and moon always comes from one direction, from “inside”. The space telescopes Gaia (ESA) and Spektr-RG from Germany and Russia with the X-ray telescope eROSITA developed by the Max Planck Institute are currently orbiting L2. 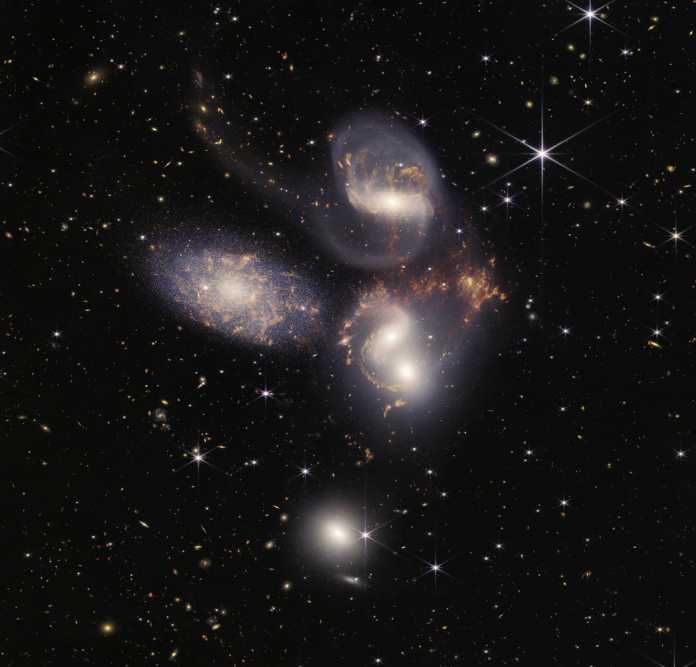 Point L1 in the Sun-Earth system is 1.5 million kilometers inside the Earth’s orbit. From there, satellites can observe the sun undisturbed, as the European solar observatory SOHO has been doing since 1996. The day side of the earth is also always in view, which is used by missions such as the American Deep Space Climate Observatory. In the midst of the solar wind, which comes from the Sun and meets the Earth’s magnetic field, NASA’s WIND satellite is exploring L1.

Lagrange points behind the moon

There are also Lagrange points in the Moon-Earth system. However, they have less scientific importance than strategic or military ones. In January 2019, a man-made object landed on the far side of the moon for the first time: the lander and rover “Jade Hase 2” of the Chinese mission Chang’e 4. Since the far side is always turned away from the earth, direct radio contact is never possible. Therefore, China positioned the Queqiao relay satellite at Lagrange point L2, 65,000 kilometers behind the moon. From there he could pick up the signals from the rover and transmit them to Earth.

So Queqiao, parked at the L2 Lagrange point, rotates around the Earth along with the Moon, just a little further out. However, the satellite is not positioned exactly at point L2, but in an orbit around L2. Directly at L2 it would be unstable, would drift away. However, within a spherical sphere, the “halo”, it orbits the L2 with small course corrections on repeatedly shifted orbits and has radio contact with the far side of the moon and with the earth.

The race for the moon arouses the desires of the military

The US military is also targeting the Lagrange point. And its counterpart, L1, which is around 58,000 kilometers from the moon. The “Defense Deep Space Sentinel” satellite could be launched this year. With a solar-electric drive, it is to maneuver from a geostationary earth orbit into various lunar orbits and around the Lagrange points.

From 2025, the Cislunar Highway Patrol System mission, which is also military, is to fly around one of the two Lagrange points. And DARPA, the Pentagon’s research arm, wants to test thermonuclear propulsion for high-speed maneuvers between the Earth and the Moon. The main goals are to monitor and control the cislunar space and to track flight movements taking place there.

Cislunar is what the military calls the space in which they have hardly been active so far: between the geostationary earth orbit at an altitude of 36,000 kilometers, up to which space travel takes place close to the earth, and the moon, which is on average 384,000 kilometers away, including the L2 space behind the back. Since NASA is planning the permanent, manned return to the moon as part of its “Artemis” and “Lunar Gateway” programs, the US military wants to protect future civilian research around and on the moon. Apparently in front of China, which after the success of its unmanned moon missions – especially Chang’e 4 with the long-functioning rover on the back and Chang’e 5 with the retrieval of soil samples – is working flat out on further missions. The People’s Republic wants to start building a lunar station much earlier than planned and will work with Russia to do so.

The USA, on the other hand, has been swearing by common standards for lunar exploration in its “Artemis Accords” partner countries since October 2020. This also includes the establishment of security zones, which is controversial under international law, to protect commercial interests. Experts such as political scientist Michael Byers and astronomer Aaron Boley see risks in the new race and warn against military activities on the moon and the Lagrange points. “The boundary between Earth orbits and cislunar space presents a clear line upon which a commitment to demilitarization could be based,” they write in an article for the Bulletin of the Atomic Scientists.

Lagrange points around the Sun, Jupiter and Science Fiction

Physics knows a total of five Lagrange points. Since they lie between all possible celestial bodies, countless L-points exist in our solar system. For example, the “Trojan” asteroids orbit around L4 and L5 in the Sun-Jupiter system, which NASA’s Lucy probe, launched on October 16, 2021, will explore. Science fiction writers love the L3 point Sun-Earth. Permanently hiding behind the sun, an undiscovered planet, counter-Earth, or hostile alien force could be lurking there. Scientists are now clearly ruling out the former, and probably the latter as well.

‘Your Honor’ Season 2 will premiere in January 2023