Homelessness for asylum seekers sparks crisis in the Netherlands

“I have come to listen, not to negotiate.” With these words, Eric van den Burg, Dutch Secretary of State for Justice and Security, appeared on Tuesday in Tubbergen, a municipality of about 21,000 inhabitants in the east of the Netherlands that encompasses nine towns. It is the first place where the Government has imposed on the local authorities the reception, in a newly purchased hotel, of up to 300 asylum seekers that the immigration services cannot accommodate due to lack of space. The decision responds to the absence of a structural plan for the management of the refuge, which was evident on Tuesday night, when some 700 people had to sleep in the open on the land of the national center that channels their requests. The Cabinet treats the situation as a national crisis, and prepares a bill that will force the City Councils to admit these people from 2023.

The hotel has been acquired by the Central Agency for the Reception of Asylum Seekers (COA, in its Dutch acronym), under the Ministry of Justice. It is located in Albergen, one of the towns in the municipality of Tubbergen, and has generated great controversy for two reasons: it is a town with some 3,500 residents who consider the figure of between 150 and 300 refugees in a hotel to be excessive, and in addition the neighbors were not consulted. The first has caused protests for several days, with silent marches, collection of signatures and banners hanging on the facade of the building. The second, that is, the feeling that the population cannot control what happens in their environment: “It causes tensions due to the contradiction between what politicians want at the local level and what the central government is looking for, which can lead to a government crisis”, says sociologist Godfried Engbersen, from the Erasmus University of Rotterdam. In a telephone conversation, he explains that, apart from the large reception center in Ter Apel, with capacity for 2,000 people, there are more than a hundred smaller similar places in the country. “However, some 250 municipalities do not want to participate in this network for now, and that is why it has been decided to buy the hotel in question.” 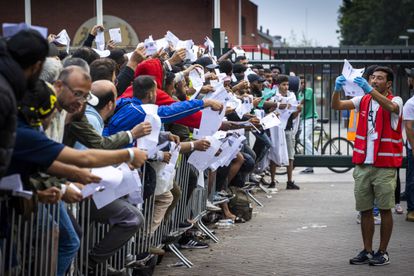 Ter Apel is in Groningen, in the north of the country, and that is where some 700 people fearful of losing their place in the registration queue have slept in the open, according to COA spokesmen. For its part, the Immigration and Naturalization Service (IND), which enforces alien laws, is also having trouble keeping up with applications. The main countries of origin are Afghanistan, Eritrea, Iraq, Iran and Syria.

According to current regulations, when applicants obtain a residence permit, they are obliged to integrate into the country within three years. After passing the language and knowledge of Dutch society exam, these refugees enter the labor market. As in other European countries, Ukrainian refugees are served directly by the municipalities, they do not need a residence permit and they can work immediately. 40% of the nearly 72,000 Ukrainians who have arrived in the Netherlands since the Russian invasion already have a job, according to data from the Employee Insurance Agency (UWV), a government institution.

During his visit to Albergen, Secretary of State Van den Burg admitted that the government had made mistakes. That once the 2015-2016 crisis was over, with the war in Syria, “many refugee reception facilities were closed.” “We should have kept the necessary ones,” Van den Burg said, but was adamant about buying the hotel. His words illustrate the diagnosis of the situation made by the sociologist Engbersen. “When there are waves of refugees, the necessary infrastructure is prepared to absorb them. If the figures drop, a part is dismantled and the physical places of reception and also the knowledge acquired are lost. What is needed is a structural network of reception centers throughout the country, which could be expanded, reduced or adapted, but without disappearing”, he points out.

Asylum seekers who already have a residence permit, on the other hand, face the current lack of affordable housing in the Netherlands. In your case, it can translate into months of waiting in temporary stay centers, with the consequent cap for those who are arriving. The search for a house is a national problem, more visible in big cities like Amsterdam, Rotterdam, Utrecht or The Hague.

According to Frank Neervoort, COA spokesman, in 2021 they received 35,000 people. Now they serve about 43,000. For 2023, they calculate the figure of 51,000. The agency has 140 reception rooms, and another 15 homes, each with a capacity for 20 unaccompanied minors. Nearly 15,000 asylees with a residence permit are waiting today to be assigned a home, and the agency’s proposal is this: “Increase the reception centers, especially large ones for long stays, and that they be distributed equitably throughout the country, along with a stable asylum policy.”

Godfried Engbersen recalls that the Netherlands, like other European Union partners, have signed international agreements on asylum. In any case, he indicates that scenes like the one of 700 people sleeping in the open air “are typical of countries without a structural policy, such as the one that Canada does have.” Although he acknowledges that it is a sensitive issue “since a part of the population, especially in small places, may think that too many refugees arrive”, he dismisses models such as Denmark’s [en 2021, se aprobó allí una ley que prevé abrir centros para solicitantes de asilo en países fuera de la UE]: “They don’t seem suitable because of their hostility,” sums up Engbersen. Although this expert indicates that it is necessary to distinguish between people who come for humanitarian reasons or in search of work, he also considers that “the key lies in the dialogue with the municipalities and with the people, because in the end the situation ends up being balanced” .

Interview: How can energy be saved quickly and sustainably in IT?