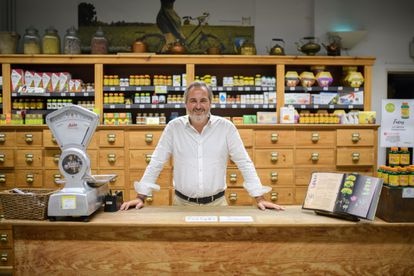 Several women reached an agreement in 1926: “María Fornés, my great-grandmother, bought the business from the Rivelles sisters so that my grandfather could run it,” recalls José Navarro Catalá. The business he is talking about was an herbalist open since 1771 in the center of Valencia, a natural apothecary that supplied remedies based on plants from the mountains of the Mediterranean façade —Aitana, Mariola, Calderona— or in the Maestrazgo region.

It is difficult to get an idea of ​​what that first store was like 251 years ago. “The pharmacy as we know it now did not exist,” Navarro contextualizes. What there were were places full of jars, boxes of herbs and glass vials with ointments like the ones that were stored in the Real Botica that Felipe II ordered to be built in 1594 in the now-defunct Alcázar of Madrid. As you know, until the 20th century that business was in the hands of two different families.

After the purchase of the Navarros, the store remained open until it was the turn of his father José, who entered in 1960 to work with a modernizing air. He proposed to compose specific products according to the pains of each client. “That led him to have many queues in front of the door, because the herbs were sold in large bushes and had to be undone.” He began to add honey, wheat germ or magnesium to his catalog, not without family resistance. “My grandmother Emilia was totally against it, she said that this was losing the essence of the business,” he smiles.

Then came wholemeal bread, cookies, and later products for diabetics, celiacs or low-fat foods. After launching democracy in Spain, the Navarros added the first bio products, and shortly after they embraced the boom of certified organic food. “We began to offer yoghurts, juices… In the year 2000 we set up what was then the largest supermarket in Europe of its kind, on Calle del Arzobispo Mayoral in Valencia.”

In the current generation the company remains family in the most traditional sense. “We want to continue maintaining the character that has brought us here. My father had two brothers who did not want to continue in the business. He kept it and the branches were pruned so that the tree would gain strength. The same thing happened in my case: we chose between my sisters and me who should continue, and my mother and I have stayed in front, although she is retired. When their children grow up they will also have to decide who stays in the company and who does not. But that will take many years.

With 48 stores open and a turnover of 39 million euros, Herbolario Navarro is the modern version of a herbalist combined with a natural products store and organic supermarket, including fresh food. They aspire to end the year with fifty open stores following the “oil stain” model, expanding to places where they already have a presence and brand image. On that path they took over the Madrid premises left by the French chain Bio c’ Bon, which entered the competition in 2020 (Carrefour kept the premises of the neighboring country). But they are in no hurry to grow up. They know that large distribution presses by feeding their lines with an increasingly wide variety of organic, vegan or vegetarian products. And, in addition, they have other competitors opposite, such as the Veritas chain, which is well established in Catalonia. “In Madrid our stores work very well. The next openings will be in Valencia and Palma”, says the CEO. The one in Valencia will open on September 22 in the commercial area of ​​Jorge Juan, where there used to be a Decathlon.

Although they sell more food products, they have added value in the herbal branch, now with plants in many presentations, such as tablets or oils. “We try to make them of national origin. The zero kilometer concept is very important, avoiding transport contamination, promoting local commerce”. Ten years ago they opened a logistics center in Valencia to manage refrigerated food and a year ago they added fruit and vegetables, trying to source directly from farmers. They also have their own brand production, in addition to the one they distribute from niche brands, both in cosmetics and dietetics. How are so many suppliers controlled? “It may look a bit complicated from the outside, but you know who works well and who doesn’t. In Europe there are some very strict control organisms”, answers Navarro.

All the chain stores are owned. Between 2001 and 2008 they tried the franchise model, but it failed them, and when the Great Recession began they decided to give carte blanche to their partners. “We were not able to convey love for the business,” summarizes the manager when talking about that stage. With 350 employees on staff, he admits that inflation has affected them less than conventional distribution. “It is also true that our prices were not that low. They are rising between 4% and 5%, but we must bear in mind that we have been lowering prices for between 5 and 10 years due to the increase in product consumption.” He defines his clients as people sensitive to the recovery of the territory, the good treatment of the rancher or farmer, who seeks the genuine flavor of food. “An artisan fried tomato, a tree-ripened vegetable, some bananas from the Canary Islands… For example, a Michelin-starred restaurant in Valencia whose name I cannot say buys all the chicken carcasses from us to make its broths.”

Where they do not compete too much is in the digital channel, although they admit that they are doing “moderately well” with a turnover of around one million euros. “We are focused on providing good service. But there is such a big price war that makes companies unprofitable. Instead, we have to be, we have to seek profitability and be sustainable”. He is referring to the giants who can afford to lose money at the cost of gaining a foothold in the market. With that slow pace they plan to continue advancing. “Our vision is to be a national benchmark, and Spain is very large and extensive. In Bilbao we have two stores, but there is room for more. Or in Dénia, which has 34,000 inhabitants, but a lot of tourism”.