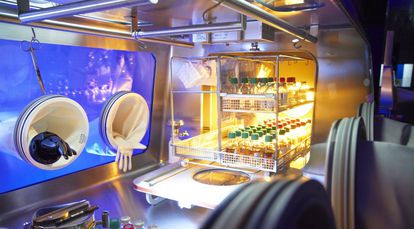 The Stock Exchange is playing a trick on Grifols, the pharmaceutical multinational based in Sant Cugat del Vallès (Barcelona) specializing in homoderivatives. If just before the pandemic, in February 2020, it reached its maximum valuation, with the titles at 34.19 euros, this week the share has dropped from 10 euros, standing at 8.88 euros at the close of this Friday, after a small respite after five days of descent. After the S&P agency downgraded the company’s rating last Friday because its deleveraging is slower than expected, Grifols has lost 11% of its value in one week. So far this year, the collapse is around 47% (while the Ibex as a whole has fallen by 15.8% in the same period), which places the valuation of the titles at 2012 levels.

Following S&P’s decision, on Monday Grifols sent a statement to the National Securities Market Commission in which it assured that its volume of plasma collection is recovering after the restrictions of the pandemic, and in which it announced that it is studying alternative strategies to reduce its debt, which in July was close to 9,000 million euros. It also revealed that it is about to sign two directors “with recognized international experience” for its main activities, and that it will publish its results on a quarterly basis. Five days after the statement, however, the stock has not recovered, which indicates that investors remain wary because they believe that deleveraging is taking place more slowly than expected, and are reluctant to reactivate purchases in the hope that the company defines its strategies.

Grifols’ behavior on the stock market contrasts with its corporate vigor, since in recent times it has chained a series of acquisitions to increase its business volume. To carry out this perimeter increase (in which the purchase of the German Biotest for 2,000 million in autumn 2021 stands out above all), Grifols has followed its usual policy, leveraging itself with the confidence that the payment of the debt will not have difficulties thanks to the cash flow generated by their business. But this dynamism was affected by the pandemic.

In 2021, its net profit fell by 70%, partly due to the difficulties generated by the pandemic in obtaining plasma donations, and partly due to the financial costs of the purchase of Biotest. And in the first half of 2022, the company cut profits by 46%, since despite billing 10.8% more, up to 2,810 million, the financial costs derived from the acquisition of Biotest increased by 66%.

A note for investors from Banco Sabadell recently pointed out that, despite the recovery of the business, doubts about the debt “will remain until the measures are specified”. The bank’s analysts consider that, despite the fact that Grifols’ current listing invites a capital increase, this is “unlikely” because it would dilute the management weight of the Grifols family, and they recall that a sale of assets cannot be ruled out , such as its participation in Shanghai RAAS.

Santander analysts, for their part, affirmed in a note last Monday that the measures announced by Grifols are not enough for the market, which is asking for a substantial change. They also see selling their stake in the Chinese company as a relief option.