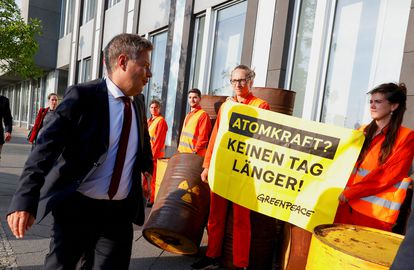 The Minister of Economy and Climate, Robert Habeck, passes in front of a poster that asks not to prolong nuclear energy in Germany “not one more day” on the way to the press conference that he offered this Monday in Berlin. MICHELE TANTUSSI (REUTERS)

Germany remains firm in its decision to abandon nuclear energy as Chancellor Angela Merkel agreed in 2011 after the accident at the Japanese Fukushima plant, but will make a short exception and only in case of emergency. The serious energy crisis caused by the Russian invasion of Ukraine has forced the coalition led by the Social Democrat Olaf Scholz to make a concession. Two of the last three reactors that are in operation will remain “in reserve” until mid-April, the Minister of Economy and Climate, the green Robert Habeck, announced on Monday.

Berlin has changed course after receiving the results of a “stress test” that it commissioned the four operators of the German electricity network to find out how prepared they are for different energy restriction scenarios. The test has yielded “surprising results,” said Habeck, head of a party that has opposition to nuclear power in its DNA. Two reactors on standby could “make a difference” for grid stability in southern Germany, he said.

A previous report commissioned in March determined that the three plants were irrelevant – they currently provide 6% of the electricity consumed by the country – and that is why Scholz maintained until a few weeks ago that the disconnection would be done in a timely manner. However, the more than probable restriction in the supply of Russian gas forced a re-evaluation of the situation. Waiting for the result, and before a population mostly opposed to atomic energy, the foreign minister prepared the ground last month by saying that “perhaps it would make sense” to keep the plants open.

The two plants that will remain available beyond the planned deadline are in the south of the country, in Bavaria (Isar 2) and in Baden-Württemberg (Neckanwestheim). The third plant, Emsland, will be disconnected from the grid on December 31. Habeck, who has been very pressured by his own party to adjust to the schedule of the nuclear blackout, assured at a press conference that in no case will new fuel rods be purchased to prolong the operation of the plants.

Disputes in the government coalition

The turnaround of the coalition government of Social Democrats, Greens and Liberals is preceded by abundant internal and public discussions about the need to keep the reactors operational. The SPD was willing to prolong the activity but only for a few months, while the Liberals were betting on loading the reactors with new fuel and even reactivating plants that had already been disconnected from the grid but had not yet begun to be dismantled. The opposition of the Christian Democrats also defends this last option. Its leader, Friedrich Merz, believes that the three plants that closed last year should be reopened.

“Security of supply in Germany is high. We have enough energy, ”Habeck assured at the beginning of his intervention. The vice chancellor also listed different factors that are exacerbating the energy crisis, in addition to the restrictions on Russian gas, such as the drought, which is reducing hydroelectric production, and the fact that half of the French nuclear power plants are currently closed.

Recent polls suggest that the traditional and vast majority of Germans opposed to nuclear power would be in favor of temporarily continuing to operate the last plants. But Habeck reiterated that the objective is to abandon it as soon as possible. “It is a high-risk energy source that leaves behind highly radioactive waste that is a burden for future generations,” he noted. An unlimited extension of its operation would be “indefensible”, he stressed.

Germany is making enormous efforts to reduce its dependence on Russian gas. In just six months the share has gone from 55% to 9%, according to data from the State Agency for Networks. Currently between 10 and 15% of electricity is produced from gas. Faced with the threat of a closing of the tap by the Kremlin, Berlin decided months ago to increase the use of coal, despite being the most polluting fuel.

Last week the gas company Gazprom announced that its Nord Stream gas pipeline, which links Russia with northern Germany through the Baltic Sea, would not pump gas again after a three-day maintenance stoppage. The authorities assure that the country is “prepared” despite the fact that its economy depends largely on gas. Germany “will be able to face this winter,” Scholz reassured the population this Sunday.

Roughly half of German homes are heated by gas and it is feared that many families will struggle to afford high heating prices in the colder months. The Scholz government announced yesterday a third aid package worth 65,000 million euros that includes single payments to retirees and students to meet energy bills.