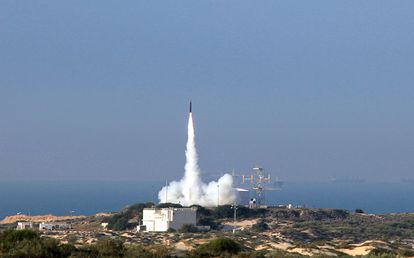 Germany wants Spain and other European partners to join the European Skyshield (“European Sky Shield”), an initiative that aims to integrate the anti-aircraft defense systems of EU countries to deal with the threat of Russian missiles, according to German Defense Ministry sources. The initiative was presented on August 29 by Chancellor Olaf Scholz in Prague as Berlin’s contribution to European defense and a sign of its new leadership in a field in which it had always remained discreetly in the background behind Paris. .

The Secretary of State for Communication denied this Tuesday night that Spain “has received any proposal or communication” to be part of the European anti-missile shield, although the German ambassador to Spain, Maria Margarete Gosse, declared to Cadena Ser, that it was already they have held two meetings with Spanish officials “at a relatively low level”. “Surely it will be discussed at the summit [que hoy presidirán Pedro Sánchez y Olaf Scholz en A Coruña] It is an issue that may be on the table. We are probing,” she added. The meetings have not been held only at a technical level. The German Secretary of State for Defense Thomas Hitschler, who visited Spain last week, discussed the initiative with senior officials from the Ministry of Defense, as different sources have confirmed to EL PAÍS.

The invasion of Ukraine has led Germany to review its anti-aircraft defense system, structured in different layers (high, medium and low level) and has detected huge holes in the first two. One of the most urgent to cover is defense against ballistic missiles, a threat that until now was only contemplated coming from countries like Iran, but not from a neighboring power like Russia. Germany is already in talks with Israel to acquire the Arrow 3, a system capable of intercepting missiles outside the atmosphere, Israeli Prime Minister Yair Lapid confirmed during a visit to Berlin on September 12.

The cost of the Israeli system amounts to about 2,000 million euros, according to Bloomberg, which would come from the 100,000 million fund approved by Berlin to modernize its Armed Forces. Scholz has offered its neighbors (the Baltic and Scandinavian countries, the Netherlands or Poland) to join the system and develop it jointly, although making more modest contributions than Germany, which would bear the bulk of the investment. Spain is far from the Central European theater, but Berlin’s will is to design an anti-aircraft defense architecture integrated into NATO, whose anti-missile shield has its naval component at the Rota base (Cádiz).

This is one of the issues that will be addressed at the Spanish-German summit chaired this Wednesday in A Coruña by President Pedro Sánchez and Foreign Minister Scholz, with the assistance of 15 ministers, including the Minister of Defense, Margarita Robles, and her counterpart, Christine Lambrecht. What most worries these last two is the crisis in the FCAS program (Future Combat Air System), in which Germany, Spain and France are involved in equal parts. It has been a year since the contracts for phase 1B, the development of the prototypes, should have been signed, but the program is blocked by the disagreement between the French company Dassault and the European company Airbus – which represents Germany – about the design of the fighter jet. sixth generation NFG (New Generation Fighter Aircraft), core of the system.

The three countries have awarded their companies bridging contracts to maintain the teams of engineers working on the program (31.7 million euros for Indra and Airbus in the Spanish case), but industrial sources warn that the project may fail if At the end of the year the contracts are not signed and the corresponding items are included in the 2023 budgets. The three countries plan to invest 8,500 million (2,700 corresponding to Spain) in the program until 2027, although the final cost, including production, You could multiply this number by 10.

Spain is helplessly witnessing the fight between the two greats, while sources from the German Ministry of Defense allege that “this is the moment for companies”, alluding to the talks between Airbus and Dassault. Even so, they admit that “something can be done from the governments” since it is a “strategic” project. Lambrecht met on the 23rd with his French counterpart, Sébastien Lecornu, to try to prevent the main defense industry project from sinking. Many see the Franco-German summit at the end of October as the last chance to save it.

Beyond the industrial programs, Robles and Lambrecht will discuss the evolution of the war in Ukraine and the military support that both countries are providing to the kyiv government. Berlin’s reluctance to deliver Leopard tanks to Zelensky (Germany does not want to be the first country to supply tanks to the Ukrainian Army) stopped the Spanish intention to provide several dozen old armored vehicles of this model stored in Zaragoza. Faced with the refusal of Berlin, which had to give the go-ahead for the re-export, Robles argued that the cars were in a “regrettable” state, while the German government argued that it had not received any formal request from the Spanish, which military experts consider an excuse.

Another issue that will be on the table is the situation in the Sahel. Although Germany formally continues in the EUTM Mali European mission, of which Spain is the main contributor, most of the German troops are deployed in neighboring Niger, within the framework of Operation Gazelle, which has been assigned to the previous one. Germany is still evaluating its continuity in Mali after the Bamako coup junta caused problems in the relief of its contingent in Minusma, the UN mission, and has not yet made a decision. After the French withdrawal, the German exit from the country would prevent maintaining EUTM Mali, which has already been reduced to its minimum expression, at a time when Russia is expanding its military presence in the region.