Gas stations have made fuel more expensive between 0.7 and 3.52 cents since the start of the bonus 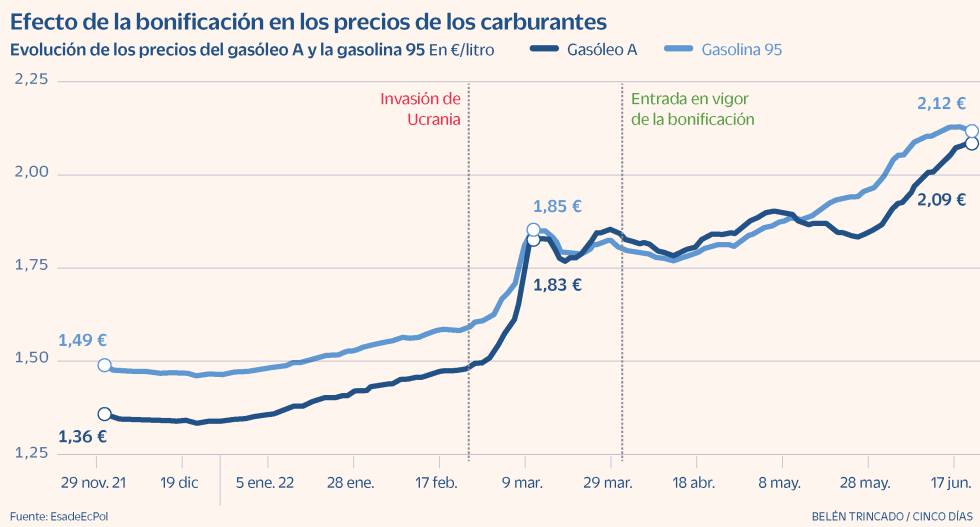 The nearly 11,000 service stations in Spain have responded to the discount of 20 cents per liter on fuel refueling with price increases of varying degrees. Gasoline, on the one hand, has risen by an average of 0.7 cents per liter, while diesel, on the other, has risen by 3.52 cents. This is how EsadeEcPol estimates it in the report How has the fuel discount affected the price at service stations?, published this Thursday by the business school. Today, according to the latest available data, gasoline 95 is around 2.12 euros per liter, while diesel A is close to 2.10 euros.

According to the conclusions of the study, in the two products analysed, it is the gas stations with the lowest prices “that have reacted much more strongly to the change in policy, increasing their prices”. In fact, in the case of diesel, the cheapest gas stations increased its price between five and eight cents per liter. In turn, and “contrary to what one might initially think”, it has been mainly the independent stations that “have captured a greater part of the discount”. Retail distributors that are part of the network of large companies, for their part, have done so to a lesser extent.

The main hypothesis used by EsadeEcPol to explain this fluctuation in prices is a design flaw in the aid promoted by the Executive at the end of March, mainly with regard to independent service stations.

It should be remembered that, in order to apply the 20-cent bonus to the final customer, the stations must advance the amount corresponding to the discount. In order to proceed with their refund, in the first 15 calendar days of the months of May, June and July, the distribution companies must submit a request to the Tax Agency for the discounts made in the previous month. Thus, to give an example, the refund of the amount corresponding to the month of April will not arrive until a month later. Although the Government promoted a mechanism of advances to avoid liquidity problems, and in view of the first data, the result has not been optimal. This measure has meant a cost of some 2,000 million euros until June 30, which will rise to 6,000 million when the measure is extended until the end of the year.

“We believe that the system of advances implemented by the Government to provide the sector with liquidity has proved insufficient in the case of independent gas stations with lower prices, which may have led them to increase their prices in order to guarantee said liquidity.” In the case of large companies, however, “we understand that they can afford to carry out this strategy of not raising prices, or even lowering them slightly in the case of gasoline, since they have the margins derived from their refining activities as well as with previous higher prices compared to independent service stations”. This difference between one station and another, the experts from EsadeEcPol believe, could “undermine competition in the sector”.

Therefore, from the study service of the business school they propose to extend and improve the design of the system of advances to independent service stations so that they do not need to resort to price increases to have short-term liquidity. In that sense, “we propose to extend the system of advances and that returns be made more frequently, every 15 days, replacing the current model where it is made monthly.” In this way, the liquidity of small companies in the sector would be guaranteed, which will help ensure that the discount reaches consumers in its entirety without increasing the level of aggregate expenditure of the policy.