Fruto Vivas dies, the architect who designed the tomb of Hugo Chávez 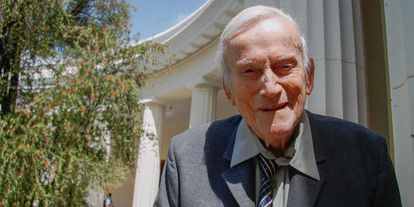 The Venezuelan architect Fruto Vivas, in an image shared by the president of Venezuela, Nicolás Maduro.RR.SS.

The Venezuelan architect Fruto Vivas has died in the city of Caracas at the age of 94. Vivas won the National Prize for Architecture in 1987 and was awarded special recognition at the XI Ibero-American Biennial of Architecture and Urbanism in 2014. With a number of recognized works in his personal portfolio, Vivas is remembered, above all, for being the designer of the Mausoleum of the Four Elements, located in the Cuartel de la Montaña, in western Caracas, where Hugo Chávez’s mortal remains rest since 2013.

Fruto Vivas was born on January 21, 1928 in La Grita, Táchira State, belonging to the Andean region of the country. He graduated as an architect in 1956 from the Central University of Venezuela, in the midst of the dictatorship of Marcos Pérez Jiménez. In the 1960s, when the democratic regime was established, he was a committed political activist, a member of the Communist Party of Venezuela and a cadre close to the Castro insurgent forces that were then operating in the country against the democratic governments.

In the 1950s, shortly after graduating, Vivas had worked with Brazilian architect Oscar Niemeyer on the design of a Museum of Modern Art in Caracas, although the project never came to fruition. From 1966 to 1970 he worked on various architectural developments in the city of Havana (Cuba) inscribed in a project called Mass Architecture under the auspices of the Government of Fidel Castro.

Among the most notable works by Fruto Vivas, the design of the Táchira Club in Caracas stands out; the Hotel La Cumbre, in Ciudad Bolívar; the Plaza Mayor of San Cristóbal; the Santo Cristo Redentor Church in the same city, and the Trees for Life Complex in the city of Puerto La Cruz.

In the year 2000, already with Chávez in power, he had to design one of his most acclaimed works: the Venezuelan Pavilion for the Universal Exhibition in Hannover, which was one of the most praised of that event. The so-called Flower of Venezuela was later decreed as a National Monument and Cultural Heritage of the nation, and installed in the city of Barquisimeto.

Fruto Vivas also agreed to participate, albeit with objections, in some sections of the so-called Gran Misión Vivienda Venezuela, an ambitious massive popular housing program initiated by Chávez in Venezuela in 2010, which had the support of nations such as Belarus and China, and which then it had enormous popular and electoral anchorage.

Fruto Vivas was a resolute supporter and defender of Hugo Chávez, although he also criticized some of his decisions, and accompanied him in his most committed moments as a public figure. The caudillo of the plains knew Vivas’ trajectory as a revolutionary militant and tolerated his objections.

Nicolás Maduro also paid tribute to him during his lifetime, particularly on his 91st birthday. In 2017, Maduro announced the creation of the Fruto Vivas Popular University of the Environment, whose work has not started. Also respected in the confines of the opposition, Vivas was one of the few Venezuelans who had a work that managed to overcome the absurdities of polarization as the natural habitat of national politics.

His contemporary-style work is remembered for the boldness of its geometry and his talent for incorporating the elements of nature, such as vegetation and light, into the individual habitat of man. “The great task we have as architects is to be at the service of those who need it most. I want to draw the attention of my colleagues, architecture cannot serve to enrich us, but rather to bring happiness to the people”, he once stated in an interview with the newspaper El Universal.

The Chavista authorities, the United Socialist Party of Venezuela, several ministers, many politicians and the media, some from the opposition, lamented his death on Tuesday.