Freedom Jazz from death row: “Why don’t we protest before they get killed and not after?”

As Albert Marquès (Granollers, 36 years old) tells it, it even seems simple: “I compose the music and then he adds his voice, or the other way around: he creates his poetry, records it by phone and then I compose the music” . This is Keith LaMar, inmate number A317117 at the Ohio State Penitentiary, United States. And between the two they have composed an album, entitled Freedom first (First, freedom), as a musical plea against the death penalty. In general, but also in particular. LaMar, 53, has been confined to a death row cell for nearly three decades. In isolation, he waits. The music, the concerts that both give around the world, are part of a campaign with a much more limited and pressing objective: that justice reopen the LaMar case before it is too late.

Marquès, who emigrated to the United States to pursue his musical career, was in Berlin this week to participate in the world congress against the death penalty. He has played the piano at the closing ceremony, in front of a thousand delegates, with LaMar on the other end of the phone from his cell in Ohio. They usually do it that way, if they’re lucky, because it wouldn’t be the first time that the guards have prevented them from picking up the phone at the agreed time, without necessarily having a reason. When that happens, they resort to plan b: LaMar’s part is pre-recorded at concerts. “It’s much better that I go live on an artistic level because we improvise together. It’s jazz. And… because the public’s head explodes. It is something very, very strong”, describes Marquès.

It all started in 2020, in the midst of a pandemic, when Marquès was playing on the street with other musicians in his Brooklyn neighborhood. The Black Lives Matter demonstrations were then taking place on the occasion of the murder by the police of George Floyd. There a friend, pianist Brian Jackson, told him about LaMar. His wife had read an article in Mother Jones magazine where LaMar recounted what it was like to live in isolation 23 hours a day and gave readers who were suddenly homebound by the coronavirus how best to cope. The man, accused of killing five inmates during a prison riot in 1993, claimed he was innocent. Marquès remembers that his friend asked him a key question: “Why don’t we protest before they are killed and not after?” 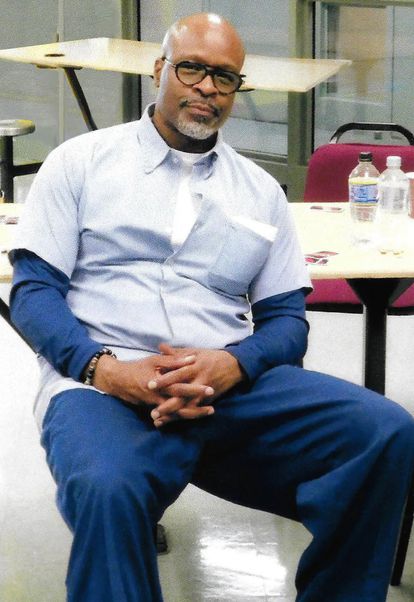 Keith LaMar during a visit by Marquès to the prison where he is serving a sentence in solitary confinement. EL POINT GROUP

The death penalty is still applied in 55 countries, according to the German Foreign Ministry. In 2021, 579 executions were recorded in 18 of them, 20% more than the previous year, according to data from the Ensemble contre la Peine de Mort (ECPM), the French NGO that organizes abolitionist congresses every three years. “The death penalty goes against the belief in reason and human dignity on which our societies are built, whether we come from Europe, Africa, Asia or Latin America,” said Foreign Minister Annalena Baerbock at the inauguration . The appointment in Berlin, the first after the pandemic, has focused on cases of executions of women and minorities, as well as on the increase in sentences in Iran and Saudi Arabia. Along with China, Egypt and Syria are the countries that resort the most to this irreversible form of punishment.

But also in the West capital punishment is maintained. In 15 states of the United States it is applied, and in another 12 there are no executions because a moratorium has been decreed, although the law still contemplates them. “The death penalty is not part of the political or public debate in the United States. And it’s not a partisan debate; there are many States where the democrats are in favor”, says Marquès, who left to live outside of Catalonia at the age of 22 and after spending three years in Paris settled in New York. “It’s not even taboo; That debate doesn’t exist. Two human beings are going to be executed these days. And it is not going to come out anywhere, it is not going to be talked about, ”he laments.

On the album cover you can see Marquès playing the piano and LaMar on a screen in the background, on a video call. In reality, only one of the pieces could be recorded like this, says the Catalan, because LaMar was not usually allowed that way of communication. The logistical difficulties were many. Almost the entire album was recorded by telephone, including a special song that the poet and activist insisted on including: Alabama, by John Coltrane, the song that the legendary saxophonist composed in 1963 after a KuKluxKlan attack on an evangelical church in Birmingham ( Alabama) in which four children died.

LaMar was in 2020 one of the more than 2,400 prisoners in the United States who are serving sentences awaiting capital punishment. The album with Marquès, the only one recorded since death row, has given visibility to his case and a greater chance of reopening it. The profits from the album and from the concert tour – next February they will play in Barcelona (on the 2nd) and in Madrid (on the 24th) – are used to cover the expenses of the lawyers who will try to have their trial repeated. At the time of the riot, LaMar was serving time for another murder that he does admit to having committed when he was still a teenager and dealing drugs. 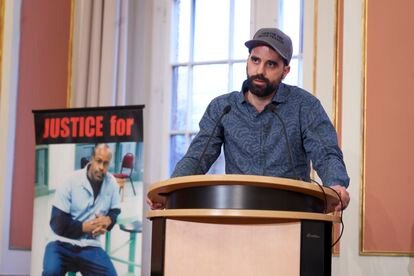 Albert Marquès, this Friday in Berlin during his participation in the world congress against the death penalty.

“I talk to him almost every day. He is one of my best friends,” says Marquès in the lobby of the Pierre Boulez Saal, the Frank Gehry-designed concert hall in central Berlin where part of the congress has taken place. He offers to transfer a couple of questions to the poet, which are answered the next day as WhatsApp audio: “I feel I have a responsibility, even an obligation, to amplify the voices of those who cannot speak for themselves,” LaMar replies. about her role as an activist. “I didn’t feel that way at first, but then I realized that I am one of the few who can speak to a wide audience and tell the reality of capital punishment here in the United States and in the rest of the world. My obligation goes beyond my personal situation ”, he adds.

LaMar’s would not be the first case to benefit from media attention. Melissa Lucio, the first Hispanic woman sentenced to death in Texas (USA), got her case reviewed by the court after a documentary about her life was released. The tape, which was shown during the congress, recounts how her conviction for the murder of one of her 14 children was based almost exclusively on the forced confession that the police extracted from her when she arrested her. After 14 years on her death row, her case is being tried again. She defends that the two and a half year old girl fell down some stairs.

What if the campaign for LaMar works? “It would confirm that the power of music is much greater than I believed myself and what we musicians believe and that perhaps we should be doing more things. But in a certain sense it has already worked”, says Marquès, who has obtained the altruistic collaboration of some twenty well-known musicians, such as Arturo O’Farrill, or Brian Jackson himself. The job is to help LaMar and everyone in his situation, he notes: “Since we were little, people in prison are shown to us as monsters, animals, criminals. With this album we say no, that they are sensitive, creative beings, who can create poetry and beauty”.

Developer Snapshots: Programmer news in a sentence or two