Free returns on the internet are coming to an end

The days of free returns of products purchased online —an advantage that has become widespread in recent years to promote electronic commerce— are numbered. Its high cost, both for company accounts and for the environment, is causing more and more firms to start charging for its management. Inditex, for example, already does so in around thirty markets such as the United Kingdom and Germany (not in Spain), unless the customer takes the garment to a physical store. The rise in fuel prices has made logistics processes even more expensive, and has led many companies to rethink their completely free strategy.

Reverse logistics is one of the biggest headaches in e-commerce. One in three internet orders is returned, according to industry data. “Widespread free returns have to go away eventually. Above all, because we have carbon dioxide emission targets and the logistics of the so-called last mile, the one that goes to the buyer’s house, is not sustainable”, explains Cristian Castillo, professor at the Open University of Catalonia. Home deliveries, which are the ones with the highest cost, account for 82% of the total (the rest are, for example, at shared delivery points, such as those already seen in some shops). “The trend should be to charge for what the service really costs and the consumer should think about whether they need to receive their purchase urgently, because that is very expensive,” he adds.

In the world of fashion, one of the most affected sectors, Inditex has been one of the first large companies to change its return policy. Its star brand, Zara, has been charging 1.95 euros since the beginning of the year for each return that involves going to pick up the package at home or at a collection point. The measure is in force in 30 countries, although Spain is not among them, at the moment. The decision of the Galician group is important because, as a leader in the sector, it sets the path for the rest of the industry. Asked about the effect of this change and if it will be applied to more markets, the company refers to the conference with analysts held after publishing the results of the first semester on September 14, in which the director of Capital Markets of Inditex, Marcos López said that charging for returns has not had any impact on sales. In the countries where this measure has been activated, more and more online users of this brand return the product directly to the physical store and in fewer days, with the consequent cost savings for the company. “Clients understand that it is a growing trend in the industry,” López added.

Free returns have always been considered, together with free shipping costs and speed of delivery, one of the keys to the growth of electronic commerce, whose volume has increased by 263% in Spain between 2014 and 2021, up to the 57,700 million euros, according to the National Commission of the Competition Market. And the question is whether consumers are now willing to pay to return a product. “I don’t think it’s right that they charge if from time to time a user returns something, but if there are people who return a lot, then I don’t care if they have to pay,” explains Raúl Lázaro, 43, who buys frequently online. from clothes and shoes to tools and food.

“I just found out that I have to pay to return a television remote control and that website had never asked me to; Although I am a little indifferent to being charged, I will continue buying anyway because it is very comfortable”, he adds. He says that in some cases when he tried to send a product back to the Chinese website AliExpress, they refunded the amount, but told him to keep what he purchased. It was cheaper to give it away than arrange the return and transport back to Asia.

Inditex is not the only company that has changed its return policy. The Japanese Uniqlo already did it in 2020: it charges 2.95 euros to return online and does not allow to return in the physical store what has been bought online. Meanwhile, El Corte Inglés does not charge for returns made in physical stores or through the Post Office. In the event that they are made through other channels, such as a Celeritas point, the cost is two euros. When it comes to items whose collection is made at home, the cost varies according to weight, with a minimum of 5.90 euros, as detailed on its website, which reminds that this practice is included in the General Law for the Defense of Consumers and Users. Regarding the Swedish group H&M, it offers the service for free for its customers registered on the web; if the purchase is made from a guest account they have a cost of 1.95 euros that is deducted from the refund to be received.

They do not charge for Mango and Zalando returns. Sources from the first company assure, on the one hand, that “Mango has no plans to modify its policy”. On the other hand, the German company, present in Spain since 2019, has chosen to “encourage customers to group their purchases and increase the size of their shopping cart”, that is, it has established a delivery rate for orders below the minimum, as is already the case in other companies. “In clothing purchases, where it is important to try on clothes, it is difficult to get it right,” says Sara Olmo, an 18-year-old student who usually buys stationery and clothing.

She is one of many young customers who shop at Chinese fast fashion giant Shein. This company allows you to return one piece for free from each order and the following have a cost of 4.5 euros for each item, which is subtracted from the refund. Comments on social networks about how Shein sometimes manages refunds without asking for the product to be returned, such as the aforementioned AliExpress case. “If a company charges for returns, people can take it into account, but I think they will continue to buy what they need,” adds Olmo, who is also a user of the Bershka, Amazon and Primor websites.

The cost of reverse logistics for companies is not negligible. “Returns in online commerce can have a relevant impact mainly in terms of cost and margin for retailers and brands, since they can represent between 5% and 20% of the product price, a figure that varies depending on the segment or volume of the product”, details Carlos Sánchez Altable, partner at McKinsey & Company in Spain and expert in digital issues in the distribution sector.

More expensive to return than to deliver

Return costs can double those of delivery, depending on the company, its return policy and the operating process, according to Francisco Aranda, president of UNO, the logistics sector employers. “There are products, for example, that need to be reviewed or even reconditioned to be able to put them back on sale and, in many cases, this whole process is not profitable for companies,” he adds. For this reason, it has begun to charge for returns, “as was done with the cost of bags in stores and, in general, the client is understanding this type of measure.” 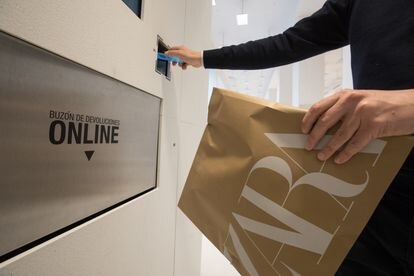 Mailbox for returns of online purchases in the store that Zara opened in April in the Plaza de España in Madrid. The objective is to make it easier for the customer to return their purchase in the physical store, instead of doing it by courier.Victor Sainz

Fashion brands are the most affected. According to a study by the Cetelem Observatory, 36% of those surveyed affirm that they have made returns and, in the case of clothing, it is 54%. But they are not the only ones. The logistics employers account that in 2021 a total of around 725 million shipments were managed in Spain, 6% more than the previous year. The upward trend is also seen in returns: 36% of online shoppers sent a product back in 2021, a figure that rose to 42% in March this year, according to UNO data. Currently, the categories where more changes or refunds occur are fashion, footwear and accessories, which account for around 60%; electronics, with 23% and computing, with 14%.

Returns are a challenge at the inventory level, because all products have to be checked and repositioned, explains the McKinsey partner. Amazon has started deleting the accounts of customers who make a lot of returns. Sources from the e-commerce giant explain that these are “isolated occasions in which the service is used in an abusive manner for prolonged periods of time”, but that in general they do not have problems and that the client always has the right to claim. “The returns process on Amazon.es is easy and free for millions of items, and most of them can be returned within 30 days,” they add.

A practice that has been baptized as bracketing shopping, the purchasing habit of some consumers who purchase several items with the intention of returning some of them, especially clothing and household items, is becoming more and more common. It is, however, a minority practice. “The spectacular growth of electronic commerce in such a short time has fueled the proliferation of what is already beginning to be known as return professionals, a consumer profile that companies are already beginning to closely follow and track,” explains Aranda. Big data is used to personalize costs and the relationship with the user. “In the same way that the customer chooses the business, now the business can also choose the customer,” she says.

Reverse logistics is expensive, but key to internet commerce. The efficiency in the delivery of the product influences the purchase decision, but the return process determines it by up to 73%. Most customers, if they do not find it easy to return a product, go to another website. One of the keys to reducing the management of returns is rewarding the customer to go to the physical store when possible, explains the McKinsey partner. “You can also put a cost on returns or a limit on the volume returned,” he adds.