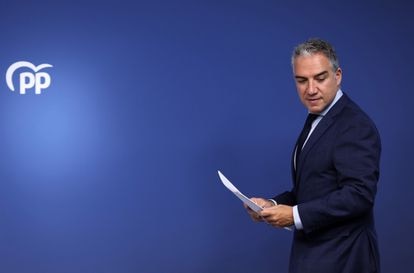 The general coordinator of the PP, Elías Bendodo, upon his arrival at a press conference after the PP steering committee, this Monday in Madrid. Eduardo Parra (Europa Press)

The PP has taken another step in pressuring the Government of Pedro Sánchez so that it does not pardon the former president of the Junta de Andalucía José Antonio Griñán (PSOE), sentenced to six years in prison for a crime of embezzlement in the case of the ERE . The popular leadership has proposed a modification of the pardon law of 1870 to prevent a government from pardoning members of its own party.

The popular ones maintain that if the Sánchez Executive pardons Griñán, it would be granting a “self-pardon”, because the politician was president of the PSOE, although he abandoned the party’s militancy in 2016, when he left the minutes in the Andalusian Parliament when he was prosecuted by the justice . At the moment, the PP limits itself to launching the idea publicly “to stir consciences and open debate”, without the leadership clarifying yet whether it will present an initiative to modify the law soon in Congress.

The PP’s proposal to change the law so that governments cannot pardon politicians from their own party clashes with what popular executives did in the past. That of Mariano Rajoy pardoned a former mayor and three councilors from his party convicted of corruption. This is Tomás Gómez Arrabal, former mayor of the PP of Abdalajís (Málaga municipality of 2,700 inhabitants), and three other mayors of that party were pardoned in July 2012. They had been sentenced to prison for continued crimes of urban prevarication committed between the years 2001 and 2004, when they granted illegal building permits (without an architectural project) to commercial premises. The municipal groups of PP, PSOE and IU requested the measure of mercy for understanding that there had been no intentionality or profit.

The general coordinator of the popular, Elías Bendodo, explained this Monday that the proposal stems from the debate at the PP interparliamentary meeting held in Toledo this past weekend, as a measure of “institutional regeneration”, and linked to the Griñán case. “It is clear that the PSOE cannot pardon the PSOE”, Bendodo defended. “We want to open the debate. Governments have to take measures that can be understood. The PSOE pardoning the PSOE is very difficult to understand. The possibility of pardoning oneself should be limited, ”explained the number three of the PP, who avoided confirming if the popular ones will take the proposal to reform the law to Parliament.

The PP thus increases the pressure on the socialist government not to pardon Griñán, for whom his family already presented the request for a partial pardon of the prison sentence to the Ministry of Justice on September 1 for reasons of “humanity and equity”. It has already been joined by the support of 4,000 signatures, including politicians from the PP and IU, as well as others linked to Andalusianism and Catalan nationalism, as well as a long list of artists, athletes or prominent union members. Another of the convicted, Francisco Vallejo, former Minister of Innovation, Science and Business, sentenced to seven years and one day in prison, has also requested a measure of grace.

Despite the fact that Feijóo declared that he had “no personal interest” in Griñán going to jail, the PP does not give up politically using the possibility that the Government pardons the former Andalusian president. “I ask the Government that before making any decision on this issue, it reads the 1,205 pages of the ERE case sentence well because they are clearly the autopsy of the largest corruption case in the history of our country,” Bendodo said Monday. Feijóo has hardened his position on Griñán after the sentence, because in 2019, when he had not yet been convicted but was already being prosecuted, he defended his honorability. “I feel sorry for Griñán, it seems to me that he is a person who is not known for being corrupt, but he is a victim of the PSOE apparatus. This sentence, more than people, affects the entire structure of the PSOE for at least a decade because there are separate pieces. He is behind a way of doing politics for 40 years and it seems to me that Griñán pays for it, ”Feijóo came to say at a press conference after his government council in Galicia.

The Spanish get together in Barcelona led to a most penalty: that is how the match in opposition to Morocco was skilled

Sergio Scariolo: “Sometimes it is more difficult to make a team with many stars”