Lying on a small bed next to her mother, 14-month-old Aisha Usman is staring off into space, her eyes sunken into their sockets, her ribcage visible. She is the latest to arrive at a treatment center for severely malnourished children in northeastern Nigeria, where violence sparked by Islamist insurgent groups has uprooted millions, forced farmers from fields and caused food shortages. Around 1.74 million children under the age of five suffer from acute malnutrition in the area, according to the United Nations Office for the Coordination of Humanitarian Affairs (OCHA).

Terrorist group Boko Haram and its affiliate Islamic State in West Africa Province have been fighting Nigerian security forces in the northeast for more than a decade, displacing more than two million people and killing hundreds, according to aid agencies. .

At the Damaturu hospital treatment center in the Yobe state capital, Fatima, Aisha’s mother says there are days when her family goes to bed hungry for lack of food. This is because in her village of Babangida, about 50 kilometers from Damaturu, Islamist insurgents forced villagers to leave their farms, she told Reuters. Fatima used to go looking for firewood to sell, but she stopped doing so because it became too dangerous to venture into the forest. 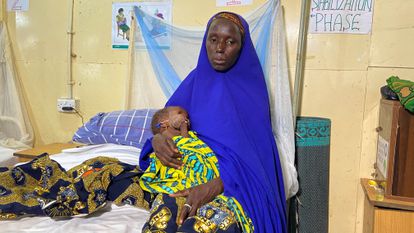 “Sometimes we get food and sometimes we don’t,” sums up the 35-year-old woman. Her daughter weighs 10 pounds, less than half the average weight of children her age. Some of the girl’s organs were shutting down when she arrived at the hospital, according to the medical team. There, she was given an injection and she began to receive food through a tube, with which she slowly began to recover and improve.

OCHA needs €1 billion this year to assist 5.5 million people, including women and children, with food aid in Borno, Adamawa and Yobe States. But the UN body has only raised 42% of the required funds through August, according to a statement. Some international donors have shifted funding elsewhere, including Ukraine, Ethiopia and Afghanistan, which are also facing increased humanitarian needs, according to OCHA.

The United Nations needs €1 billion this year to assist 5.5 million people, including women and children, with food aid in Borno, Adamawa and Yobe States

However, up to 5,000 children in north-eastern Nigeria are at risk of dying in the next two months if funding does not come through, said John Mukisa, nutrition sector coordinator for UN agencies.

Fatima’s bedside, 21-year-old Sahura Hassan took her son to the Damaturu treatment center because he had stopped eating, had a fever, could not sit up and was severely dehydrated. “Most of the problem we see in these areas is due to poor access to food due to insecurity; there is insufficient food in each of the households,” says Japhet Udokwu, the doctor in charge of the treatment center. 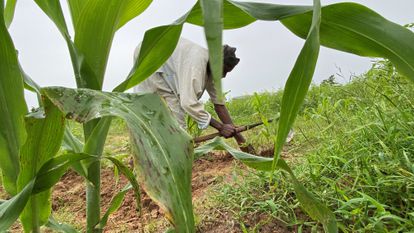 Agriculture is the lifeline of the northeast African country, but insecurity, the increase in the cost of fertilizers and diesel, as well as floods and drought exacerbated by climate change, have combined into a powerful force that is cutting lives short. .

The Nigerian government says it is winning the fight against insurgents in the northeast and that some areas have already been cleared of militants and are safe for villagers to return to farming.

With English editing by Alison Williams.

The school is freed this course from the last limitation by covid: the dining room returns to normal