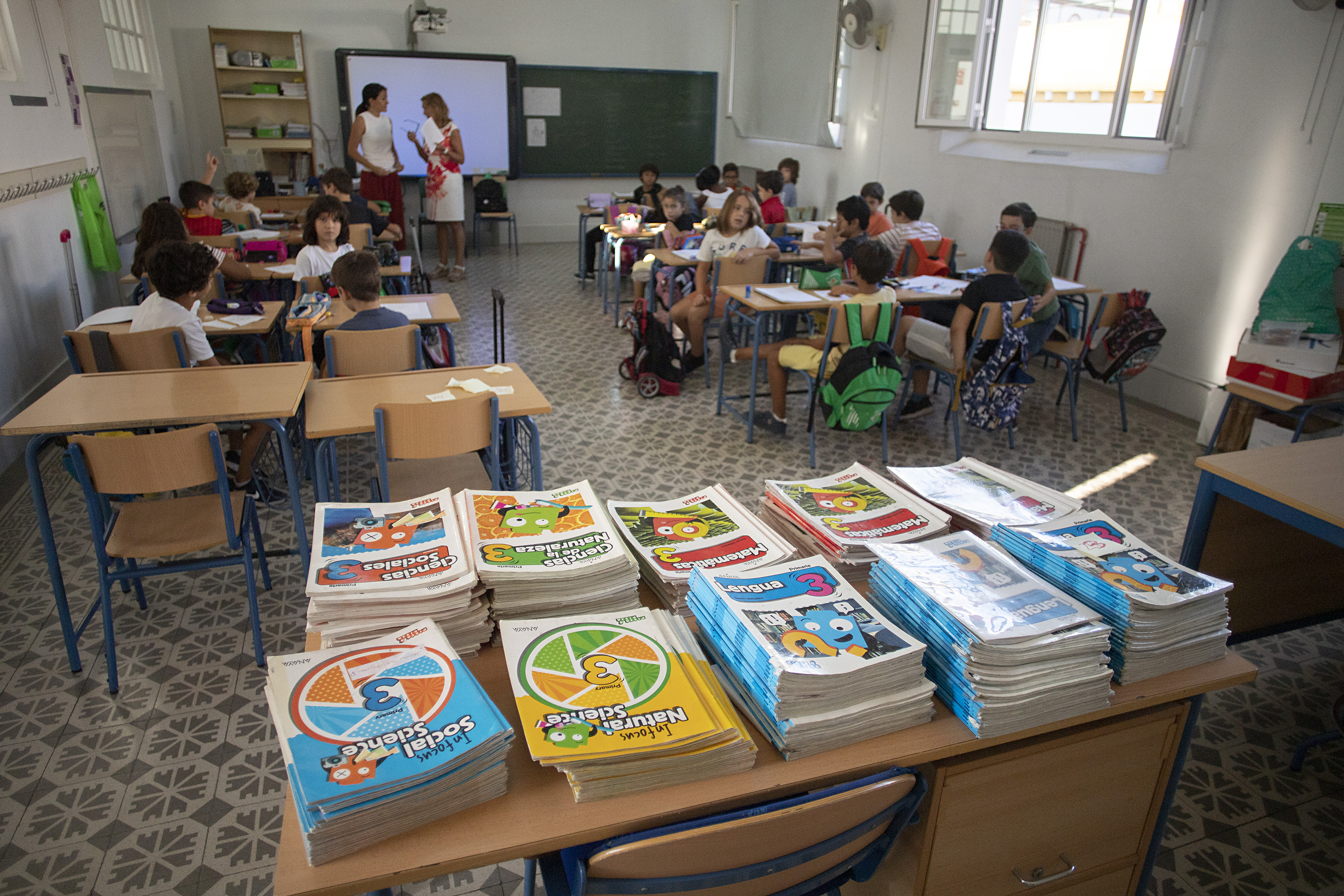 The new educational law that begins to be implemented this beginning of the school year contemplates the introduction of new textbooks due to the change in content. Like the rest of the measures, the replacement of books only affects students in odd courses. Families with children in the first, third or fifth year have had to pay a significant amount to buy them. But the figure has been different depending on the autonomous community and, also, on the educational center.

María Capellán, president of the Spanish Confederation of Associations of Parents of Students (Ceapa), warned this Thursday that the regulatory changes of the new law have not been approved on time in some communities, which have left their educational centers the freedom to choose whether or not to renew textbooks. Galicia, Asturias, the Balearic Islands, Murcia or the Valencian Community have opted for a total replacement, in accordance with what is expected in the application of the law. Other communities such as Madrid, Catalonia, Castilla y León or Castilla-La Mancha have left the decision in the hands of each educational center. Some families have paid, others have not had to.

The decision has a very different impact, in any case, in the case of communities where there is a wide coverage of free textbook bank systems, which have saved most families the expense, such as Andalusia, Valencian Community, Navarra, Madrid, La Rioja, Galicia, Extremadura and Aragón.

Leticia Cardenal, vice president of Ceapa, considers it negative in any case “that there are communities that have totally changed the books.” The confederation considers that books are just one more tool in the classroom, and is committed to the reuse and inclusion of new materials to learn the contents that are new in Lomloe, as well as to promote the initiatives of teachers, classroom libraries and Projects. “If they are changed at least at the same time, all families are equally affected, but this is generating great inequalities and uncertainty,” Capellán protested.

The fact that there are communities that allow the educational center to choose does not mean that there has been a failure in the implementation of the law. According to Ceapa, which represents approximately five million students, it implies that there are educational centers or teachers that have “taken into account the moment we live in and have not wanted to generate an extra cost for families.” “You don’t need to change the books to ensure compliance with the law. Some ministries have provided teachers with the new content material in case they do not want to change the books”, explained the president. As a guide, the confederation has stated that a book that cost 38 euros last year is now around 45.

However, they warn that the disparity has also widened within the communities that have granted autonomy to educational centers. Within the same municipality, there are parents who have had to buy all the books and others, in the center next door, none, depending on the center’s decision. Some have only renewed one or two subjects. Extremadura and Cantabria, for example, have forced the centers to carry out a partial renovation of the books. “It is left to the autonomy of centers to determine issues that generate inequality,” said María Sánchez, treasurer of the confederation. “This has to be regulated by the administrations. It cannot be that an autonomous community has these differences between public centers”, concluded Cardenal.

“We remember that the Spanish Constitution says that basic education is compulsory and free, so there are no excuses such as the autonomy of the center or academic freedom to force the disbursement of even a single euro”, Capellán protested, and added: “We are getting used to families paying for books and school materials without the administrations betting on total free, it is inadmissible.”

Despite the fact that, according to Ceapa, the price of the menu has not changed significantly, they have criticized the differences between autonomous communities in the management of school canteens. Both in the system of scholarships and aid for students, as well as in the preparation of the menu or in the price. They vary from 3.78 euros in Asturias, to 8.50 euros in some schools in the Balearic Islands. The president has asked to unify them, because “there are students with limited economic resources for whom the lunch in the dining room is their only full meal of the day.” Except in some territories, the catering macro-companies are in charge of preparing the meals, which, in the eyes of the confederation, represents a “decrease in quality and quantity compared to the food served in dining rooms managed by the federations and the Ampas”.

Ceapa has also insisted on the importance of a specific mental health care plan, which does not exist “although the number of students suffering from some type of mental illness has increased exorbitantly in these two years.”

The president of the confederation has reiterated that “there are not enough resources”, despite the introduction of the new figure of the welfare coordinator, which she considers insufficient. “A coordinator for each center of a thousand students is not going to have direct contact with the students,” she emphasizes. “With the few days that we have been in the course we still do not know what program they are going to carry out or how the attention of this figure is going to be, but the attention ratio does not make sense”, concluded the vice president.

EU chip production: Taiwanese contract chip manufacturers not off the table in Europe