One of the best exhibitions of the Nit de l’Art of 2022if not directly the best, is the one that has been seen on Calle San Jaime, in the former premises of the now-defunct Altair gallery, and on this occasion promoted by the young gallery LA BIBI, which opened its doors a year ago at its headquarters in Establiments. It is an exhibition of an almost museum nature, that is to say, of a caliber that one hardly finds in a private space, since both the high stature of the two leading artists, as well as the range of the works, which overflows the spirit of the purely commercial, so in use in galleries for some time, they make the exhibition an unusual case and highly recommended to visit. I suppose that if you don’t arrive in San Jaime on time, you can approach these pieces in the central space of the gallery, which, as I said, is located in Establiments.

The Finnish artistic duo is formed by Tommi Grönlund (Turkey, 1967) and Petteri Nisusen (Helsinki, 1962), who are considered the most relevant contemporary artists in Finland, where they live and work (in its capital, Helsinki). They both have a background in architecture (by the way, just like Santiago Villanuevawhich also premiered an exhibition at the gallery Xavier Fiol at the Nit de l’art), and have been dedicated to interdisciplinary creation in contemporary art, architecture and sound art since their first collaboration in 1990.

In 2013 they were awarded the Leonardo da Vinci World Prize for the Arts and in the communication the World Cultural Council (WCC) expressed itself in the following terms: «Its interdisciplinary approach brings together art, design, architecture and science. Both his large-scale spatial interventions in public spaces and his gallery installations are made up of a wide variety of materials and technologies, from the use of objects to light and sound. Nisunen and Grönlund work with space, be it physical, ethereal or sonic. His works tend to change or reshape space, stimulating sensory perception through direct intervention through complex technical installations. Artists are not committed to a single medium, but are endlessly curious, able to move between ever-changing disciplines and approaches.”

The Palma exhibition has been a unique opportunity to approach this extraordinary work, which unfolds from a very powerful conceptual foundation to a formal expression of immaculate workmanship. The piece that opened the exhibition featured a enormous transparent tube where, through a liquid that is also translucent, bubbles that appear to be gaseous descend rhythmicallyturning its movement into a paradox (since gas bubbles in a liquid always take the opposite path). 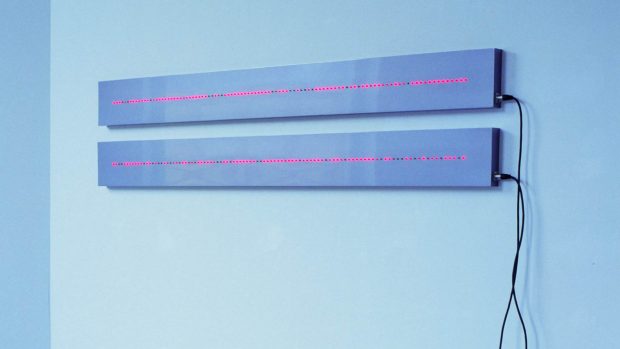 Another of the works of Nisunen and Grönlund.

Another piece that caught my attention was the one with two white plates crossed vertically by a multitude of superimposed stripes, also white. It is an imitation of a barcode, which in our time comes to represent a mass of information gathered in a concise space. Of course, in the case of Grönlund-Nisunen’s work, this blank barcode materializes the pinnacle of misinformation, just the opposite of what a barcode usually is.

The game of paradoxes, in which science and our habits have a lot to do with it, is constant in his proposal. Many of his works have a minimalist character (due to the final design synthesis, so close, in literature, to what poetry means) and an expression close to kinetic art., since many of them incorporate the change in time within their foundations (as in the case, for example, of a piece of light that is shown in a small room, where two bulbs in parallel slowly change color over time). twenty-four hours a day, going through all the chromatic tones of the color spectrum through the interference of temperature). In short, a work full of resources, which is not limited to one medium or tool, and which always places the viewer on the verge of questioning reality, forcing him to reflect.

The work of the Finnish duo, naturally, is present in the collections of very important museums in the world and large private collections (of course, that of contemporary art in Helsinki, that of Luxembourg or the EMMA in Espoo, to give a few examples), in addition to of having participated in the 49th edition of the Venice Biennale (Nordic Pavilion), the 3rd Moscow Biennale, the 5th Marrakech Biennale or the 27th Sao Paulo Biennale, etc. A great contribution, as I say, from the young gallery LA BIBI to the 2022 edition of the Nit de l’art.