The Event Horizon Telescope (EHT) is the most powerful array of telescopes in the history of radio astronomy. In 2017, it carried out the first measurements of black holes. After years of complicated image processing, the first images of the black holes in the galaxy M87 and of Sagittarius A* at the center of our Milky Way were released on April 10, 2019 and more recently on May 12, 2022. In fact, the images show gases rotating around the event horizon well outside the event horizon and emitting measurable radio emissions. The event horizon is the boundary around the point-like black hole, within which no more radiation escapes and within which no measurement is possible.

The more interference, the better

The Event Horizon Telescope (EHT) uses interferometry technology. This is based on the physical effect of interference. If two light or radio waves are superimposed, they can interfere constructively and destructively. So if you combine the signals from two radio telescopes, you can determine the position of the origin of the light more precisely from the interference fringes. Almost as if a single giant telescope had made the observation. This virtual giant telescope is as large as the distance between the two antennas, the so-called baseline. Using more distributed telescopes, the longest baseline among two telescopes corresponds to the total virtual diameter. One then speaks of Very Long Baseline Interferometry (VLBI). But not only the length of the baselines is important. During the EHT in spring 2017, eight telescopes worldwide observed the two black holes over several days. “During this time, of course, the earth continued to rotate,” explains Anton Zensus, Director at the Max Planck Institute for Radio Astronomy in Bonn.

“Since the antennas were automatically tracked to the observation object, the baselines changed in their orientation towards the object.” And scientists can use that too. Because the observation object, the measurable region around the event horizon – with Sagittarius A* this is after all a diameter of 24 million kilometers – appears from Earth, at a distance of around 27,000 light years, only as a point. “But we want to see more, look into this point,” says Zensus. “And for this we use as long and as many baselines as possible.” So if antennas distributed around the world capture the radiation of an object over a long period of time, differences in propagation time and angles from countless interference patterns are included in the overall result. Using this VLBI principle, it was possible to achieve a resolution for the black holes that would be able to accurately photograph a donut on the moon.

The imaging of the black holes was the result of extremely complex image processing. While the measurement took a few days, years passed before the images, which delighted the world public, correctly reflected reality. The data that was processed in the process filled hard drives by the crate. “We recorded 450 terabytes of data per antenna, a total of 3.6 petabytes,” Anton Zensus recalls. Several supercomputers repeatedly had to calculate for a long time before the scientists were able to compensate for disruptive effects, from the variability of the black hole to the interstellar medium to the smallest temporal differences in observation and even relativistic effects. The supercomputer of the Max Planck Institute for Radio Astronomy in Bonn, which has a capacity of 1400 desktop computers, was also involved.

In the meantime, 11 telescopes worldwide are involved in the EHT network: “And when we say telescopes, we also mean arrays,” says Anton Zensus. This means that a telescope that is involved in the EHT can itself consist of interconnected telescopes. That was already the case The ALMA system of the European Southern Observatory ESO participated in the EHT as “one telescope” in 2017. ALMA consists of 66 individual dishes, each mostly 12 meters in diameter, which in turn are already interconnected on site at a good 5,000 meters altitude in the northern Chilean Andes. 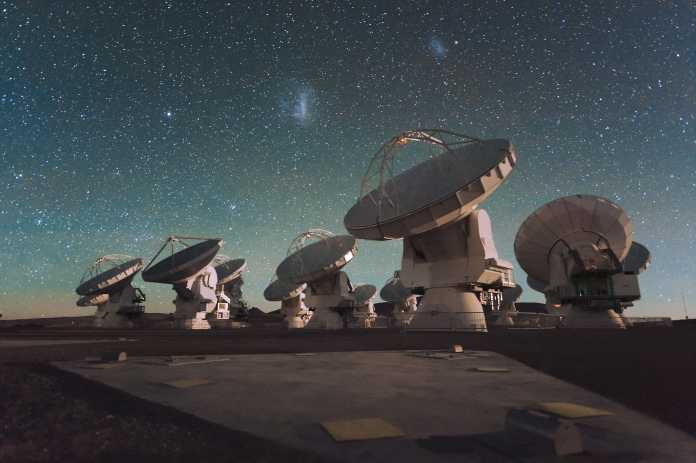 Anton Zensus was involved in founding the EHT and has known the network from the very beginning. He entered radio astronomy and interferometry in 1980 as a doctoral student. “Back then we still used video cassettes as a storage medium,” he recalls. In fact, the interconnection of radar antennas and later radio telescopes dates back as far as the 1950s. At that time, people worked with direct analog coupling using waveguides.

Today, digital data processing and image optimization is the key to increasing precision. This is also the case with the Global Millimeter VLBI Array (GMVA), which has existed since 2002 and in which the 100-meter Effelsberg radio telescope of the Max Planck Institute in Bonn is also involved. GMVA operates at wavelengths of three millimeters, which corresponds to a frequency of 86 gigahertz. For example, it observed distant radio sources such as quasars, blazars and galactic cores, including the center of the Milky Way. For the EHT, the wavelength could be further reduced to around 1.3 millimeters, which also improves the resolution. To do this, it was necessary to make the participating telescopes even more sensitive and to equip them with precise atomic clocks.

The images of the black holes that have been circulating in the media are just the beginning. “We’ve been doing more series of measurements since 2017,” says Anton Zensus. “And based on our experience, we can now reduce the time for image processing.” So we can look forward to even sharper images and even video sequences of the black hole in the heart of our Milky Way over the next few years. In the long term, space telescopes could also be switched on, which would increase the efficient use of the baselines and thus the resolving power enormously.

US Securities and Exchange Commission files charges against Kim Kardashian

Detected in Guadalajara the first case of bird flu in humans, the second in Europe

Rafa Mora speaks about Gerard Piqué: "He is a very arrogant guy"