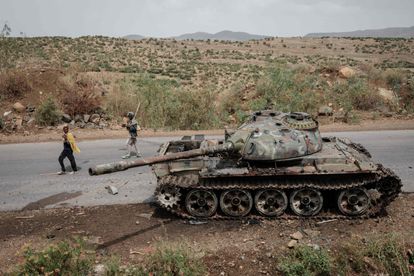 Two farmers walk past an abandoned tank on the road in Dansa, southwest of Mekele, in Ethiopia’s Tigray region, on June 20, 2021.YASUYOSHI CHIBA (AFP)

The Ethiopian Army and the rebels of the Tigray People’s Liberation Front (TPLF) resumed fighting this Wednesday in northern Ethiopia, which is the most serious incident after the approved ceasefire for humanitarian reasons last March and the de facto breaking of said truce. Both sides, facing each other in a conflict that broke out in November 2020 and has caused thousands of deaths, some two million displaced people and a very serious humanitarian crisis, accuse each other of having restarted hostilities. The United States, the UN, the European Union and the African Union have expressed concern about the breakdown of the truce and have called on both sides to restore the ceasefire.

The fighting resumed in the early hours of Wednesday around the city of Kobo, located in the Amhara region, but very close to Tigray, as confirmed by both sides. “At five o’clock, the TPLF has attacked on the eastern front (…) and has broken the ceasefire,” says a government statement. For their part, the Tigrayan rebels, also through a public note, explained that “the enemy (…) has intensified its genocidal war against the people of Tigray through this flagrant violation of the cessation of hostilities agreement that has been in force for a few months ”. The rebels claimed this Thursday to have stopped the advance of the Ethiopian troops. The ceasefire had been announced five months ago, on March 24.

In recent days, both sides had crossed accusations of troop movements. The Tigrayan rebels say that the attack in the vicinity of Kobo was actually a diversion to launch an even greater offensive on the western front, while the Ethiopian Army says that these claims are part of a propaganda strategy to hide the rebel offensive, which they describe as “an open secret”. Tigrayan leader Debretsion Gebremichael once again accused the Ethiopian government, headed by Prime Minister Abiy Ahmed, of maintaining a blockade on the Tigray region and torpedoing United Nations investigations into alleged war crimes.

For its part, the Ethiopian government also assured this Wednesday that it had shot down a plane loaded with weapons for the rebels from neighboring Sudan that was flying in the direction of Mekele, the capital of Tigray, and that it would have violated Ethiopian airspace. However, Getachew Reda, spokesman for the TPLF, assured through his Twitter profile that the shooting down of said plane was “a blatant lie” used to try to internationalize the conflict, as well as an excuse “to justify the genocidal campaign underway ”.

Already on Wednesday night, the executive director of the World Food Program (WFP), David Beasley, accused the rebels of stealing 570,000 liters of fuel that were stored in this region for the distribution of humanitarian aid. “Millions of people will starve if we don’t have fuel to deliver food,” Beasley said through his Twitter account, “This is outrageous and shameful. We demand the return of the fuel right now.” The robbery took place in the morning when TPLF armed men broke into a WFP warehouse in Mekele and seized 12 tanker trucks.

The resumption of the conflict in Ethiopia is once again bringing instability to the entire Horn of Africa region and derailing attempts to reach a lasting peace agreement. Last June, Abiy Ahmed announced the creation of a dialogue committee and his willingness to enter into peace negotiations “without preconditions” with the Tigrayan rebels, while they demanded the release of Tigray and the restoration of transport, communications and public services in the region before sitting down to negotiate. Once again, both sides accused each other of isolating the northern region.

The Secretary General of the United Nations, Antonio Guterres, assured the media that he was shocked and saddened by the resumption of the war and called for the “immediate restoration” of the ceasefire and the start of peace talks. Along the same lines, the United States, the European Union and the African Union called for a cessation of hostilities. The conflict in Ethiopia officially broke out on November 4, 2020 when Prime Minister Abiy Ahmed denounced the attack by Tigrayan rebels on two Ethiopian military bases and declared the start of the war against the TPLF, which rules in the Tigray region and which he had declared himself in rebellion against the federal government for months.

The conflict quickly spread to the neighboring regions of Amhara and Afar and, after the first military victories by the Ethiopian Army, which temporarily occupied the Tigrayan capital Mekele, the rebels reacted and even began an advance towards the capital, Addis Ababa, last November. However, a counteroffensive led by Abiy Ahmed himself managed to stop the rebel expansion and return them to their positions in the north. The March ceasefire, first announced by the Ethiopian government, was intended to facilitate humanitarian aid access to Tigray, where 90% of the population needs food, according to the United Nations.

Checklist: Send emails in such a way that people trust you