The meeting held this Monday between the self-employed associations and the Ministry of Social Security has ended without progress in the negotiation of the reform of the contribution system for this group for the next three years. The Government has not made a new proposal regarding the contribution brackets, and ATA maintains its refusal to accept it. Meanwhile, UPTA, linked to UGT, has insisted that the proposal is “perfectly assumable” and has asked the Government to be brave and “make decisions next week.”

lorenzo love, president of ATA, which is part of CEOE, has pointed out that “the positions are still very far apart” and that the system proposed by the Government again this Monday “is unacceptable.” “Raising the contributions between 33% and 90% to a million self-employed is not acceptable,” said Amor.

In his opinion, it is not acceptable for a self-employed person who earns 1,900 euros a month to have his contribution raised by 1,700 euros a year. “Because it is not only the price. It is that we are paying the most expensive electricity, diesel, and there are self-employed who no longer know where to go. The cow does not give more milk », he has underlined.

“Either the Government approaches the proposal that we had made from ATA or we cannot be in any agreement,” warned the president of the first association of self-employed workers in the country. 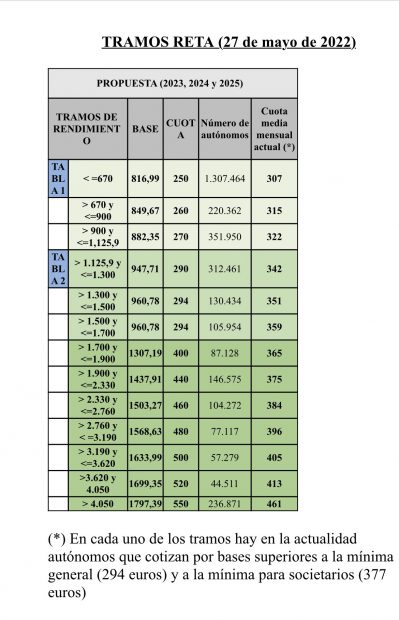 For its part, the UPTA has insisted that the minister’s proposal Jose Luis Escriva -in the image- “it is perfectly affordable” and will make 2.4 million self-employed save up to 900 euros a year in contributions. Edward Abadpresident of UPTA, has asked the Government to “be brave” and “make decisions”, in reference to approving the reform even without the agreement of all the self-employed organizations.

Where there has been progress in this meeting is in the expansion of social protection for the self-employed. As Abad has pointed out, all the self-employed in cessation of activity will receive 50% of the contribution base as long as they demonstrate that they have lost 75% of their income. In addition, the benefit for extraordinary cessation of activity will become permanent.

They launch a chorizo-flavored lipstick

Alonso: “Why not dream of the podium?”

The price of electricity will rise 8.2% this Sunday to 185.9 euros/MWh