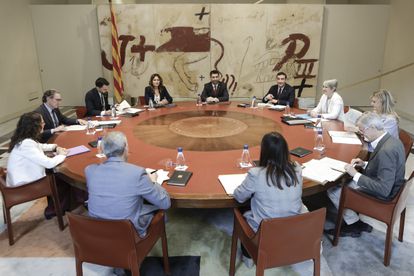 In the background, the vice-president, Jordi Puigneró (centre to the right), and the ‘counselor’ of the Presidency, Laura Vilagrà (centre to the left), chair the weekly meeting of the Government, in the absence of the Catalan president, Pere Aragonès, who is away in New York. Quique García (EFE)

Esquerra Republicana and Junts per Catalunya see the general policy debate in Parliament around the corner and try to arrive at the meeting with some homework done. The parties that make up the Catalan government lower the tone of the reproaches that have been repeatedly exchanged and agree on the need to succeed in exposing the achievements recorded in their road map. The debate will begin on Tuesday the 27th and will end on Friday the 30th, with a parenthesis in between, because the CUP deputy, Eulàlia Reguant, must sit on the defendants’ bench on the 28th and 29th to answer for a crime of disobedience.

Esquerra advocates setting a gimmicky profile and intends to focus on the most pressing challenges, on doing politics “at the service of the people”, as the party outlined in a letter it sent this weekend to all parliamentary groups, except Vox. Meanwhile, the president of JxCat, Laura Borràs, now denies that the general policy debate represents an “ultimatum” for ERC to accept Junts’ conditions to remain in the Government. Speaking to TV3, Borràs said on Tuesday that he had “the will to do the work that people ask for.” Suspended as president of the Parliament, the leader of Junts stressed that “sincerity, generosity and responsibility” will not be lacking to mend the gap that separates them from ERC.

The gesture represents a resignation, after Borràs herself actively questioned the presence of Junts in the Executive. The roundness of the president of Junts forced the week other party officials, identified as the most moderate faction, to publicly position themselves against leaving the Government. This was the case of the Minister for the Economy Jaume Giró, the person in charge of Foreign Affairs, Victòria Alsina, or the veteran Xavier Trias, the best placed to be mayor of Junts in Barcelona.

The spokeswoman for the Government, Patrícia Plaja, assured this Tuesday that the Palau de la Generalitat is “the last of the spaces where the differences between the two parties” that form the coalition have repercussions, since the councilors “make an effort that the day after day of their departments is isolated from party dynamics”. Plaja did not deny the “obvious, known discrepancies” between the two pro-independence partners, but she stressed that at this time the “immediate priority” of all the ministers is the “preparation and approval” of the Catalan budgets for 2023.

Pere Aragonès celebrates 16 months as president, and, after spending weeks arguing about pro-independence strategies, Esquerra is quick to repeat that a “very difficult autumn” is coming and that it is necessary to have a solid plan to be able to respond to citizen needs . Issues such as the poor service of the Rodalies trains crowd the independence movement.

This Tuesday, sources from the Republican leadership highlighted that the debate is going to tiptoe around the issue that has monopolized Catalan politics: the crisis between Junts and Esquerra. There will not be a unitary position in the general policy debate that implies a commitment about articulating a strategic direction for independence. This has been a recurring dispute between the Govern partners and has put Esquerra in an uncomfortable situation when Junts has pointed out the need to include, in that management space, the Consell per la República commanded by Carles Puigdemont from Belgium.

Junts has vigorously claimed Esquerra to unblock that common strategic direction, but with the parliamentary debate in sight, the post-convergence formation has lowered the tone.

After the investiture of Aragonès, there seemed to be a consensus on the need to set up a General Staff of the independence movement, but Esquerra does not feel comfortable now with the Catalan National Assembly (ANC). The entity has harshly criticized the strategy of the parties that rule in the Generalitat, has even accused Aragonès of being “immobile”, and is flirting with the possibility of drawing up a civic list to attend the elections.

Junts also seems to leave in the background, at least for now, other demands that he made to ERC. Specifically, he has demanded to set up a common action front in Congress and that the dialogue with the Government prioritize self-determination and amnesty.

Patrícia Plaja acknowledged on Tuesday that the situation in the Government is “complex”. She alluded to the strained relationship between the two parties that make up the coalition, but she emphasized that both parties are willing to reach agreements. “The clearest proof is that if it wasn’t, the governing coalition would already have broken up,” she said.

How prehistoric DNA helps unlock the secrets of human evolution