Science fiction writers have long imagined that man and machine would increasingly merge. The British company Arc comes a step closer to this idea with the outrageously expensive Vector and lets the bike interact with its rider. The electric motorcycle could easily appear in a Batman movie – if it’s ever built.

Arc advertises its Vector as the “world’s most advanced electric motorcycle”. It also conveys this visually with its monocoque chassis made of carbon fiber laminate (CFRP) on the battery block. The handlebars are below this CFRP structure, the LED headlights arranged one above the other are integrated into it and the rear of the solo seater is extremely tight. This makes the Vector look very flat and elongated. Its wheelbase of 1450 mm and the seat height of 840 mm are rather moderate. 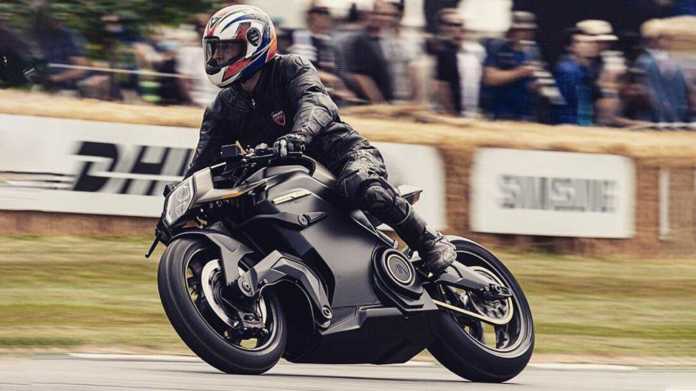 The Arc Vector made its public debut at the Goodwood Festival of Speed ​​in July. Ex-MotoGP rider James Ellison drove the electric motorcycle.

The Ackermann steering with a swing arm made of carbon fiber laminate on the front wheel is striking. The principle of the Ackermann steering has been tried time and again over the course of history on models such as the Yamaha GTS 1000 or the Bimota Tesi, but it never caught on. Arc may have chosen this route because otherwise the monocoque would have been significantly wider.

The rims – also made of carbon fiber laminate – come from BST and carry tires in the usual dimensions 120/70-17 at the front and 180/55-17 at the rear. For the suspension, Arc trusts the shock absorber manufacturer Öhlins and installs a fully adjustable TTX strut at the front and rear. The English manufacturer also chooses high-quality components for the brakes and installs Brembo Stylema brake calipers and discs. The drive to the rear wheel runs via a chain, even if the prototype that was at the Eicma in 2019 still showed a toothed belt. With the power of the electric motor running at 399 volts, Arc is still behind the mountain, rumored to be 103 kW and a whopping 397 Nm at the rear wheel. That’s significantly less than the Verge TS from Finland, but still a case for slip control. Multi-level, of course.

A range of 436 km seems questionable

On the other hand, the manufacturer openly communicates the acceleration from 0 to 100 km/h in three seconds and a top speed of 200 km/h. The alleged range has already been announced: 436 km. With a 16.8 kWh battery, however, this is very unlikely; the specified vehicle weight of 220 kg seems more likely. The charging time of 40 minutes also sounds very optimistic, even for DC charging using the CCS connector located under the fake tank cap on the monocoque.

As if the Vector weren’t already spectacular enough, Arc integrates the rider into the bike and calls it the “Human Machine Interface”. The Arc Zenith helmet, which was created in cooperation with the American manufacturer Hedon, comes as standard. It features a head-up display and a rear-facing camera. If a vehicle appears in the blind spot, it is immediately shown on the display alongside all the other information. The helmet is connected to the bike via WiFi and the various modes can be activated using a controller on the motorcycle or by voice command. The Zenith also ensures a cool head with a three-stage ventilation system. 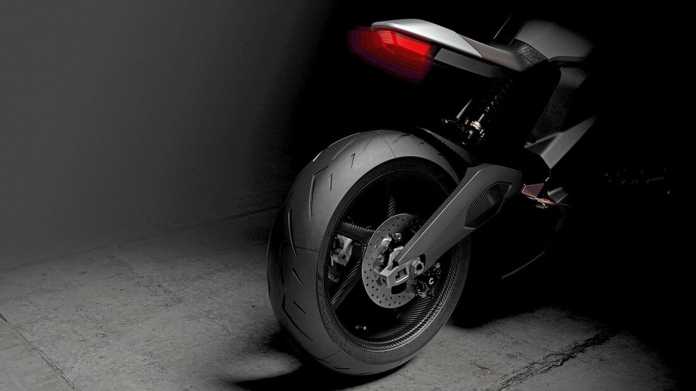 A lot of carbon fiber laminate is used on the Arc Vector. In addition to the monocoque chassis, the rims and swingarms are also made of the lightweight material.

Vibration alerts in the vest

But Arc goes one step further with the protector vest developed with the Knox company. The back protector can vibrate to report dangers. The integrated power supply lasts for two hours, after which the vest can be recharged on the motorcycle. However, Arc development driver and ex-MotoGP driver James Ellison was not wearing his helmet and vest when he silently raced around the racetrack in front of a large audience in the Vector at the famous Goodwood Festival of Speed ​​in early July.

Further details will probably only be known in September, when the first electric motorcycles are to be delivered to customers. Arc intends to build the 399 Vector, which at £90,000 seems very ambitious. It goes without saying that the helmet and the vest are included in the stately sum.

The question remains whether the Vector is really coming and, if so, whether it is equipped with all the promised features. The Arc brand got off to a rocky start. Company founder Marc Truman used to be a manager at Jaguar/Landrover and wanted to realize his lifelong dream of an extraordinary electric motorcycle in 2018. While there were said to be some investors, Truman raised around £1.1million in funding from potential buyers and announced it would move into a production facility in Wales close to the Aston Martin plant. But in late 2019, Arc filed for bankruptcy, and Truman then bought back key parts of the company to keep going.

Prosol, cups of coffee that put Palencia on the world map