Electric car Volvo C40 in the test: power in abundance

It was once written quite aptly about the early Mercedes 200D: It doesn’t start, but drops off. The Volvo C40 is, so to speak, the antidote to this. He doesn’t just start, but jumps forward, so to speak. It does this in a finely dosed manner, but in the worst case it is so brutal that it is easy to forget that almost 2.2 tons are being set in motion here. This is hardly surprising when the driver realizes that 300 kW and 660 Nm can be called up at practically any time. This undoubtedly has a certain entertainment value, although one soon wonders what the actual purpose of this packaging is. The Volvo C40 in the test.

Of course, the drive train in the C40 does not differ one bit from the electric XC40: Here, too, Volvo has installed two synchronous machines, each delivering 150 kW to the front and rear axles. This means that the SUV coupé, which weighs at least 2207 kg, is overly motorized. The acceleration capacity can only rarely be used to its full extent. Volvo calls 4.7 seconds for the sprint to 100 km/h. If you wanted to follow a fully accelerating C40, you would have to bring plenty of power with you.

But as in the SUV XC40, the question arises in the coupé offshoot, what is the purpose of this shell. There will certainly be people who find the C40 somehow snappier than the SUV, but the chassis design is clearly not geared towards sport here either. Rather, the coupé chassis also tries to ensure comfort and shows little ambition to dynamically throw this car around corners. The Michelin Crossclimate all-season tires fitted to the test car in size 235/50 R19 at the front and 255/45 R19 are not designed for maximum grip, and limits are accordingly found early on if the driver wants to briskly around corners. 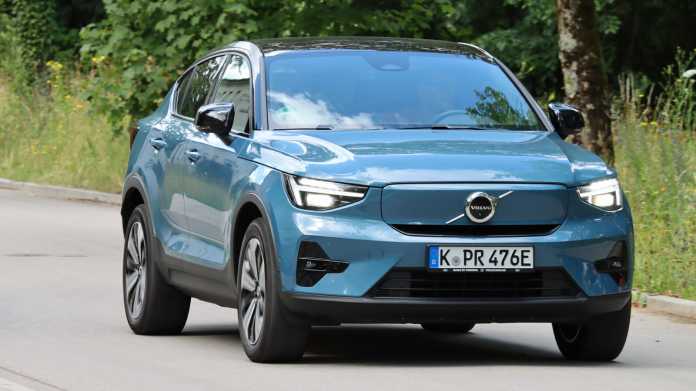 With the C40 Recharge, Volvo offers a slightly sleeker variant of the XC40.
(Image: Florian Pillau)

I find the design of the suspension, damping, steering and tires to be coherent, but the extremely powerful drive and the comfort-oriented chassis do not speak the same language. Both should find each other better in the basic model. As in the SUV, Volvo also offers a small expansion stage of the drive. There is only one electric motor on the front axle, which was then upgraded to 170 kW. This makes the SUV around 160 kg lighter, which is also due to the fact that the battery, at 67 kWh (net), is slightly smaller than in the top model at 75 kWh. Incidentally, the buyer saves between 6500 and 8800 euros. Even with this drive, he certainly does not buy a slow car. The fact that the basic model does not accelerate further at 160 km/h and the top model only from 180 km/h does not change anything in my opinion.

In our test, consumption was just under 20 kWh/100 km with a country-road profile. It was a minimum of 15.8 kWh, a maximum of 25. In the test period at the beginning of July, the automatic climate control sometimes had a lot to do. Unlike in the SUV, the glass roof does not help with ventilation. In the coupe, there is no opening function, and there is also no roller blind for sun protection. However, the tinting is so strong that the interior hardly heats up.

The maximum charging power is 150 kW. It was understandable in the test, but the charging curve drops slightly at around 30 percent. If the memory is half full, 107 to 113 kW could still be read, at 62 percent it was still around 80 kW. 36.4 kWh were recharged in 20 minutes, an increase in the charge level from 21 to 62 percent was displayed. With our average consumption, a range of almost 185 km would be recharged in this time. The conditions for this charging: Summer temperatures, but only a short distance to the charging station. 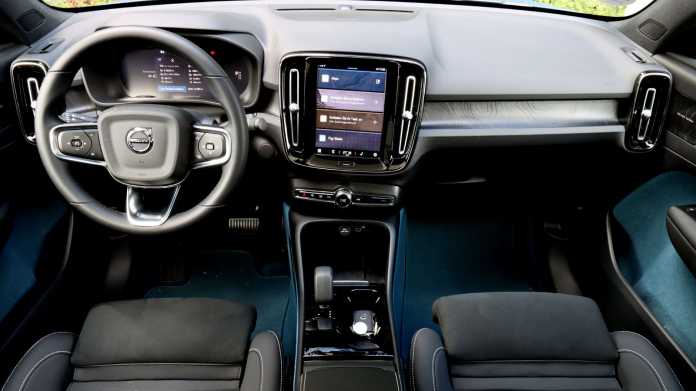 Details such as the air vents or the loudspeaker covers set noble accents. Volvo copied the contour lines in the decorative inlay from Jeep.
(Image: Florian Pillau)

The main differences between the coupe and SUV are the space behind the B-pillar. The headroom is a bit lower due to the lower roof line, as is the maximum loading volume. 413 liters remain under the parcel shelf in the C40, in the XC40 it is 419. We measured 90 cm in depth, 101 cm between the wheel arches and 47 cm between the loading floor and the cover.