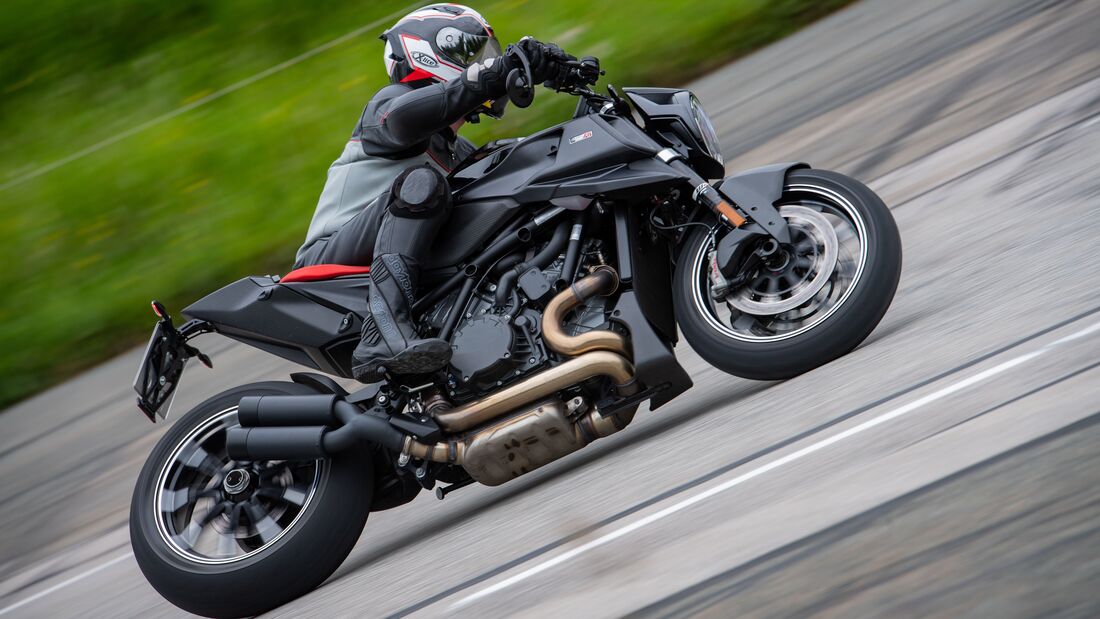 The KTM1290 Super Duke R Evo is a high quality motorcycle. The car refiner Brabus has now dressed them in light carbon fiber clothes and put them on fine shoes, i.e. wheels. MOTORRAD drove an example of the series that was sold out shortly after its presentation.

It is said to have taken one minute and forty-four seconds after the internet ordering portal opened until all 144 copies of the 39,500-euro Brabus 1300 R were ordered and a down payment of 3,000 euros each. If this time specification is not correct, or the ordering procedure may have taken 1.45 or 1.54 minutes, it is well thought out given the size of the print run. One thing is certain: it happened quickly. And it is likely that few of the 77 bikes painted black and the other 77 with magma red tanks were purchased with the intention of actually riding them. In complete contrast to MOTORCYCLE.

You can read this driving report, the 1st part of the biggest motorcycle test of the year, the first driving report of the Lucky Explorer 9.5 and much more in MOTORRAD 15/2022 – printed or digitally available here.

The carbon skin of the Brabus is less “pointed” than the shell of the KTM, so it looks more subtle than the Super Duke, not only because of the restrained color scheme. However, the contact surfaces between rider and motorcycle are designed just as pleasingly as on the KTM. You swing onto the seat with the quilted cover and it fits. The levers are perfectly at your hands and feet. A push of a button and the engine starts. Involuntarily I think of the untranslatable English sentence “The engine breaks into life”, which expresses what is happening much, much better. Thanks to the black double-pipe muffler, the 1301 KTM V2 in the Brabus 1300 R sounds a bit duller, but not significantly louder, if at all, than with the single muffler of the Super Duke – the front muffler remained unchanged. The clutch lever can be pulled with a light hand, and shifting gears is also very easy, as you are used to from KTM. This mighty, formidable and maybe even a little scary bike has the manners of a true gentleman. This also applies to the throttle response in Street and later in Sport driving mode. The brakes are also extremely user-friendly. They master the whole range from slight but noticeable delay when the rubbers are first applied to brute compression from high speeds and always remain transparent and easy to dose.

However, there is one discipline in which the gentleman shows more robust manners: the chassis tuning. The Brabus receives the semi-active suspension of the Super Duke R Evo as a small series, together with the software package that is subject to a surcharge in the KTM. It helps the spring elements with semi-active adjustment of the damping to an automatic within the automatic, as it were, by switching back and forth between different damping characteristics depending on the speed, engine speed, bumps, acceleration or deceleration. All of these characteristics can also be selected and set by the driver. Two comments on this: Even in the “Comfort” setting, the Brabus dampens so tightly that even when driving very quickly, there is no desire for even higher damping forces. I would have preferred to reduce the pressure damping even further on rough roads. If someone wants to drive really fast on the race track with the Brabus, they always have enough reserves. They are probably even enough for a hard race in the blistering heat. Secondly, I have to admit that I couldn’t feel any difference between the comfort and the automatic mode when driving. This corresponds to the experiences of PS colleagues Volkmar Jacob and Fabian Dresler, who tormented a Super Duke R Evo with different settings and speeds on a bad road. The Brabus 1300 R was spared such an ordeal, because at some point I got tired of collecting test impressions like a living data recorder. Instead, I simply surrendered to the driving pleasure, the refinement of the engine, its tremendous acceleration when I called for it from time to time, the full road holding, the excellent brakes. Last but not least, the satisfaction of that little vanity of being allowed to drive something rare and special here and now.

The Brabus is probably more important to convey this feeling than an even more powerful technology that can be used even less by even fewer people on public roads. It’s about the fascination at first sight. For someone who only knows Brabus as a car refiner, the wheels of the 1300 R in the company-typical Monobloc Z design create the connection between car and motorcycle. The sight of visible carbon is no longer as attractive and exotic as it was at the beginning of the carbon age in motorcycle construction, but its matt black surface finish reveals a production process that has been optimized in terms of resin supply and thus also weight. According to the factory specification, the Brabus is five to six kilograms lighter than the Super Duke R Evo, even though its wheels are a little heavier. The rear controls and levers are from Gilles Tooling and they too are probably lighter than the KTM series parts. But whatever the mirrors mounted under the aluminum handlebar contribute to the weight saving, the Brabus should be packed up again in the form of mirrors in which you can also see something. The current solution offers consideration only under significant contortions. In city traffic with dedicated cyclists and scooter riders who are constantly changing lanes, the restricted field of vision to the rear is not without its dangers. So much of this world that it offers better in this respect, should also be a Brabus.