Two days after the FBI searched his Florida residence in search of official documents, the former president of the United States Donald Trump has lived this Wednesday a moment that he had been avoiding for months: his statement, under oath, before the attorney general of New York, Letitia James, the theoretical turning point in an investigation initiated in 2019 for alleged irregularities in her business. The expectation generated by the appearance came to nothing when he refused to testify, invoking the right established by the Fifth Amendment not to incriminate himself, something that his two eldest children, Donald Jr. and Ivanka, also investigated, did not do when questioned in recent days, according to most sources. “I refused to answer the questions, based on the rights and privileges granted to all citizens by the Constitution of the United States,” Trump said in a statement. James’s interrogation lasted four hours, during which Trump answered the same (“same answer”, that is, his protection in the Fifth Amendment) to all the questions.

“I once asked myself, ‘If you’re innocent, why do you take the Fifth Amendment?’ Now I know the answer to that question. When your family, your company and your entire circle become the target of an unfounded, politically motivated witch hunt supported by lawyers, prosecutors and the media that spread fake news, you have no choice,” Trump said in the lengthy statement. “If you had any doubts about that, the raid on my home, Mar-a-Lago, on Monday by the FBI, just two days before this statement, erased any uncertainty. I have absolutely no choice because the current Administration and many prosecutors in this country have abandoned all moral and ethical boundaries of decency.” There is no relationship between the FBI’s indictment and James’s investigation, although the tycoon links them to load the ink on the judicial harassment that he claims to suffer.

The tycoon had confirmed the appearance at the Prosecutor’s Office on his social network, Truth Social, late on Tuesday: “Tonight in New York. Seeing the racist attorney general of the State of New York tomorrow, in the continuation of the largest witch hunt in US history, ”he wrote about what he considers a persecution by the Democrat James, who is African American, to promote his political career. “My great company, and myself, are being attacked from all sides. Banana Rebublic!”. While the Republican invoked his right not to testify, his office published an extensive statement, in which Trump lashes out at James and the United States Government, as well as three video montages in which the prosecutor stated, among other things: “Never I will be afraid to challenge this illegitimate president.”

The businessman was captured by photographers leaving his residence in Trump Tower, next to Central Park, aboard an armored vehicle with tinted windows. The former president’s caravan, surrounded by extreme security measures and howling sirens, headed south from Manhattan to the prosecutor’s office, where he arrived at nine in the morning. Secret service agents shielded access to both buildings, aided by an unprecedented police deployment. The statement was expected to last throughout the day, perhaps even longer, but the former president’s refusal to answer dampened all expectations and returned the ball to the wing of the Prosecutor’s Office. “I have not done anything wrong, that is why, after five years of searching, the federal, state and local governments, together with the fake news media [noticias falsas]They haven’t found anything,” Trump said in his statement.

In the past, the tycoon used to disparage those who availed themselves of the Fifth Amendment. “The mafia embraces the Fifth,” he said during a rally in 2016. “If you are innocent, why do you accept the Fifth Amendment?” He added at the campaign rally, the same phrase used this Wednesday in the statement to explain his refusal to testify. He then referred to the people who had exercised that right during the investigation of Democrat Hillary Clinton for the use of a private email server for official correspondence when she was Secretary of State. Clinton was then her rival at the polls.

Trump had been buying time these months, postponing the declaration again and again, even being favored by the death of his ex-wife Ivana the same week as the previous summons, at the end of July, which forced it to be suspended. But the prosecutor’s office already warned in May that the civil investigation into the alleged makeup of the Trump Organization’s assets was nearing its end, and hoped that Wednesday’s statement would precipitate the conclusions. An imputation of charges cannot be derived from the process directed by James (only sanctions since it is a civil case), but it could reactivate the ailing criminal investigation that the Manhattan Prosecutor’s Office also undertook in 2019 for the same reason: well-founded suspicions of that the Trump Organization misrepresented the value of properties such as golf courses and skyscrapers, misleading lenders and the IRS. 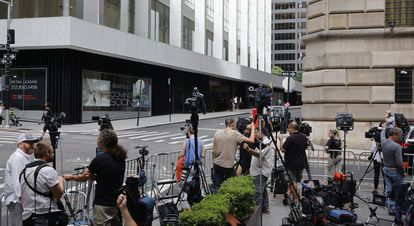 In addition to the possibility of reactivating the criminal case opened by the Manhattan Prosecutor’s Office, which could lead to the accusation of crimes, Trump’s appearance before James could not be more inopportune: he is in the midst of a broad legal offensive, in which to the FBI investigation into the classified documents that the former president was able to take from the White House, join the open case in Georgia for trying to reverse the result of the November 2020 elections and the purging of responsibilities for his involvement in the assault to the Capitol by a horde of supporters in January 2021. Trump faces other minor processes, such as the fiscal makeup of a golf course in the State of New York, hence what happened in his meeting with prosecutor James could tarnish his political expectations, precisely when he assesses his candidacy for re-election in 2024 (had he declared, and lied, he would have risked being convicted of perjury).

In addition, in the umpteenth judicial setback he has suffered in recent days, an appeals court allowed a House of Representatives committee on Tuesday to see the tycoon’s income tax returns, something his lawyers resisted for 19 months. The last hoax spread by his environment reported the hiring plans of 87,000 officials for the Internal Revenue Service (IRS, in its English acronym; Treasury), with a budget of 80,000 million dollars, to fiscally persecute Americans. The weekly newspaper Time has just dismantled the hoax, as an email from the White House collected this Wednesday about the sound and fury of the hoaxes spread by the Republican as ammunition against the Joe Biden Administration.

Trump has always treated the James case, as well as that of the Manhattan District Attorney, as a political harassment operation. About James, he maintains that she persecutes him so viciously to boost her political career, and in fact the prosecutor presented her candidacy for governor of New York after the fall from grace of fellow Democrat Andrew Cuomo, although she withdrew it shortly after. The Republicans, immersed in the primary process ahead of the decisive mid-term elections, have closed ranks with him and assume the political motivation that Trump denounces in all the causes he has open.

Technology moves the world... and the needs of the favelas