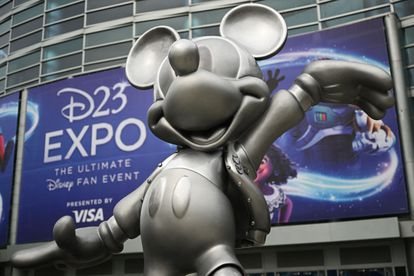 After the stoppage forced by the pandemic, Disney has reopened the doors of its popular convention. The machinery of the entertainment giant has looked well oiled in the first of three days of the D23, which brings together 6,000 fans from around the world in Anaheim, southeast of Los Angeles. The company has revealed this afternoon some details of the main bets that will monopolize movie theaters and its streaming service, Disney +, during the next two years. Among the novelties released are two Pixar films, including the second part of the critically acclaimed and Oscar-winning Inside Out, which will hit theaters in the summer of 2024. The studio founded by Walt Disney has also advanced some keys to Wish, the film that intends to honor the 100 years of the company, which is celebrated in 2023.

Elemental will become, in the summer of 2023, Pixar’s 27th film. Disney bought the animation studio in 2006, whom it considered its competition. From the merger a fruitful relationship was born. And also a school. Peter Sohn, who started out as an animator on Finding Nemo and The Incredibles, will direct the studio’s next film installment. The director, a first-generation American son of Koreans who immigrated to the Bronx, has used part of his family experience to tell the story of a city in which all the elements coexist, despite their differences: water, earth, air and fire.

Pete Docter, who started out as an animator, evolved into a director and now heads the studio, has announced the company’s next project. This is Elio, who will fit perfectly into this era of renewed human ambition for space conquest. It tells the story of the little son of Olga, played by superstar with Honduran roots, América Ferrera, who is obsessed with communicating with extraterrestrials. A mistake causes it to be Elio (Yonas Kibreab) who comes into contact with interplanetary beings, which makes him an unexpected ambassador of humans to the galaxy. “The message is about the importance of being yourself, regardless of whether you feel a little extraterrestrial,” Adrian Molina, the director of the film, which does not yet have a release date, told fans.

The confirmation of the second part of Inside Out has been one of the most anticipated news among the attendees, who wore hats with Mickey mouse ears and wore complex costumes of Marvel heroes or princesses created by the company. Docter has kept the details of the continuation of the Oscar-winning work of 2015. However, the comedian Amy Poehler, who plays Joy in the first installment, was in charge of sharing keys. Among these, that the sequel will add new emotions to the catalog of feelings of Riley Andersen, the protagonist, who will be a teenager. Everything will happen in Riley’s mind.

Pixar has also announced its first television series, Win or Lose, which will be available on the company’s streaming service. The series is about a high school softball team, a sport similar to baseball, that reaches the finals of a school championship. Each of the episodes will tell the story from the point of view of the members of the team: from the coach, played by comedian Will Forte, the players and the umpire (the referee). Six short films from the Zootopia universe will also soon arrive on Disney+, which won the Oscar for Best Animation in 2017 and is one of the most successful at the box office after Frozen.

Wish and the return of the Lion King

Anchored in a strategy that starts from the remake, the sequels and the multiverses, it is difficult to find innovative projects. The Walt Disney animation studio has promised a delivery that gives at least that feeling. Wish starts from the need to create new characters without betraying the roots of the company’s first classics, an origin that is intended to be celebrated with the 100-year celebrations. The animated film is based on the wishing star, a common element that appears in such mainstays as Pinocchio, Cinderella and Snow White (soon to have a live-action movie starring Rachel Zegler and Gal Gadot). In Wish, the star is turned into a silent character with pantomime movements.

The producers affirm that the project, which will be released in 2024, has brought together several generations within the company. This mixes old animation techniques, like hand-painted watercolor backgrounds, with modern effects like 3D. The effect is a bridge between different eras of the company.

Ariana DeBose, who won this year’s Oscar for Best Supporting Actress for Steven Spielberg’s remake of West Side Story, lends her voice to the feature’s heroine, Aisha, who asks the star for help in leading a revolution in her town. the kingdom of roses The play is a musical themed by Julia Michaels, who has composed songs for pop stars like Dua Lipa, Selena Gomez and Pink. DeBose performed one of those songs this Friday, More for us.

Barry Jenkins, the director of Moonlight, has joined the Disney machine. This Friday he visited the D23 stage to present some images of Mufasa, a new twist to the universe of The Lion King, which the company has exploited since the premiere of its animal version of Hamlet, in 1994. Mufasa, who had already Announced in 2020, it is the origin story of Simba’s father and his brother, the villainous Scar.

The studios also showed some images from other productions of the so-called live action. Stand out Peter and Wendy, a new trip to the already very visited world of Never Land by the Scottish writer JM Barrie. Jude Law, who has also joined the Star Wars universe, will be Captain Hook in a cast that promises to launch young performers like Ever Anderson and Alexander Molony to stardom. Rob Marshall’s Little Mermaid, starring Halle Bailey, and a movie based on The Haunted Mansion, one of the biggest attractions at the Disney theme park, are other bets for viewers to visit this fantasy world and never leave the.