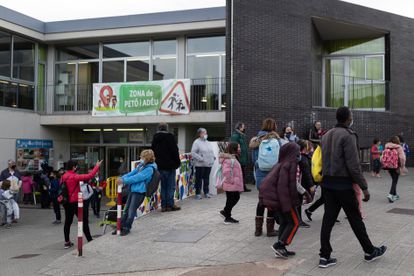 The Turo del Drac school, in Canet de Mar, is one of the educational centers where justice has forced 25% of teaching hours to be given in Spanish in a class.Albert Garcia (EL PAÍS)

The defenders of bilingualism in the Catalan school do not throw in the towel despite the fact that the Superior Court of Justice of Catalonia (TSJC) has communicated that the latest legal changes promoted by the Generalitat —in which the court sees signs of unconstitutionality— prevent At this time, he complies with his sentence that required him to teach at least 25% of classes in Spanish. The Escuela de Todos platform has therefore decided to take the pressure to the streets, calling for a demonstration in Barcelona on September 18. The promoters believe that in Catalonia there is a “clear violation of the linguistic rights of students” insofar as the regional regulations do not recognize Spanish as a vehicular language, something that is required by various rulings of the Constitutional Court, the Supreme Court and the TSJC.

The demonstration, which will take place at the Arc de Triomphe in Barcelona at 12:30 on the 18th, is called by the Escuela de Todos platform, made up of 15 entities, including the Catalan Civil Society and Impulso Ciudadano. Many of them are behind the advice to almost a thousand families who, according to their data, have requested through the courts that the number of hours of Spanish in the school be increased so that their vehicular nature is concretized. According to statistics from the Generalitat, 1.5 million minors are in the education system.

The call, explain the organizers, is justified because “the Generalitat has refused to execute the sentence and the Government of Spain has opposed the execution.” Escuela de Todos believes that the latest law on co-official languages ​​approved by Parliament —questioned by the TSJC and openly supported by the Government of Pedro Sánchez after the last meeting of the dialogue table with the Generalitat— “contradicts the Constitution”.

Last year, the Supreme Court made firm a judgment of the Superior Court of Justice of Catalonia (TSJC) that ordered at least 25% of hours in core subjects to be taught in Spanish —that is, at least one core subject in addition to Spanish Language—, to make effective the vehicular condition that the Constitution recognizes for that language, as established by various rulings over three decades. The Generalitat did not apply the ruling alleging that, in its opinion, a linear percentage cannot be applied to the entire system because the different sociolinguistic realities of the territory advise against it, and that therefore Catalan should continue to be the only vehicular language.

In May, the TSJC issued the forced execution of the sentence, but the Parliament responded by approving a new language law that leaves the decision on what weight to give to each of the official languages ​​in the hands of each educational center, without setting percentages. It defines Spanish as a “curricular” and “learning” language, but not “vehicular”. Escuela de Todos believes that this rule is a ruse that seeks to disobey the court order. The court itself sees in the operation a “fraud of law” and that is why it has elevated it to the Constitutional Court, pointing out that it prevents its 25% mandate from being executed. At the last dialogue table between the Government and the Generalitat, the central Executive expressly supported the text that came out of Parliament.

The world no longer needs the return of The Mechanical Goat, but we do