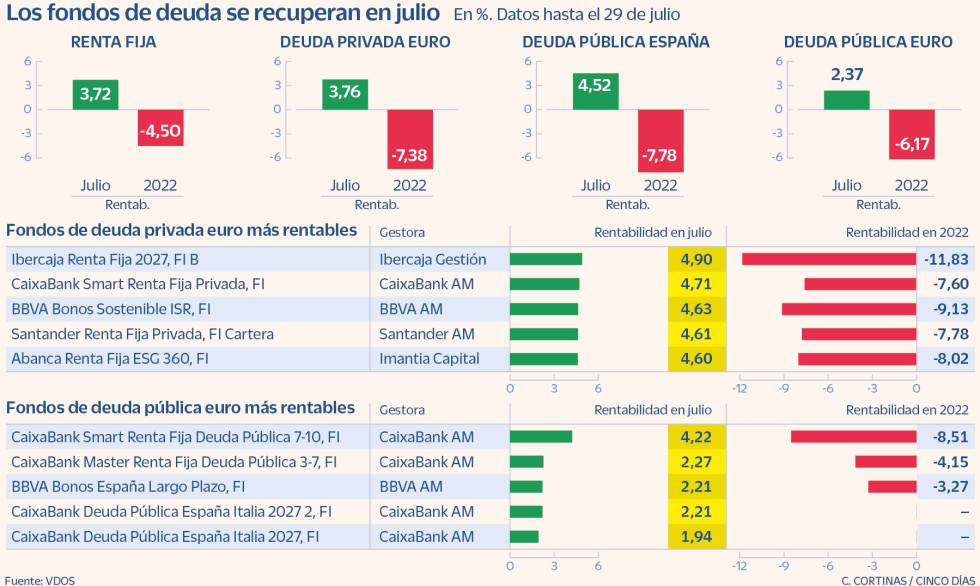 The evolution of fixed income in the month of July has proved right those who thought that after the sudden falls in prices seen so far, it was time to take positions. The bond market is still far from being free of shocks, but the month of July has given a valuable respite and yielded gains that are close to 5% in the best of cases and that are quite an achievement for this type of asset. Although not enough to offset the heavy losses accumulated so far this year.

The profitability achieved by the fixed-income funds that are marketed in Spain was 3.72% in July, according to data collected by VDOS. The gain is extended to 4.52% in those who invest in Spanish sovereign debt, remains at 3.76% in private debt in the euro zone and 2.37% in European public debt funds.

The returns are explained by the notable drop in returns registered by fixed-income assets during the month, which has allowed their prices to rise. Investors had heavily priced in an acceleration of central bank rate hikes to deal with high inflation, even at the cost of sacrificing growth. This fear sent bond yields soaring, paralleling their price decline. However, the market is now beginning to think that, after the rate hikes already announced in July, the central banks are going to moderate the tightening of their policies and rate hikes, in a difficult balance between the fight against inflation and growth protection. The result is that in July the sovereign debt of the euro zone has left a return of 4.1% according to the index prepared by Bloomberg, the highest return in a month on record.

The return on Spanish sovereign debt funds in July, 4.52%, reflects the notable decline in the yield on the Spanish 10-year bond during the month, when it fell from 2.5% to 1.9%.

In the classification by profitability of the Spanish sovereign debt funds in the euro zone in July, the first position is for the CaixaBank Smart Fixed Income Public Debt 7-10, with a gain of 4.22% in the month. And in the first positions also appears the most recent bet of the manager of the bank, the CaixaBank Public Debt Spain Italy 2027, launched precisely to take advantage of the collapse of prices of the sovereign bonds of both countries and that in July has rented 2.2 %.

CaixaBank’s commercial offensive for fixed income funds has led it to be the manager with the most net subscriptions in July, for 365.6 million euros, after having achieved subscriptions for 900 million in May in its new vehicle sovereign bonds of Spain and Italy.

The profitability ranking of the family of Spanish private fixed-income funds in the euro zone shows higher returns than sovereign debt. The most profitable is the Ibercaja Fixed Income 2027, with a gain of 4.9% in July, followed by the CaixaBank Smart Private Fixed Income, with 4.7%, according to VDOS data.

Their good performance is far from compensating for the losses accumulated in 2022. Despite the returns in July, these two funds, the most profitable in their category, have suffered losses so far this year of 11.8% and 7.6% , respectively.

subscriptions. Despite the poor performance of bonds, investors have been contributing fresh money to fixed income funds, a trend that has continued in July, a month that has finally produced positive returns on this asset. Net subscriptions in fixed income funds were 757 million euros last month, according to Inverco data. And for the year as a whole, they add up to 8,638 million inflows, which makes debt funds the undisputed leaders in terms of deposits. In second place are those of the international stock market, with 2,210 million net subscriptions so far this year.