Dani Alves, in his presentation at Pumas: “I am a person who likes to leave a legacy” 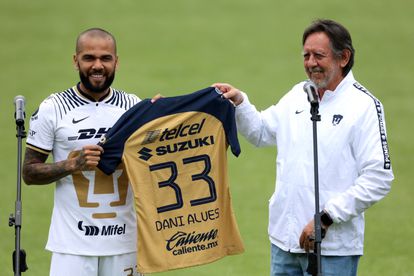 Dani Alves with the president of Pumas, Leopoldo SIlva, this Saturday in his presentation at the Pumas facilities. LUIS CORTES (REUTERS)

From the most Martian rumor to having Dani Alves on the pitch at Ciudad Universitaria. The Pumas have presented this Saturday the most important signing in their history in a day of revelry. The 39-year-old Brazilian made an unlikely choice for a team used to producing players rather than buying them.

“Thank you very much to the president [de Pumas, Leopoldo Silva] for bringing me to this place. I am a person who goes beyond football, I am a person who likes to leave a legacy to younger people”, said Alves, dressed in his university uniform. “Come on, Pumas!” He launched in a presentation where he was escorted by young soccer players from the representative club of the National Autonomous University of Mexico, the largest in Latin America.

Dani Alves’s first gesture in Mexico was to put on the mask of El Santo, the Mexican wrestling legend. The country welcomed him with a stampede of fans looking for a selfie, or something similar at the Mexico City airport. Alves’s first dribbling did not occur on the pitch, but on the polished floor of terminal one, where he outwitted all the fans and exited through an alternate door. His private driver took him for a ride around the outside of the Estadio Olímpico Universitario and the relief mural by artist Diego Rivera that adorns the Pumas field.

Less than 24 hours after arriving in Mexico, Dani Alves showed up at his new club’s facilities at 9:00 a.m. on a Saturday. More than one of the sports journalists was caught in the middle of a hangover. Alves, seen by the Mexican club’s employees as the best signing in his history, signed his contract and held his first practice with his new teammates. The Brazilian’s magnetic smile never wavered under the intense heat of Mexico City at noon. The club’s employees agreed on one thing: the Brazilian’s friendliness. 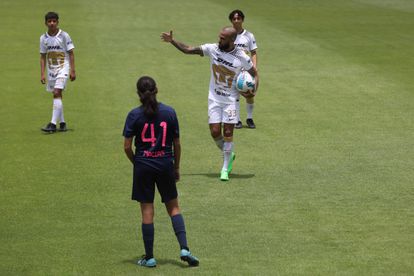 I come from a small town [Juazeiro, en el Estado de Bahía] where many people come out wanting to win. Soccer has transformed my life. I have accepted the challenge of the university, as I told you in private, because it is the union of society, where we can dream”, commented Alves, owner of number 33.

Alves was sheltered by the Rebel, one of the most dangerous barra bravas in Mexico, with the batucada, trumpets and giant flags. The euphoria of the group of Pumas fans was one of those game days when the club wins the most hated rival by a landslide. “Dani comes to contribute beyond his football with his personality, his experience, his thirst for victory and his desire to succeed. That is transmitted”, commented the president of Pumas, Leopoldo Silva.

The Pumas were able to negotiate with Alves thanks to the fact that the Brazilian was released from Barcelona. The varsity was all over him the whole time until they seduced him in recent weeks.

“It is rare that he came to Pumas, he never brings figures and, besides, he is Brazilian! He is a great player, ”says Mrs. Yolanda Montaño, 57, who sneaked into Alves’s presentation thanks to the fact that her daughter, Mar Moya, plays in the women’s youth team. “We had the rumor before, but we did not believe that a man of his stature would arrive,” she added. Santiago Acosta, a 14-year-old Pumas player, managed to get the Brazilian, even with jet lag in his body, to sign some shin guards for him. “Not all of them were signed, huh,” he said. The soccer player’s presentation lasted five minutes, enough to strengthen Pumas’ hopes of winning again after 11 years without winning a League.

Android malware: Extension of rights by way of OEM certificates from Samsung and Co

Carlos Alcaraz reaches the final of the Hamburg ATP 500