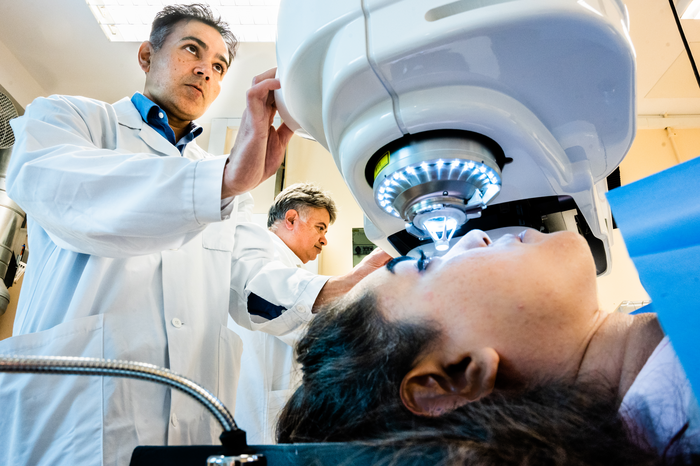 Science has opened a new door to treat corneal blindness, which occurs when the transparent membrane that covers the front of the eye and acts as a lens becomes opaque and prevents light from reaching the back of the eye, preventing vision. Although it can be cured through a transplant, experts estimate that there are 12.7 million people waiting for a donated cornea and these membranes are in short supply: there is one available for every 70 needed. Thus, paying attention, above all, to countries where the donation of human corneas is scarcer due to the limited infrastructure for donation, collection and storage in tissue banks, a group of Swedish researchers have tested, in a pilot study whose Results have been published in the journal Nature Biotechnology, corneas made with pig skin collagen in 20 people with diseased corneas (14 of them were blind). Within two years, all had improved and those who were blind could see. Although more complex clinical trials will be required to validate the measure, the first trial of this bioengineered corneal tissue has shown it to be safe.

Corneal blindness also has a socioeconomic gradient: the incidence is one million new cases a year, but it is concentrated, above all, in low- and middle-income countries in Asia, Africa and the Middle East, the researchers explain. Precisely, where it is most difficult to obtain a donated human cornea due to endless “economic, cultural, technological, political and ethical barriers”. Finding an alternative to the human cornea transplant was key, the authors point out, in order to combat keratoconus, a disease that affects this membrane, weakening and thinning it, and which is the cause of most transplants.

To find an alternative to the donated human cornea, the researchers bioengineered collagen, the main protein in the human cornea, as the raw material. “For an abundant, yet sustainable and cost-effective supply of collagen, we use medical-grade collagen sourced from porcine skin, a purified by-product of the food industry that is already used in FDA-approved medical devices. [la agencia reguladora estadounidense] for glaucoma surgery and as a wound dressing”, they explain in their article. Unlike donated corneas, which must be used in less than two weeks, bioengineered corneas can be stored for two years, which also makes storage and implantation easier.

The researchers also used a much less invasive implant technique than usual, which requires surgical sutures and can only be done in large hospitals. “A less invasive method could be used in more hospitals, thus helping more people. With our method, the surgeon does not need to remove the patient’s own tissue. Instead, a small incision is made, through which the implant is inserted into the existing cornea,” Neil Lagali, professor at the Department of Biomedical and Clinical Sciences at that institution, and study author.

During the two years of follow-up of the patients – all citizens of Iran or India and the majority blind before receiving the implant – no adverse effects or complications were observed. The results, the researchers point out, are similar to those of a human cornea transplant and an improvement in visual acuity can be seen: the tissue healed quickly and, according to the authors, it was only necessary, according to the authors, eight weeks of immunosuppressive eye drops to prevent rejection of the implant. Of the 14 participants who were totally blind before the study, all partially or fully regained their sight after the transplant.

Safety and efficacy have been “at the core of the work,” Mehrdad Rafat, CEO of LinkoCare Life Sciences AB, which manufactures the bioengineered corneas used in the study, added in the same statement: “We have made significant efforts to ensure that our invention is widely available and affordable for everyone and not just the rich. That is why this technology can be used in all parts of the world”

Before reaching the market, this therapeutic option will have to go through more tests to validate its effectiveness. “The results show that it is possible to develop a biomaterial that meets all the criteria to be used as human implants, that can be mass-produced and stored for up to two years and thus reach more people with vision problems. This helps us overcome the problem of the shortage of donated corneal tissue and access to other treatments for eye diseases”, Lagali specifies.

The research published in Nature Biotechnology sheds light to combat inequalities in access to corneal transplantation, but it is not the first time that attempts have been made to find alternatives to donated human corneas: more than a decade ago, for example, Spanish researchers joined to the race in search of artificial corneas from stem cells of the cornea extracted from a deceased donor to alleviate visual problems. The fight against blindness, however, is played today on another level: that of optogenetics, gene therapy with photosensitive proteins that is already being tested in humans and has managed to partially restore a person’s sight after 40 years of blindness. Research into the use of stem cells to combat vision loss is also ongoing and preliminary studies have already shown that grafting these cells into the retina does not cause rejection and allows incurable damage to be reversed.

Disney + takes the lead on Netflix: it will launch its version with advertising in December