Cooked potato: how such a simple ingredient became the star of the summer

The potato is, like rice or pasta, a blank canvas that allows you to deposit on it from the most baroque to the most austere combinations, which can shine as much or more than the previous ones if they are well chosen and combined. The summer potato salads are a good example of this: from the Spartan aliñás potatoes —a minimalist delicacy par excellence from Cadiz— to Russian salads where lust reigns much more than fantasy, according to the members of the Observatory of this preparation, which leaves the orthodox of Valencian paella at the level of simple fans.

As happens with so many other humble preparations, the origin of papas aliñás is uncertain: simple food helps history to be generated by feeding the people, but it is rarely reflected in it. Someone was hungry, they had potatoes, they had onions and something to dress it with, and magic arose out of necessity.

For this, someone had to domesticate potatoes as a crop, something that happened in the Andean highlands in the fifteenth century BC, although the first to consume them “were the Navajo peoples and their ancestors, settled in the southwest of the current United States. , which, even in the middle of the last century, collected the small tubers of two wild species of potato (S. jamesii and S fendleri) that they consumed roasted or cooked”, points out the study Plant history I: the history of the potato of the University of Extremadura.

To honor the tuber by eating a good portion, from the Cadiz gastronomic portal Cosas de comé, Pepe Monforte —who defines himself as an “expert in Tapatology and a Master’s degree in Salad Salad with a sticky sauce, Cadiz and Sevillian”, so if there is a qualified voice to speak of the subject is him—, begins by recommending “the mother of all potatoes with dressing: those from Barbiana de Sanlúcar. They are served lukewarm and with a large piece of melva in oil on top, followed by those from Bar Terraza, Venta Gabriel and Barbiana. Monforte points out that good potatoes are also served in Seville, and he highlights those from La Bodeguita Romero in Seville and the San Rafael de Camas winery.

Monforte recommends at this point “a historical version of this dish, since it began to be served at the Venta de Vargas in 1924” that departs a little from the most classic formula of this dish, since it includes tomato. “However, they are exquisite, with a very good point of dressing and juicy,” he says of these almost century-old potatoes, along with those he also recommends others illustrated with cuttlefish from the El Colorao bar or the most sophisticated ones —in templaíto, with egg low temperature and loin shavings—from El Laúl.

If, following the tomato trail, we add other vegetables such as red and green peppers to this extended basic, we will obtain a country, Spanish or summer salad; a kind of richer Pokémon evolution. It is not a closed recipe with which we can become fundamentalists: each garden and each house put, and puts, what it had and has. Although it is tasty, simple and nutritious, it has two ingredients that, raw, can repeat more than the chorus of a summer song: pepper and onion. You can reduce the effect by seasoning both ingredients in the fridge a while before; the vinegar will cook them slightly thanks to the effect of the acid. If you stay up late this August, let it be to dance at the town festivals and not because dinner is sponsoring you a Toledo night.

With the Russian we have run into 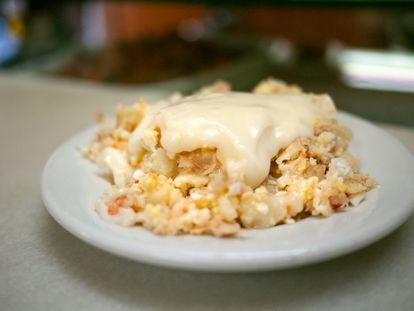 The Russian salad, one of the star dishes of the summer and an institution in Spanish gastronomyPhoto by Rafa Elias (Getty Images)

A sauce that envelops everything, provides creaminess and makes the flavors amalgamate? It was a matter of time before the potato salad and the mayonnaise coincided: this is how the Russian salad arrived. Although its creation is attributed to the Belgian chef Lucien Olivier in 1860 —a very sui generis attribution, since the ingredients included lobster, partridges, crabs, olives and more, in a kind of cornucopia of salad bowl—, our colleague and wise gastronome tells Jose Carlos Capel that “salad is mentioned for the first time in Spain in the book La Cocina Moderna (M. Garciarena and M. Muñoz, Madrid 1857), probably the most important manual of Spanish cuisine of the 19th century”; three years before Olivier opened his restaurant.

It took 35 years to find the next reference, this time in Ángel Muro’s General Kitchen Dictionary (1892), in a much simpler format based on vegetables and as a courtesy tapa in bars and taverns, where the thing I wasn’t up for salmon. According to Antonio Casado and Pepelu Moreno and Javi Padilla, the founders of the Russian Salad Observatory (ODER), currently their ideal recipe includes potatoes and carrots, hard-boiled eggs, tuna or melva, bell pepper, mayonnaise and optionally peas. From ODER they recommend trying those of the Sevillian Mariscos Emilio; Becerrita restaurant and Donald seafood restaurant, their podium without discussion and in this same order.

Putting pickles -although the Murcian version has-, pink sauce or aioli, anchovies, Modena chorretón, parsley or crab sticks is reason for cessation. The same as serving it in a can, slate or churrigueresquely decorated with a mayonnaise dispenser, nor rounding it like an ice cream; you have to serve it in a goop or, as Moreno says, “with contempt”. It has become clear: the Russian salad is not a cupcake, and if someone treats it as such from ODER they will not hesitate to send their Special Security Operations Group GOES, whose purpose is to defend the delicacy at all costs (and incidentally ensure the chufla on social networks, you just have to look at the hashtag #nobolasensaladilla to see how they spend it).

If you go from orthodoxy

All this seems very good to you, but you are an adventurous spirit and you have come here looking for mambo, we also have salads for you. In Seville itself, Mikel López Iturriaga recommends La casa del tigre, with hake, chili pepper and fried capers; Cañabota with chopped parsley; and Lola Taberna’s, with fried egg and shrimp. In Malaga they have compiled prizes in Madrid fusion in recent years for Tragatá —with piparra—, Candado Golf’s templaíta that is served at room temperature and Chinchín Puerto, with endemic prawns from the area called coloraíllos. Out of competition but winners in many stomachs, those of La Cosmopolita, Refrectorium or El Estrecho do not allow discussion in Malaga either. Long live potato salad in all its versions!

Ingredients (for about 6 people)

Boil the potatoes in plenty of salted water —starting with cold water— for about 25 minutes (a little less if they are small, a little more if they are large). Turn off the heat and leave them for 15 more minutes. Drain in a colander and wait until they can be peeled without burning. Meanwhile, cut the onion into strips. Peel the potatoes when they are still a little hot —it will help them absorb the flavours— and cut them into about six pieces. Transfer to a bowl and dress with oil, salt and if you want vinegar. Add the onion and parsley, mix and cover. When they are at room temperature, serve; if you want with any of the optional ingredients.