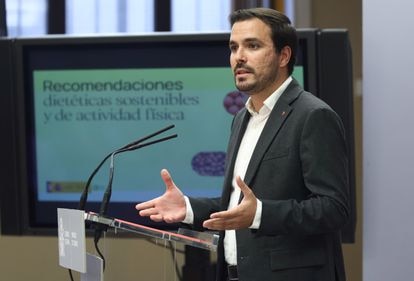 The Minister of Consumption, Alberto Garzón, intervenes in the presentation of the report. Eduardo Parra (Europa Press)

The Spanish Association for Food Safety and Nutrition (AESAN) recommends reducing meat consumption to a maximum of three times a week, preferably chicken or rabbit, and performing between 150 and 300 minutes of physical activity, in the same period. These are some of the guidelines contained in the Report on sustainable dietary recommendations and physical activity recommendations for the Spanish population presented by its Scientific Committee at the Ministry of Consumer Affairs and which was attended by its owner, Alberto Garzón. This document updates the guidelines contained in the one published in 2019, when the suggested servings of meat were between two and four per week. It is the first time that environmental impact and physical activity have been taken into account to carry it out, as highlighted during the presentation. These recommendations come a year after President Pedro Sánchez disavowed Minister Garzón precisely for proposing that less meat be eaten.

The AESAN advises prioritizing fresh foods over ultra-processed foods and prioritizing proteins of plant origin over those of animal origin, since they are beneficial for health and reduce environmental damage, as the coordinator of the report, Esther López, has assured. Legumes are the food group that contains the most and the amount of suggested intake has increased. In 2019, the body suggested consuming two to four servings per week and now it has increased to a minimum of four per week, which ideally should be increased to one per day.

Fish should be consumed at least three times a week —two were previously recommended— and it is advisable to prioritize blue fish (such as salmon, kingfish or tuna) over white fish (cod, hake or sea bream). The healthy intake of eggs is four a week, and its consumption is considered highly recommended in stages such as “pregnancy, lactation or anorexia associated with aging”, specifies the report, due to its high nutritional content and its ease of consumption. .

As for milk and dairy products, the suggested amount has also been reduced. Three years ago, between two and four daily servings were recommended. Now, the public body invites you to consume a maximum of three, without added sugars and with a low salt content. This amount should be reduced if other foods of animal origin are consumed. The guideline on fruits and vegetables is to eat at least five servings a day. They can be combined, for example, take three servings of vegetables and two of fruit. From AESAN they emphasize that consuming fruit juices should not replace whole fruits, since the former contain a greater amount of free sugars, those present naturally, and they recommend consuming the lowest amount possible.

Nuts should be consumed a minimum of two or three times a week and increase that amount to a daily serving. They should always be eaten without added salt, fat or sugar and the established amount is between 20 and 30 grams. The agency recommends eating two to six weekly servings of cereal.

The recommended physical activity per week for adults and older adults is between 150 and 300 minutes, if it is a moderate aerobic exercise, such as walking at a good pace without being difficult to speak, riding a bike calmly and on the flat or soft dance. If the exercise is more vigorous, such as swimming, running, fast and hill biking, 75 to 150 minutes would be worth it. Children and adolescents are recommended to do a minimum of one hour a day of moderate sports and three days a week of vigorous exercise.

Those over 65 should do activities focused on balance and coordination to strengthen their muscles, prevent falls, and improve their health. From the AESAN they insist on the importance of avoiding a sedentary lifestyle and ultra-processed products if you want to maintain a healthy life.