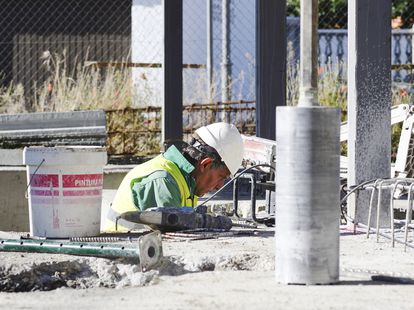 A construction worker works in a building in Valladolid. NACHO GALLEGO (EFE)

Construction was the first sector to wink at the public pension plans designed by Social Security Minister José Luis Escrivá. However, a troubled parliamentary development has put its final implementation at risk. To such an extent that, if during its vote in the plenary session of Congress on Thursday, the episodes of lack of coordination that occurred in the Labor and Social Security Commission last week are repeated, this pension support formula could disappear from the new collective agreement, according to industry sources. “The more interventionist the bill is, the more all this is in danger,” acknowledge these same sources.

On May 11, the National Confederation of Construction (CNC) and the UGT and CC OO unions reached a preliminary agreement for the signing of the VII General Collective Agreement of the Construction Sector (CGSC), a very labor-intensive branch, where 328,527 companies coexist, and which represents 5.2% of the country’s Gross Domestic Product (GDP). One of the main points contemplated by this new framework is the promotion of a sectoral pension plan “provided that the incentives committed by the Government are included in its regulation”.

These refer to the possibility that companies deduct up to 10,500 euros from the tax base (in individual companies the maximum amount is 1,500 euros), or that contributions to pension plans do not contribute to Social Security (with a limit of 115 euros per month per worker or 1,380 euros per year), which represents a saving of almost 400 euros per worker. This may also contribute more than what the company does with a limit established based on the business contribution.

Similarly, the bill establishes an improvement in the personal income tax deduction for the self-employed, who will be entitled to a deduction of 5,750 euros per year, more than triple what is currently in force. “The pension plan is conditional on the approval of the negotiating commission for the collective agreement, and what this commission wants is for the bill to remain reasonably the same as it is now,” say sources in the sector.

However, during the vote in the Commission last week, different modifications were approved, some of them by mistake, as is the case of the maximum Social Security contributions (a measure that would mean that each company and worker would have to pay full salary). A change proposed by United We Can and that went ahead after the PSOE inadvertently voted favorably, and that forces it to have to present a private vote in the Plenary of Congress to correct this circumstance. Sources from the Ministry of Social Security are confident that they will be able to reverse this approval, for which, however, the Government will have to once again seek the support of the rest of the parties.

Along with the 10% discount on corporate tax for the companies that receive them and the elimination of the veto on the Administration in the investments of pension plan funds, another of the points approved at the last minute was the rise in 15% of non-contributory pensions. An EH Bildu proposal that the Government accepted, the impact of which will affect 440,000 pensioners (their allocation will rise between 60 and 100 euros), and which will mean an extra cost for the State of 330 million euros.

None of these last five alterations pose a problem for the construction sector, but their fear is that new proposals may be presented in this Thursday’s vote that end up changing the composition of the plans. “What happened last week was chaos, and we don’t want something like this to happen again. If the conditions that are defined right now are altered and we back down, it will be a tremendous stick. We have not even been able to access the commission’s report to see what ended up being voted on”, warn sources in the sector.

The opinion ended up going ahead with 19 votes in favor, 12 against and six abstentions. On the yes side, in addition to the PSOE, United We Can, the PRC and the PNV. Bildu and Vox abstained, while Partido Popular, Esquerra Republicana, Compromís and Ciudadanos voted against. If the plenary session of Congress approves this Thursday the project of Regulation Law for the Promotion of Employment Pension Plans, the text will be sent to the Senate.

More than 200,000 people will be able to benefit from the legalization of medicinal cannabis in Spain