Conservative funds end the worst semester in their history, falling 4% 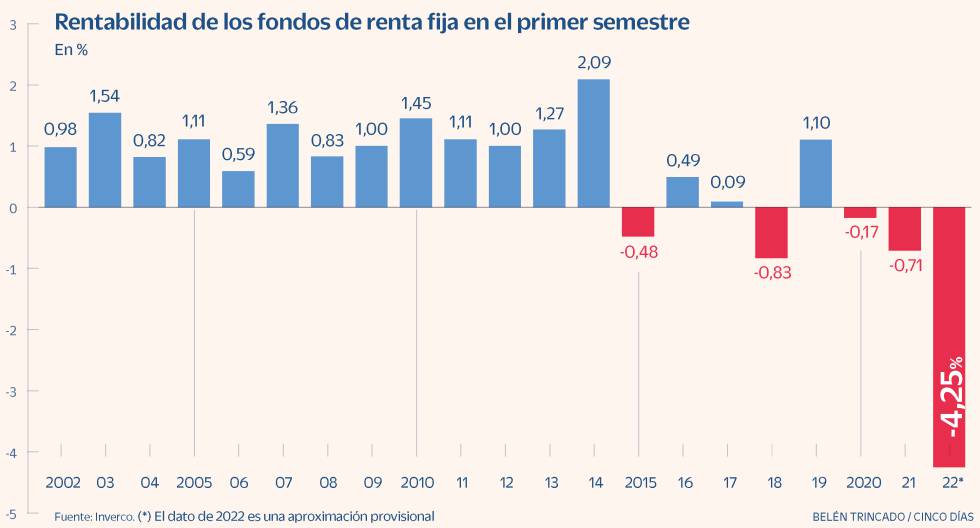 Dark semester, almost black, for the most conservative investors. Investment funds specializing in debt, considered the safest, have closed the period from January to June with accumulated losses of 4.25%, the worst since there are records. A setback for many individuals who thought that fixed income could never fall.

The data comes from Inverco, the association of fund managers, and corresponds to the investment funds of Spanish managers. The drop data is an estimate, because there are still some firms that are finishing reporting, but the final one will barely vary a few tenths.

“It has been the worst month for fixed income funds since we have records. There is no doubt about that, ”recognize sources from the association.

In Spain there were at the end of June €83 billion in funds dedicated to investing in corporate and sovereign debt. The loss of value of the money accumulated in these vehicles during the first semester far exceeds 3,000 million euros.

Germany. For decades, the bonds issued by the German government have been a guarantee of stability. In fact, in recent years they offered negative returns: you had to pay to lend money to the German country. However, the change in tone of the ECB’s monetary policy has led to an unprecedented correction in the price of the bund. In just six months the 10-year German bond has lost 13% of its value.
Eurozone. The value of all European sovereign debt has fallen sharply in these first months of the year. According to an index that monitors this type of assets (weighted by the size of the issuer), the average falls in the semester have been 13%.
EE UU. The bond issued by the United States Government has registered its worst first half since 1788, according to data from Deutsche Bank. In this period it has devalued 11%. In parallel, the debt issued by the most solvent companies in the country has depreciated by 14%.

Enrique Pérez Pla, CEO of Bestinver, acknowledges that these days it is time to do a lot of pedagogy with customers. “It has been a very difficult few months. But we are already seeing that prices have stabilized.” The reference fund of this debt manager, Bestinver Renta, has lost 12% so far this year. And that its team of fixed income managers is one of the most successful on the Spanish scene.

Bish Limbu, head of multi-management at the firm Mediolanum International Funds Limited (MIFL), explains that the most difficult thing in these months “is that there has been no refuge in any assetbecause there have been crashes everywhere.”

Indeed, in addition to the falls in sovereign bonds, in corporate debt… the stock markets around the world have also registered strong corrections.

This has made the evolution of mixed fixed income funds (which usually have up to 30% investment in the Stock Market) has been even worse than that of fixed income. Between January and June, this category has lost 7.8% of its value.

The Spanish fund investor has a more conservative risk profile than that of other countries. For this reason, the best-selling funds are dedicated above all to investing in debt, and have registered significant falls in 2022. This is the case of the fund of BBVA Quality Conservative Investment, with assets of almost 8,000 million euros, and which has lost 3.9% in the year. In the last 10 years, the owners of the fund have lost an average of 0.25% per month.

Another of the largest conservative funds is the CaixaBank I’m So Cautious (from Bankia), which has registered a collapse of 8.5% in 2022.

The explanation for the falls in the price of bonds lies in inflation. After many years of expansionary monetary policy, prices have soared, both in the United States and in Europe. Central banks have started to withdraw their large debt purchase programs, which means that sovereign bonds are now less attractive to investors, which has plunged their value.

Survivors 2022: Who was the contestant saved yesterday?