Chess is now one of the most popular sports in India thanks to five-time world champion Viswanathan Anand, as famous in this country of 1.4 billion people as Rafa Nadal is in Spain. This explains why its 5th most populous city, Chennai (11 million), has set up in just four months what was planned in Moscow: an Olympiad and a Congress of the International Federation (FIDE) that will bring together nearly 3,000 people from almost 200 nations until August 9. The absences of the sanctioned Russia and the restricted (due to covid) China give Spain a chance of a medal.

“I can not believe it. Just four days ago, when I arrived, several of these pavilions did not exist”, several members of the organization commented separately to EL PAÍS. Minutes later, at the opening press conference, the director of the Olympiad, Bharat Sing, explained: Apart from the commitment and sacrifice of many people, the Government of the state of Tamil Nadu has overturned. The initial budget was ten million dollars, but surely we are going to spend much more”.

And what you see indicates that he is not exaggerating. Thousands of posters – some huge – advertise the 44th Chess Olympiad throughout Chennai (formerly Madras), in complete contrast to the lack of advertising a month ago on the streets of Madrid during the Candidates Tournament. Anand, idolized throughout the country, will not play with the national team (seeded 2nd) despite the fact that he is one of the longest-lived elite chess players in history: 12th in the world at 52 years old. And he has a compelling reason: he is number two in the team that the president of FIDE, the Russian Arkady Dvorkovich, presents for his re-election, more than likely. Anand made the penultimate relay of the Olympic torch to hand it over to Indian Prime Minister Narendra Modi, who presided over a grand opening ceremony on Thursday.

Thanks to Anand, the great moment of rising popularity that chess is recording in much of the world was unleashed in India three decades ago. Not a few mothers and fathers change their profession (or abandon it) and their place of residence to promote their son or daughter’s great talent for mental sports to the maximum. That explains why half a dozen of the predictable chess stars within five years will be Indians. Even India B, seeded 11th out of 188 participants in the absolute Olympiad (150 in the women’s, with Spain 13th), is a very fearsome team for anyone. 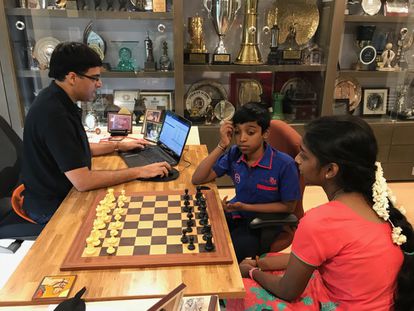 Viswanathan Anand, left, during his 2018 meeting in Chennai with prodigy Rameshbau Praggnanandhaa, then 12, and his sister Vaishali, 17. Ramesh

In theory, the gold is little less than awarded to the United States, whose four starters are among the fifteen best in the world: Fabiano Caruana (of Italian parents), Levón Aronian (born in Armenia), Wesley So (in the Philippines) and Leinier Domínguez (Cuba). And that is missing Hikaru Nakamura (emigrated from Japan at the age of three), who prefers to concentrate on becoming a millionaire as a streamer than being a lion’s tail, even if it means climbing to the top of the podium. World champion Magnus Carlsen, who has just announced that he will not defend his title in April 2023, will lead third-seeded Norway, but did not attend the opening.

Also in theory, Spain (4th in the initial list) presents the best team in history. But with several reasonable doubts. Paco Vallejo (39 years old) has just returned to competition after being almost inactive during the pandemic. Alexei Shirov (50) is another impressive case of sporting longevity, but with irregular performance. David Antón (27), has shown poor form in his last tournaments. Eduardo Iturrizaga (32) divides his energies between chess and his recent fatherhood. Only the emerging Jaime Santos (26) seems at the right time to perform at his best.

Chess is not yet ready to eliminate women’s competitions: there is only one woman among the top one hundred in the world, and only one for every ten men plays. However, this Olympiad will break another significant mark (in addition to the number of participants): thirteen women in the 188 teams registered for the absolute Olympiad, something never seen before the explosion produced by the series Queen’s Gambit (Netflix). All the information compiled during the last year in various countries reveals that the increase in the number of practitioners is noticeable above all among girls.

It was in the territory of present-day India where the oldest archaeological remains of chess are dated (around the 6th century), which indicates that its history is even older. Curiously, in Al Andalus, where the Arabs brought it at the end of the 8th century, many women played, as can be seen in the illustrations of the chess book written by Alfonso X, El Sabio, in 1283. But for centuries, chess has had a masculinity label in most of the world, although the Queen’s Gambit has alleviated the problem somewhat. India is the top seed in the women’s competition. Hungarian Judit Polgar, the only woman in history to have been in the top ten in the world, now a commentator for Chess24, said in a morning press conference: “From what I have seen in the four days I have been here, this It’s going to be a memorable Olympics.”

Subscribe to the weekly newsletter ‘Wonderful play’, by Leontxo García