Carlos Gómez, CEO of Iberia Express: “The only red line against USO is what puts the company at risk” 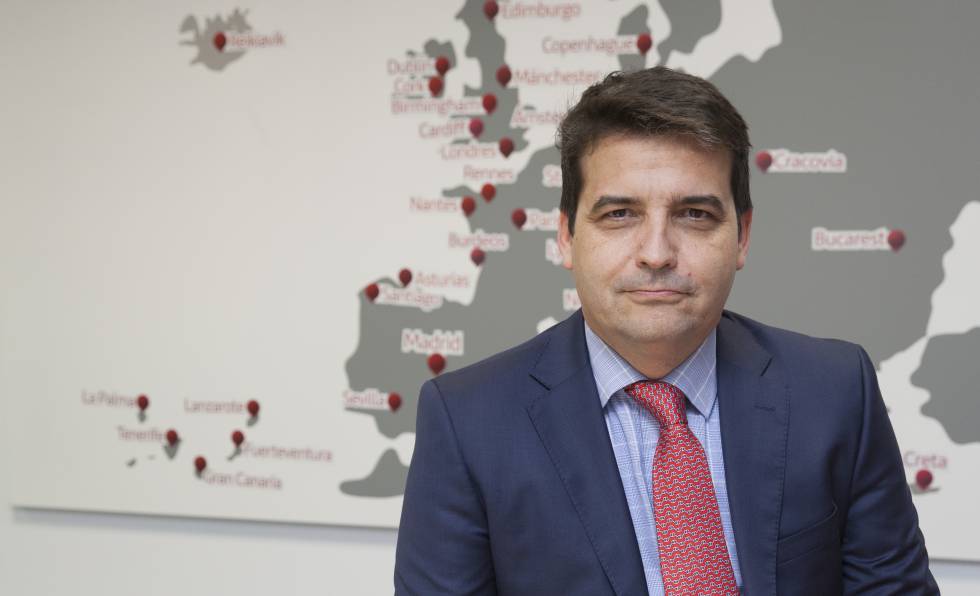 At low cost of Iberia faces a cabin crew strike (TCP) that breaks a long period of social peace in the group. Iberia Express adds to the conflicts in Ryanair o Easyjetand here it is also USO that calls 517 workers to strike between August 28 and September 6 in defense of their positions on the second agreement. Some 1,200 flights are planned for those ten days. The leading direction Carlos Gomez It has been understood with CC OO and calls the entire staff to responsibility. He rejects pressure and assures that there are no red lines in the negotiations “as long as the efficiency that allows us to compete, with our 23 aircraft, with the largest in the sector, is preserved.”

How close or far were they from the USO petitions in the mediation that closed on Friday without success?

We made an offer for them to join the agreement that they have signed CC YES. It is a good proposal and an important step to continue with the negotiation of the TCP agreement, which we would like to have closed before the end of the year. But the demands that come to us from USO cannot be negotiated under the threat of a strike. We are open to evaluating any type of reasonable proposal, but at the negotiating table.

Did the transitory solution signed by the CC OO to mitigate the effect of inflation already offer a salary increase?

We have spoken with the unions about 5.1%, but we would like to deal with a whole package within the framework of the agreement. In the ten years of the company’s life, we have reached many agreements with union sections and we always believe in good faith. But, in this case, we are clear that there has been a deliberate intention to go on strike. The call presented to us on the 16th is accompanied by documents that make constant reference to the 10th. I assure you that this company is open to dialogue and that, in those days, as we approached the USO positions, they increased.

The union section affirms that its battery of requests add up to a wage increase of 16%, compared to the 26% estimated by the company. Why those ten points of difference?

We have not had details of the calculation of that 16% or any formal proposal, but we have estimated a 26% increase in wage costs with the strike call in hand. In any case, a request of 16% in the current context is unreasonable and much more under threat of strike.

“Iberia Express cannot negotiate with USO under threat of strike”

You are the CEO, but you also drive and know many of the workers and their situations. USO complains of a seven-year pay freeze for TCPs. Can you tell me about the treatment given to this group?

It is not fair to say that there has been seven years of freezing but an agreement in force. With all the rigor I explain that this agreement has a series of salary slippages over the years. All cabin crew are moving up in levels and the average salary increase has been 20%. But now we are talking about a new agreement and a review to make our staff comfortable. This is their home, they must have good salaries commensurate with our business segment, and you have to reach an understanding yes or yes.

How far are you willing to go, broadly speaking, with this new labor framework?

I insist that we are open to everything if it is reasonable and from the point of view of a complete package. There is no red line as long as the future of Iberia Express is not put at risk, as is the case with USO requests. It is key that we maintain the attributes of the company. I believe in measures linked to results and we need flexibility in the face of possible further deterioration in the business context. It is clear that this agreement must be valid for both parties, and this has been understood by CC OO, which is one of the main unions in Spanish aviation.

“On the flights affected by the strike we will offer all kinds of flexibility measures and facilities to customers, including refunds”

Are you affected by the battle between USO and CC OO at Ryanair?

I wouldn’t go so far as to say that, but I do see a deliberate strategy of confrontation on the part of USO. I always say that it is important to seek points of agreement and understand the position of the other, but they want to impose some measures on us and if not, they will strike.

How many operations are planned between August 28 and September 6, the days affected by the call?

About 1,200 flights. We believe that the impact will not be very important because a union with a large number of members has supported the agreement, there are the minimum services and I have great confidence in the responsibility of the people of Iberia Express. They know what we are risking and I would like everyone to understand the situation of the company and where we come from. Also, that we are willing to offer improvements.

On Friday they assured that they will enable flexibility measures for travelers who are harmed. Which will be? Will they return the money to whoever asks for it?

“I value the effort of the crews and we must update the agreements, but being able to compete with the heavyweights”

We are going to guarantee the minimum services and try to have the least possible impact on the client. On the flights affected by the strike we will offer all kinds of flexibility measures and facilities, including refunds and re-couplings on other flights. We will inform promptly so that travelers can make their decisions.

IAG CEO, Louis Gallego, held the position that you hold today, and this is one of the few conflicts in the Iberia group for years. What have you transferred from London?

We are in an extremely complex context. In the last two years we have lost about 50 million; We were very much at the limit of the company’s capabilities and our box has ended up exhausted. The crews have made an enormous effort and I am the first to appreciate it. That is why we believe that we must update and improve the agreement. But this airline must continue to be a low cost that competes efficiently with the heavyweights.

Do you see competitiveness at risk?

If we are not faithful to our model and do not watch our costs, we will be putting the future of Iberia Express at risk. But I recognize that without social peace we are also at risk.

Beyond a good summer in terms of demand, do you see uncertainty or are you optimistic?

July and August have been going well, and September is looking good. But we don’t know what will happen beyond November or December. After the Covid, the advance with which the client buys the tickets has been reduced and we do not have visibility.