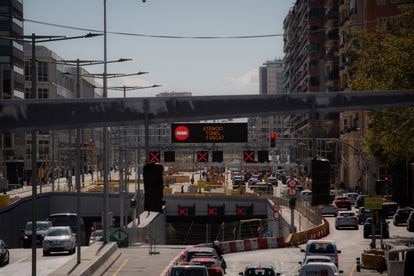 Image of the Glories tunnel, in Barcelona, ​​days before it came into operation in April. Europa Press News (Europa Press via Getty Images)

For two academic years, a group of researchers measured the noise pollution caused by traffic in front of dozens of schools in Barcelona, ​​in their courtyards and inside the classrooms. The results of the work, recently published in PloS Medicine, show that the more decibels, the worse cognitive performance of schoolchildren. The work, which should be repeated in other cities and over time to see the long-term effects, reveals that noise peaks interfere more than sustained average levels.

The research, led by ISGlobal scientists, recorded the noise level, measured in decibels (dB), in 38 schools in Barcelona with sound level meters. They measured noise pollution continuously two school days a week for 12 months of two consecutive courses. In parallel, they carried out a series of cognitive tests at four different times of the period studied to 2,680 schoolchildren between seven and ten years old. The tests sought to measure the performance of two key cognitive aspects: on the one hand, attention, on the other, working memory. The researcher María Foraster, main author of the work, explains both. “The first refers to the time it takes for children to react to a stimulus,” she says. As for the second, which resembles the RAM memory of computers, he exemplifies it: “When we are going to cross a street we receive a lot of information that we have to process, the cars that are coming, that bicycle, the traffic light, the other pedestrians… Once we have crossed, we erase it”.

“This is the first study to assess the impact of noise on children’s cognition, measured both in the classroom and outside of school”

Well, both attention span and working memory are affected by car noise. After the year of study, the progression of both cognitive abilities was slower in male and female students who attended schools with greater noise pollution caused by traffic. For example, a 5 dB increase in outside noise levels above the average resulted in 11.4% slower than average working memory development. Similarly, exposure to an additional 5 dB of outside traffic noise resulted in 4.8% slower development of attention span than average. The interference is greater in the so-called complex working memory, in which more information must be handled. In the tests to measure it, they observed a 23.5% lower than average with that 5 dB increase.

“This is the first study to assess the impact of noise on children’s cognition, measured both in the classroom and outside of school,” Foraster points out. The means of the measurements were 63.6 dB in the school street, 53.5 dB in the courtyard and 38.6 in the classrooms. The latest recommendations of the World Health Organization, from 2018, estimated “traffic noise levels at no more than 53 dB on average during the day”, recalls the researcher. But, being below the limit inside the classrooms, the impact sneaks into them.

The work compared the levels of noise pollution in schools with that recorded in homes. Here they saw no relationship between noise in the place of residence and cognitive development. “This could be because exposure to noise at school is more harmful because it affects vulnerable windows of concentration and learning processes,” says Foraster. It must be taken into account that the levels in the houses were based on estimates inferred from the road traffic noise map of Barcelona and not from records in each home. So it cannot be ruled out that it will also have its impact at home. The kids had to perform four series of cognitive tests to measure the impact of noise on their cognitive development. Barcelona Institute for Global Health (ISGlobal)

Perhaps the most striking result of the work is that noise peaks (the passage of a heavy truck, the horn…) affect more than sustained levels, even if they are high. In the external analysis, both a higher average noise level and a greater fluctuation in the noise levels in front of the school were associated with a worse evolution in the results of the students in all the tests. Inside the classrooms, a greater fluctuation in noise levels also maintained this negative association in all cognitive tests. However, children exposed to higher average noise levels in the classroom only performed worse than students in quieter classrooms on the test of attention span, but not on tests of working memory.

“This result suggests that noise peaks inside the classroom could be more disruptive for neurodevelopment than the average number of decibels. This is important, because it reinforces the hypothesis that noise characteristics may be more influential than its average levels, when current policies [contra la contaminación acústica] they are only based on the average number of decibels”, explains the ISGlobal researcher.

A round of interviews with experts carried out by the specialized service Science Media Center (based in the United Kingdom) shows that those consulted consider the research to be of a high standard and its conclusions robust. Professor of environmental epidemiology at the British University of Leicester Anna Hansell says that “the results are consistent with evidence on the impact of aircraft noise in schools, showing that high levels affect reading comprehension and hyperactivity.” For her part, the professor of cognitive neuroscience at the University of London, Iroise Dumontheil, considers that “this carefully designed study carried out in Barcelona provides convincing evidence of a negative impact of traffic noise on the development of cognition in children. elementary school children”. She and she add: “considering that many European children living in large cities are exposed to high noise levels from road traffic, this study has implications for public policies to reduce noise pollution near schools.”

Jordi Sunyer, ISGlobal researcher and coordinator of the BREATHE project

Jordi Sunyer is a researcher at ISGlobal and coordinator of the BREATHE project. Completed in 2016, BREATHE investigated the impact of air pollution from car emissions on school children. This research with noise pollution is part of the project. “We have not been able to do a detailed analysis of noise until now and what it shows is that, in addition to the effect of air pollution on the neurodevelopment of children, the effect of noise is added independently. The estimates we made then of the impact of traffic were surely underestimated.”

Since the official end of BREATHE there have been two phenomena. On the one hand, studies have been carried out in the Netherlands and the United Kingdom with school children and they have seen that “the effects found in Barcelona were replicable in these samples,” says Sunyer. In addition, as a result of the Barcelona study, authorities in several cities such as London and Paris have launched measures to reduce noise near schools. The lesson to be learned, concludes the scientist, “is that if the administrations are unable to reduce the average levels of noise pollution in the city, they should at least strategically carry out local interventions around schools, as is already done, for example in London”.

"I want to get tired of you"