Can Spain afford to lower taxes? 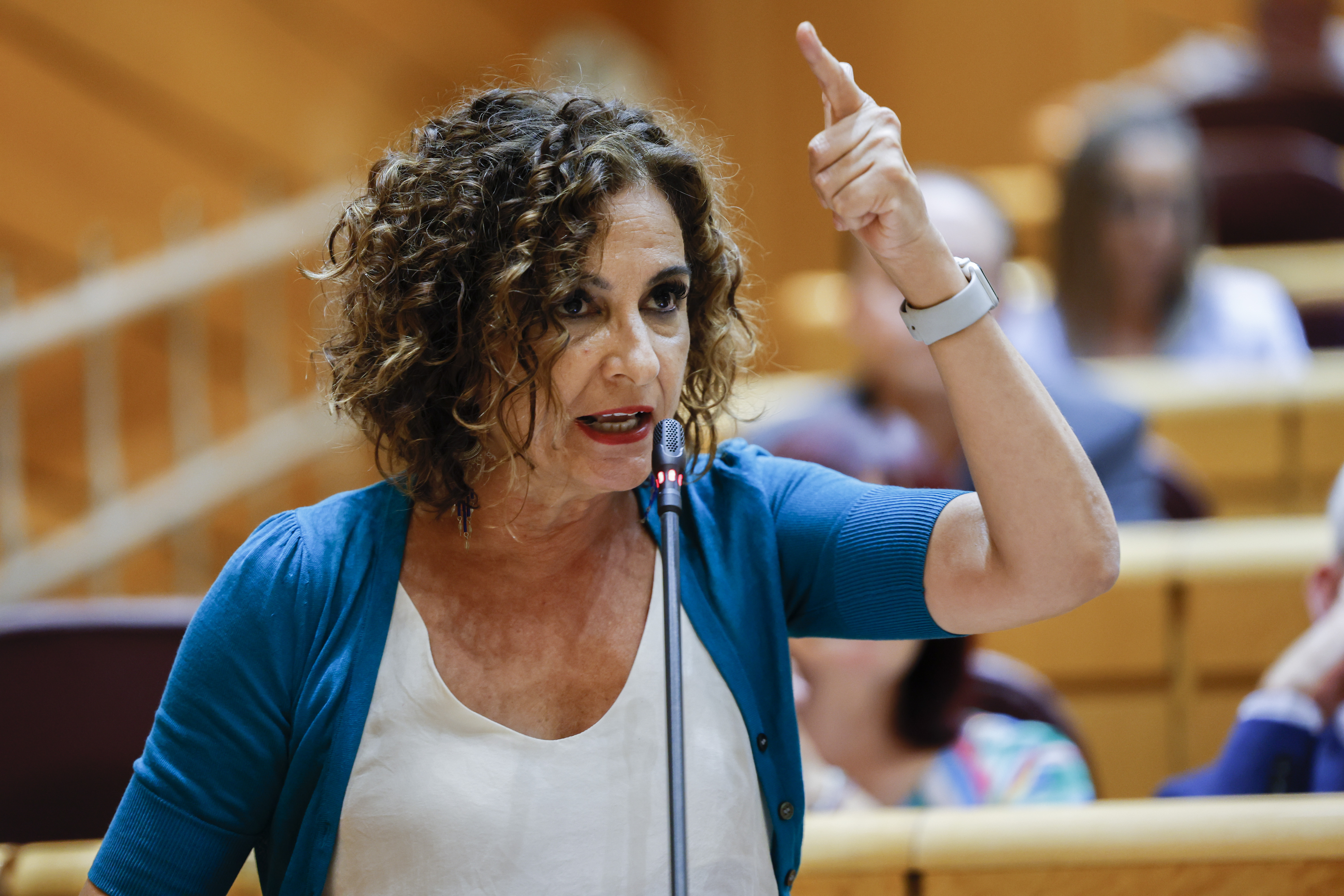 Sometimes the world turns upside down. If the PP of Mariano Rajoy starred in 2012 the largest increase in taxes in democracy; Last week the Socialist Minister of Finance, María Jesús Montero, proclaimed that the Sánchez Executive had carried out “the largest tax reduction that a government has ever made.” The issue of taxes has its substance because it directly affects the pockets of citizens and politicians are aware. All governments, both on the right and on the left, have lowered taxes as they enter an election year. This was the case during the mandates of the socialist Felipe González or the popular José María Aznar. So did José Luis Rodríguez Zapatero in 2008, who even eliminated the wealth tax (although he later recovered it). Rajoy promised tax cuts in 2015, after having raised personal income tax, VAT, special taxes and having toughened companies three years earlier. In the coming months the electoral cycle opens and politicians return to their old ways.

The issue of taxes occupies a leading role in the public debate when Spaniards approach the polls. On this occasion, it has attracted the spotlight as a result of the announcement by the Andalusian president, Juan Manuel Moreno Bonilla, to abolish the wealth tax and deflate personal income tax, following in the wake of the popular barons of launching fiscal winks at the end of the legislature: a strategy concocted from Genoa, headquarters of the PP.

The Sánchez government has come out against this strategy. The First Vice President and Minister of Economic Affairs, Nadia Calviño, has censured the popular: “There are those who are embarking on an absolutely destructive downward race that begins with the elimination of taxes on large fortunes.” Calviño’s words coincide with the decision of the council of ministers of which she is a part to reduce VAT on gas from 21% to 5%. Of course there are big differences between lowering wealth tax for the richest and lowering VAT on gas for all citizens. But behind both decisions lies the same idea: can Spain afford to lower taxes?

The committee of experts for tax reform made it clear: “At the present time, marked by the persistence of the pandemic, the need to guarantee the sustainability of public finances and the coincidence of intense social and economic technological changes, it is necessary to increase the efficiency and collection potential of the tax system”.

To see if a country collects a lot or a little, academics usually refer to the fiscal pressure, which is the relationship between tax revenues and national wealth. In Spain the fiscal pressure is 38%, seven points of GDP below the European average. That is, we should raise almost 70,000 million more a year to catch up with our community partners. Historically, Spain has had a relatively low fiscal pressure because successive governments concluded that they should not raise taxes too much, considering that the country needed to grow faster to recover lost ground with respect to the large European states.

But 40 years of prosperity and the wounds caused by two almost consecutive megacrises have disrupted the context. Spain carries a public debt close to 120% of GDP and needs resources to respond to its creditors and reduce its financial commitments to the levels required by Brussels. The Spanish authorities do not have it easy because they support a deficit of around 5%. In other words, public administrations spend 60,000 million more than they earn.

“In line with what the main international institutions point out, the increase in inequality and the concentration of wealth is one of the greatest challenges of modern economies,” emphasizes the White Paper on Tax Reform. A look at the welfare state does not leave Spain in a good position compared to the rest of its European peers. It does not spend more on education, nor on health, nor does it on social services, they do not even invest more. Nor does it have more public employees than the European average. The inequality index is one of the highest in the EU and is worsening again after the pandemic and the tear that inflation is causing.

The large international institutions recommended that developed countries respond to the covid crisis with public plans to protect families and companies affected by confinement orders. To support this strategy, the European Union approved the recovery fund that allows Spain to have 70,000 million in subsidies and the same in loans.

If there isn’t much room on the spending side, what happens on the revenue side? The great difference in collection in Spain is in the large taxes: personal income tax, VAT and companies, which are practically in the hands of the central State. This explains about three quarters of the tax gap with the rest of Europe. The special regimes of these taxes, with bonuses, exemptions, deductions and other fiscal loopholes reduce the collection capacity by around 50,000 million. They also influence that Spain has a lower proportion of the population working than other EU countries. And finally, the larger size of the underground economy, which especially affects VAT.

The Government of Pedro Sánchez has boasted during the legislature of raising taxes on multinationals and the richest, but it is only collecting 2% more from companies and 0.5% more from those who earn the most. In the opposite direction, it has reduced the VAT on electricity and gas and has frozen the special tax on electricity production to try to alleviate the blow of the energy crisis in homes. This is what led the Finance Minister to say that the Government has staged the largest tax cut in history.

In recent months, inflation, which is making families so poor, is helping to fuel tax revenues. So far this year they have grown at a rate of 18% due to the pull of the economy, but, above all, due to the effect of rising prices. And although the public coffers are full and have more resources than ever, it is only enough to offset public spending to mitigate the bite of inflation, energy prices and the aftermath of covid.

Another issue is the tax policy of the autonomous communities. Patrimonial taxation is concentrated in them, which taxes the transfer and possession of wealth with three taxes: that of patrimony, that of successions and donations, and that of patrimonial transfers. They are state taxes ceded to the autonomies. They are very important taxes, but they collect relatively little, according to experts from the General Council of Economists. “In Spain, as in other countries around us, wealth inequality is greater than income inequality,” the experts recall in the White Paper. “The gap between the extremes of income and wealth has deepened since the years of the financial crisis, so that a relevant and growing proportion of wealth is concentrated especially in the highest part of the distribution.” For this reason, they justify the taxation of assets for reasons of justice, equity and efficiency. “Taxing wealth is also an instrument so that people located in the highest part of the income distribution contribute more to the collection of public income, especially to tax those who can escape personal income tax”, adds the committee of experts.

But in times of electoral campaigns, these taxes are the easiest to lower because they are aimed at very specific groups of the population, the richest, and have less tax collection impact. It is true that there are arguments for the abolition of the wealth tax as Madrid applies and Andalusia has announced. First of all, Spain is one of only three European countries with this tax along with Switzerland and Norway. On the international scene, this tax is in decline, but other countries tax the transmission of wealth more than ownership. There are voices that defend that the tax supposes a double taxation, since the taxpayers have already paid to the treasury when they acquired the goods or when they obtained the income to buy them. “Many communities have requested its harmonization”, slipped yesterday the Minister of Finance in the Senate. Montero stressed that the reform of these regional taxes should be addressed within the framework of the tax reform. Experts also advised to harmonize them.

Santiago Lago, Professor of Economics at the University of Vigo, explains that the race to the bottom of this tax is caused by three factors: for ideological reasons, for the displacement of fiscal domiciles to Madrid, which has the capital effect, but which infects other territories to make policies to prevent the flight of high-net-worth taxpayers and, lastly, because the communities can afford it because they are enjoying the highest level of resources in their history due to the financial protection of the State.

That explains, among other things, the movement that Economists have been warning about for years. The race to the fall of the inheritance and donation tax in all the autonomies, both in those of the PP and in those of the PSOE. All have been legislating in recent years to lower the price of this tax. For all this, the pending tax reform that neither of the last two governments has dared to address should be addressed.

Sabadell will pay a check for 1,000 pounds to the TSB staff for inflation

The bank accumulates a cushion of 66,000 million to lower its tax bill