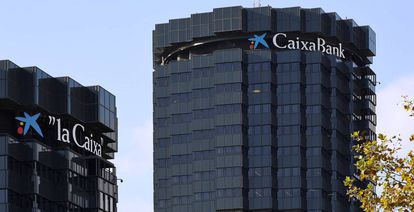 CaixaBank reduced its accounting profit in the first half of the year by 62%, standing at 1,573 million euros. This fall is explained because in 2021 the bank made an accounting contribution of 4,300 million for negative goodwill, also called badwill in its English terms. Now that this point has disappeared, the net result of the entity suffers a sharp drop. As reported to the CNMV, not taking this point into account, profits would have grown by 17.1%.

The entity explains that its results have benefited from the reduction in costs, provisions and strong commercial activity, whose services made it possible to offset the reduction in the interest margin during the second quarter, which shows the evolution of the banking business. That margin fell 3.6% on proforma accounting. [homogénea con el perímetro del año pasado], to stand at 3,156 million euros, due, argues the bank, to the scenario of low interest rates during the first half. Without taking this accounting adaptation into account, that ratio that measures the pure banking business would have grown by 11.6%.

The bank’s CEO, Gonzalo Gortázar, praised CaixaBank’s evolution in the semester, in which he says it has combined “the final phase of the integration process with Bankia with strong growth in our commercial activity”. All banking business segments grew: mortgages, at a rate of 58%, consumer loans, at 21%, and new credit production for companies, at 57%. Recurring banking commissions remained stable and closed with a growth of 1.1%. Likewise, insurance activity grew by 25%.

The evolution of dividends, reduced by 13.5%, to 131 million euros, also played against CaixaBank. The drop is basically due to lower contributions from Telefónica (38 million compared to 51 million in 2021) and BFA (87 million compared to 98). Following the sale of Erste Group, the results of entities valued using the equity method fell by 48.4%.

CaixaBank’s cost reduction has played a role in helping better results emerge. Those of personnel fall 7.5% after the exits of the ERE that was practiced to size the size of the workforce to the objectives of the direction.

The bank maintains 1,257 million euros provisioned to deal with the consequences of the war in Ukraine on the economy. At the moment the balance sheet would not have weakened, defends the entity, and improves “quarter by quarter”. Delinquency stands at 3.2%, the lowest level since 2008 and three basis points below the first quarter results; bad debt funds are 8,126 million and the coverage ratio is 65%. Doubtful balances, 12,424 million, have been reduced by 1,209 million in one year.

The CET1 solvency ratio is 12.4%, lower than at the end of 2021 (13.1%) due to the purchase of shares that the bank has initiated as a shareholder remuneration formula, as contemplated in the strategic plan . At the moment, shares have been acquired at different times for a total amount of 947 million euros, which represents 52% of the planned amount, 1,800 million.