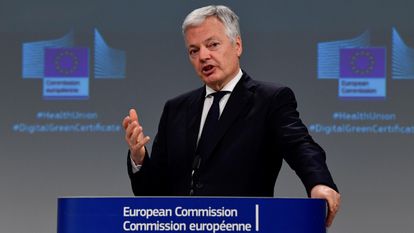 The European Commissioner for Justice, Didier Reynders, who will travel to Spain next week, in a file imageJOHN THYS / POOL (EFE)

The European Commissioner for Justice, Didier Reynders, has offered to mediate in the political dispute between the Government and the Popular Party, which has blocked the renewal of the General Council of the Judiciary (CGPJ) for several years. The senior community official, who will travel to Spain on September 29 and 30, assured this Tuesday that Brussels continues to bet on “dialogue” to unlock the appointment of new members and promote the reform that it asks of the institution. For the moment, he rules out resorting to harsher instruments, such as the sanctioning file that has been opened against Poland, whose judicial situation, he has underlined, is very different from that of Spain.

“The visit will serve to meet with government and opposition officials and see how a dialogue can be opened on this issue to try to achieve reform,” Reynders explained at the end of the General Affairs Council held this Tuesday in the Belgian capital under the Czech presidency of the EU. “It’s about trying to improve the situation, for the moment what we have done is make some recommendations, in July, and try a dialogue between the Spanish authorities, between the majority and the opposition,” he insisted.

The Belgian was referring to the fact that last July, and for the third consecutive year, the European Commission asked Spain to put an urgent end to the blockade in the renewal of the governing body of Spanish judges. “The message was very clear”, Reynders underlined, they are “very specific recommendations, particularly regarding the CGPJ”.

Change in method of choice

In the Spanish chapter of its third report on the rule of law of the EU, the Community Executive described as “worrying” the “delay in the renewal of the CGPJ” and urged Spain to proceed with its renewal “as a matter of priority”, a step that should be followed, “immediately after”, by a process with a view to changing the method of choosing its members “taking into account European standards”. These make it explicit that at least half of its members must be “judges elected by their peers”. In Spain, the 20 members of the body are chosen by the Courts, although the 12 of judicial extraction come from a list of names previously provided by the associations of judges.

Despite the fact that the blockade has continued after the European report, Brussels is not considering for now taking more severe measures as in Poland, which was imposed a fine of one million euros a day almost a year ago for refusing to paralyze activities of the disciplinary chamber of the country’s Supreme Court, a body that for the Commission threatened the independence of judges.

There is “a very strong difference between the situation in Spain and other Member States” because in Spain “it is not a recently passed law to go backwards, to degrade the situation”, he explained. “We are not at all in the case of Poland, because new laws have been implemented there that affect the judicial authority,” she points out.

However, patience has a limit, which is, according to the European Commissioner, a little less than a year: until the publication of the Commission’s new report, reviewing country by country, the quality of democracy, political plurality, judicial independence , respect for minorities and freedom of the press.

“It is clear that we will reassess the situation at the time of the next report to see if the recommendations have been implemented. At that time, perhaps we will consider the possibility of using other instruments if necessary, ”said Reynders. But for the moment, the priority, he insisted, is “the dialogue to try to get the main parties to agree on the nomination of the CGPJ and on a reform project that corresponds to European standards.”

Following Reynders’ proposal, the Minister of Justice, Pilar Llop, has urged the Popular Party to allow the renewal of the General Council of the Judiciary before the European Commissioner visits Spain. “I hope that the PP proceeds to renew the CGPJ and I hope that it does so before Commissioner Reynders arrives because he is going to realize that the PP is breaching the Constitution,” he assured Tuesday night on TVE. “If the PP puts the names of the candidates on the table tomorrow, within a few hours there may be an agreement,” Llop specified. Asked about the pending appointments in the Constitutional Court, the minister pointed out that “the ideal is that the appointment by the government and the Judiciary go hand in hand”, she said, leaving open the possibility that the Executive appoints the two members that correspond to it without waiting for the CGPJ to do the same with its two, informs José M. Abad.

The lawyers of the Congress say that the elections cannot be later than December 10, 2023

How to clean with baking soda

Brothers, preview of today’s chapter: Asiye, despite what happened, refuses to go to the hospital

Congress unanimously condemns the insults to Vinicius at the Atlético stadium