The nationalist left, with eh Bildu heading the banners, will celebrate this October in Saint Sebastian a great festive demonstration to celebrate that ETA’s policy of dispersing prisoners «it is coming to its end»: the vast majority of terrorists have already been brought to the prisons of the Basque Country, and the next stop in the plan is their release. It will be on October 8 and the event will include a series of concerts by musical groups such as Su Ga Tar, whose repertoire includes a song composed by former ETA leader Carmen Guisasola. There will also be children’s performances.

“The way home is near.” That is the motto of the massive event that the pro-ETA circles have been preparing for months, and that changes the face of the traditional protest demonstrations about approaching prisoners. This time, the tone will be festive. Of objective fulfilled, as it was marked Arnaldo Otegi and he has publicly admitted with his phrase «if to get 200 prisoners out we have to vote on the Budgets, we will vote on them». After bringing them closer, this new front is now beginning to take them out into the street. The “mother of all battles” as he defined her, in which the Sánchez Executive is already taking steps as OKDIARIO has revealed.

“Adding vindication and celebration, let’s get together in Donostia to show that the road home is close and that we are willing and willing to continue making the road, the road back home,” say the promoters of the celebration.

The party organized by Sare, the prisoners’ platform that has the support of those of Arnaldo Otegi and that will have direct support from the formation of the act, seeks to “unite all the citizens who have bet for years on the end of the removal policy». A true celebration for what they have managed to wrest from the Government of Pedro Sánchez in recent years, turning the ‘tortilla’ of dispersion upside down and taking a hundred ETA members to Basque prisons.

The party, say its organizers in the call, will take place “at a time when this policy (of dispersion) is coming to an endto thank you for your encouragement and claim that this achievement, which belongs to everyone, becomes a reality». It will start with a demonstrationof great color» which will end with the reading of a statement. There will also be food stalls -“paella, sandwiches…”- and a children’s area. 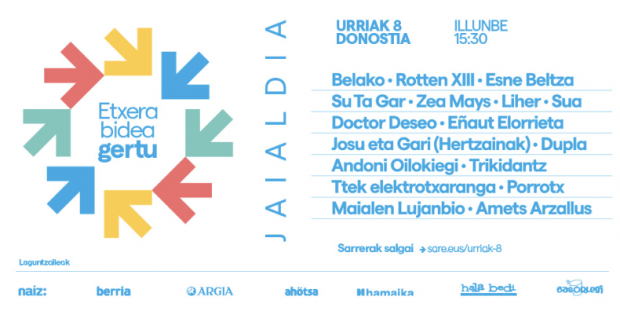 The vast majority of these groups have a high political content in their lyrics. But some in a special way, like Su Ta Garwhose song Eromena was written and composed by the former head of ETA Carmen Guisasola. In 2003 they were denounced by the Association of Victims of Terrorism, which saw acts of humiliation in their lyrics. there will even performances for the little oneslike the clown failurea zip line and a makeup workshop.

On the other hand, Sare and other platforms that are friends of the group of prisoners will launch a fundraising campaign for economic support and “to continue the work in favor of coexistence”. In fact, access to this festive event is through the purchase of a ticket at the price of 25 euros.

They will also put buses with which to get from other provinces to San Sebastian. The same buses that fired the families of ETA prisoners in the summer of 2021: they no longer needed them to travel to see their loved ones in other parts of Spain. They even threw a recognition party for the company that provided the service.