Awareness to change the mentality on the road

In May 1983, Sebas Lorente (Sitges, Barcelona, ​​1962) was returning from a party in the car driven by a friend who had been drinking. He was sleeping in the back seat, unbelted, when he felt a three-second screeching halt, followed by the impact off the road. At that moment he stopped feeling his legs. Today he gives talks to teenagers, in collaboration with the Abertis Foundation, to raise awareness of the importance of Road Safety, whose International Day is celebrated today, June 10.

“People take risks in proportion to probability: ‘I know I’ve had a drink, I know I shouldn’t use my cell phone while driving or I’m tired, but I’m going to be careful and that’s it’. We think that the normal –the probability– is that nothing happens. And so it is… until it happens. Then repentance no longer serves any purpose, ”reflects Lorente.

In his case, the personal choice he made after the accident that left him in a wheelchair was to get ahead, study, work, start a family, become a lecturer and runner-up in Europe in Adapted Golf and raise awareness among new generations with his example . “The change of mentality is achieved, above all, from awareness. Also with punitive measures, which are equally necessary. But the first is essential.

According to a study carried out by Autopistas in 2020 with the aim of detecting the most frequent risk factors in traffic accidents, speeding and the use of mobile phones while driving are directly involved in mortality. If we dial a number on the mobile at 120 kilometers per hour, we blindly cover a distance of 429 meters, which is equivalent to four football fields. The use of instant messaging applications while driving increases the risk of having an accident by 134%.

Although in the last decade the road accident rate in Spain has decreased, in 2021 it still added 1,004 deaths and 3,728 serious injuries, according to data from the General Directorate of Traffic. The toll road network, designed as high capacity and safety roads, has advanced technology for the automatic detection of accidents and the immediate coordinated activation of emergency protocols.

But your goal is to avoid activating them, thanks to responsible driving. It is not only about the possibility of losing one’s life, but about the physical, psychological and economic consequences of the survivors, since insurance does not cover accidents in which alcohol or drugs have been involved.

In recent years, Sebas Lorente has dedicated himself to spreading his optimistic philosophy and life lessons through his blog, his book 8 days rising from #buenhumor (Alienta) and his conferences. “It is true that after an accident uncertainty appears, because you don’t know what is going to happen. Are you going to recover or not? And if you do, how long will it take to recover? You cannot sit still waiting for the outcome. You have a lot to learn and a lot to work on. And that is what depends on you, what you can do”, states the author. 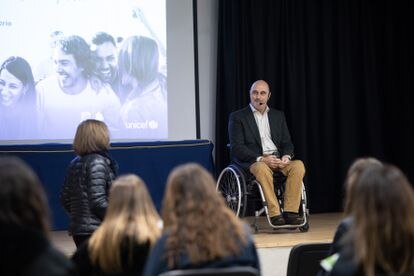 His conference #WeHaveToRepeat, a common phrase after a meeting between friends, has been offered in schools since the 2018-2019 academic year, with 5,000 schoolchildren as an audience -so far-, to whom he transmits his vitality and realism. The impact in the classroom is reflected in the silences. “Young people ask me, both in the sessions and later in the messages they send me, about the boy who was driving the car when I had the accident, about my parents’ reaction, about my own. They are very impressed with the possibility –which they visualize– of causing harm to a friend for having decided to take a risk and also by the economic consequences that they will suffer if they cause harm to someone and the insurance does not cover them for having tested positive”.

Young people ask me about the boy who was driving the car when I had the accident, about my parents’ reaction, about my own. They are very impressed with the possibility of causing harm to a friend

Lorente points out that the new generations of drivers are more aware and know the recommendations on Road Safety, but what they do not know is the day after an accident. “Surely what torments you most is thinking about how easy it would have been to avoid it,” he concludes.

Transplanted for the first time: 3D-printed ears from own cells