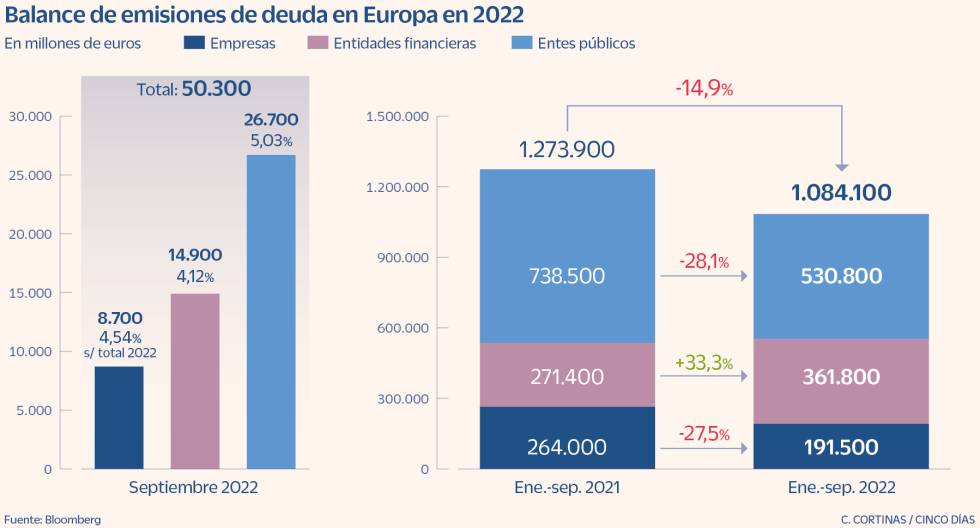 Avalanche of paper in the European market. The traditional market window of the first weeks of September after the summer break has been brought forward. Since the second half of August, companies, financial entities and governments have gone to the primary market to place debt paper in response to the good reception of investors after the turbulence caused by the war in Ukraine and the energy crisis. The narrowing of the spreads, first of all, followed by the confirmation of the rate hike of 75 basis points by the ECB –and the ratification that its pulse will not tremble to curb inflation– and by avid investment funds of paper and with high liquidity in their portfolios, are behind the good reception of investors.

Javier González, head of debt capital market for financial entities at BNP Paribas in Spain and Portugal, assures that “issuers do not expect a perfect situation and choose to leave when the market is good”. In the last three weeks, European issuers have placed paper for nearly 100,000 million euros, according to figures compiled by Bloomberg. Only last week there were placements for 44.3 billion euros, especially from Italian and French issuers, in one of the busiest weeks for placements of the entire year in Europe, the United States and Asia.

Yesterday, BBVA placed 1,250 million euros in preferred senior bonds maturing in 2027. The financial institution took advantage of the good market moment to lower the interest paid from the midswap (risk-free interest rate) plus between 140 and 145 basis points, at midswap plus 115 basis points. The placement, contemplated in its annual issuance plan, will be used to finance increased commercial activity, as well as to preserve the entity’s MREL position.

But the entity chaired by Carlos Torres was not the only entity that sold debt yesterday. Deutsche Bank placed 1,500 million euros, the Belgian firm KBC issued 425 million pounds (490 million euros) and the Italian entities Intesa, Iccrea and Cassa Deposit sold paper for a combined amount of 1,500 million euros, displaying the greatest appetite for investors’ risk and taking advantage of the weeks prior to the holding of early elections in Italy, which will foreseeably increase the volatility of transalpine debt.

“The placement of Abanca last week and those carried out yesterday by Iccrea show that the demand base has been expanded, which until now was more selective. It is no longer just the national leaders who issue in the market”, highlights the expert from BNP Paribas.

So far this month, European financial institutions have issued 14.9 billion euros in debt, an amount that for the year as a whole rises to 361.8 billion euros, 33.3% more than in the same period of 2021, according to data compiled by Bloomberg.

By contrast, corporate issues have fallen by 27.5% so far this year compared to those computed in the same period of 2021. A drop similar to that registered in the issues of public entities, of 28.1%, and that It is justified, as explained in the market, the increase in financing costs due to the rate hike undertaken by the European Central Bank.

Santander. Santander has reactivated the placement of covered bonds as a cheap way of financing after the mega-injections of liquidity from the ECB. The entity has placed mortgage bonds in two tranches, five and ten years, for a combined amount of 3,500 million euros.

Are you a "chocoaddict"?: this is the chocolate shop that you can find in Madrid and Galicia