At least two dead in a mass stabbing in Las Vegas 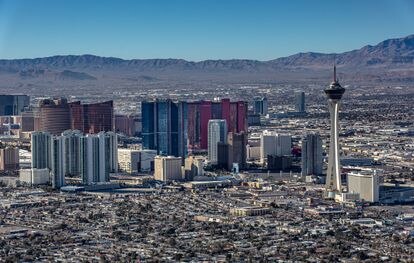 The Las Vegas Strip, seen from the air in January of this year. George Rose (Getty Images)

Las Vegas police have reported this Thursday that two people have died and six others have been injured in a mass stabbing on the boulevard popularly known as the Strip, which connects casinos and hotels in the entertainment capital of the western United States. Joined. The attack occurred minutes after 11:30 a.m. outside the Wynn casino. The suspect has been arrested. Authorities have recovered a kitchen knife from the crime scene as the investigation continues, Sheriff Joe Lombardo said.

James LaRochelle, a deputy chief of police in Las Vegas, has explained to the local press that a man began attacking pedestrians on the Strip without any previous altercation. “As you can imagine, we have dozens of witnesses, whom we are questioning and we also have many videos that we are going to review in the next few hours,” he added to the uniformed man. The suspect, in his 30s and not a resident of the city, was caught on some of these surveillance cameras running as he brandished the knife back and forth. The man, who left a 30-meter trail of injuries, was detained by security guards at the Sands casino.

The incident forced a traffic closure at the intersection of Spring Mountain Avenue and Street. Authorities also asked people to avoid the crowded area. Witnesses to the events told the local Fox channel that at least two of the injured were chorus girls or showgirls, girls who take pictures with tourists and who invite customers to enter the casinos. A video captured by Pierre Fandrich, a tourist from Montreal, Canada, showed a woman dressed in a red feathered costume being carried on a stretcher by lifeguards.

“We first thought it was laughter, but then we realized it was screaming,” another Canadian tourist, Maxime Wallce, told the Las Vegas Review Journal. Witnesses saw one of the chorus girls injured on the ground and another girl helping her. “It seemed that she had also been stabbed in the back of her, but she had not noticed her because she was helping her showgirl friend of hers,” Wallace added to the local newspaper. “There was a lot of blood on the floor,” Fandrich also said.

#BREAKING At approximately 11:42 a.m., the LVMPD received a report of a stabbing with multiple victims in front of a casino in the 3100 block of South Las Vegas Boulevard. At this time, at least six victims have been located. One victim has been declared deceased. pic.twitter.com/WegbwHZRf8

The five victims, both tourists and city dwellers, were taken to the University Medical Center. One of them died minutes after being admitted. Another person is in critical condition and the injuries of two others have been considered “very serious” by doctors.

“This is very tragic and difficult to understand. It is a complex homicide to understand that seriously harms our community, ”LaRochelle said at a press conference in which he offered his condolences to the families of the deceased, whose identities have not been revealed so far. Nevada Governor Steve Sisolak said through social networks that the authorities will work to continue making the Strip, the tourist heart of the city, a “safe and welcoming” place for all visitors.