The statements made this Tuesday in the Parliament by the president of the Balearic Government, Francina Armengol, in the sense that there is no jurisprudence that imposes Castilian as a vehicular language in teaching are false. As published by OKDIARIO, Armengol relies on this false absence of jurisprudence to affirm that it will not take a step back in the imposition of Catalan in the classrooms. The teachers association Plis Education has shown today that Armengol’s argument is false.

Plis points out that to questions from Patricia Guasp, spokesperson for Ciudadanos, Armengol affirmed that there is no jurisprudence that imposes Spanish as a vehicular language in at least 25% of the school hours and in at least one subject or core or similar subject. “Such an assertion is false and shows the lack of legal scruples of nationalists when they decide not to abide by the legal system,” says the teachers’ association.

Plis, in a statement, states the following: «It is impossible for Armengol to ignore the jurisprudence that endorses the 25% minimum, not only because his legal advisers will have let him know, if not, above all, because the Ombudsman communicated to the Minister of Education himself, Martí March, that such jurisprudence exists ”.

Plis explains that on December 16, 2020, the Ombudsman communicated this jurisprudence to the Ministry of Education of the Balearic Islands. This response is included in file 20015519, in which it responds to a complaint filed by the Plis Education association regarding the fact that the Balearic language projects do not include a minimum of 25% of teaching hours in Spanish, as dictated by jurisprudence. 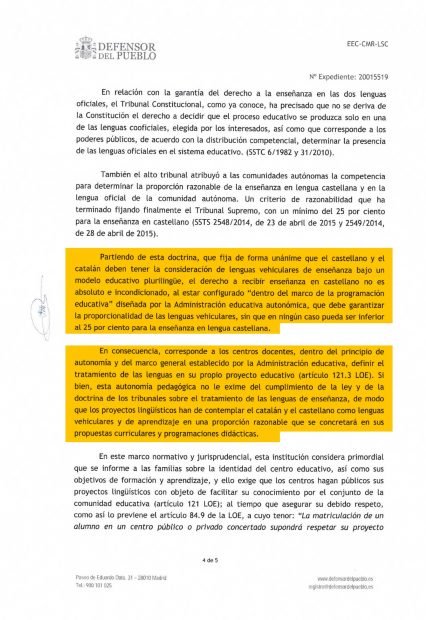 Faced with the statement of the Ministry of Education, which appears in the file, that “we also found no reference to the regulations that supposedly prescribe that 25% of the teaching hours have to be in Spanish”, the Ombudsman says bluntly: “The high court also attributed to the autonomous communities the competence to determine the reasonable proportion of teaching in the Spanish language and in the official language of the autonomous community. A criterion of reasonableness which the Supreme Court has finally established, with a minimum of 25% for teaching in Spanish (SSTS 2548/2014, of April 23, 2015 and 2549/2014, of April 28, 2015).

Based on this doctrine, which unanimously establishes that Spanish and Catalan should be considered vehicular languages ​​of teaching Under a multilingual educational model, the right to receive instruction in Spanish is not absolute and unconditional, as it is configured “within the framework of educational programming” designed by the Autonomous Educational Administration, which must guarantee the proportionality of the vehicular languages, without in no case may it be less than 25% for teaching in the Spanish language ”.

Plis also recalls that on the same date, December 16, 2021, it was issued judgment of the Superior Court of Justice of Catalonia, 5201/2020, December 16, 2020, which was finalized by the Supreme Court in November 2021, where it says, in its legal foundations, the following:

«In the analysis of the individual cases raised so far, the jurisprudence of this same Court and that of the Supreme Court has established that, regardless of whether the model allows flexibility depending on the circumstances, there is a minimum below which it is not possible to understand that the vehicular use of the language reaches the condition of normal within the system, in this sense A minimum vehicular use of 25% of the teaching hours has been set ».

According to the same ruling, the percentage of 25% of teaching hours in Spanish “must fully include non-linguistic subjects.”

The sentences where the jurisprudence of the Supreme Court is established in this regard, were the 2548/2014 and 2549/2014, which in their First Foundation, say the same: “… the minimum presence of Spanish as a vehicular language (in the course and class in which the student continues his studies) in twenty-five percent of the actual teaching hours ”, (…)“ at least another area, subject or non-linguistic curricular subject of a core or similar nature ”.

Drifting in the English Channel