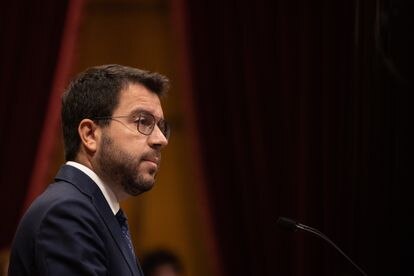 The crisis that increasingly threatens to break up the Catalan Government remains open after the last-minute meeting held this Sunday by the President of the Generalitat, Pere Aragonès, with the Secretary General of Junts per Catalunya, Jordi Turull. Both have tried to explore the margins to redirect the coalition crisis after Junts had set this Sunday as the deadline to try to agree on an exit before consulting their militancy about an eventual exit from the Government. During the weekend Aragonès has already made it clear that he did not accept the measures in the document that Junts sent him last Friday, such as the implementation of a secessionist coordination mechanism, as contained in his legislature pact. The president also does not accept Junts’ request to reinstate Vice President Jordi Puigneró in his Executive, who was dismissed last week.

The environments of both parties confirm the meeting of the two leaders this Sunday, which was done in a discreet manner and avoiding adding more noise at a very complicated moment in the relationship between the partners. It has not transpired that there is any agreement or progress. “At the moment everything remains the same,” say voices from the Palau de la Generalitat. The desire for dialogue, even with the clock against, continues. “Conversations, those that touch”, they insist. The meeting has been fitted between the two acts on the agenda that the two leaders had: Aragonès has participated in the Castells de Tarragona Contest and Turull in a party act, in Solsona (Lleida). From both sides they insist that there is no other appointment scheduled, but it is not ruled out either.

Turull, the day he had announced that he would present the proposal, explained that its content would not be made public to protect the narrow margin of maneuver in the negotiations. Hence, the former Minister of the Presidency verbalized his anger because some details (but not the complete document) had been disclosed to the media. Small clashes in order to clarify the future of the Govern coalition. Technically, if there is an agreement on Junts’ proposal, the idea of ​​Aragonès submitting to a confidence vote would be withdrawn. The fact that this approach was made in parliament, without previously notifying the president, was what cost Puigneró his head.

The meeting between the head of the Government and Laura Borràs’s number two in the ERC partner party also takes place just on the eve of the Junts leadership meeting to finalize the details of the consultation for next Thursday and Friday. Those two days, the militants will vote whether or not to remain in the coalition with the Republicans, as Borràs and Turull themselves explained last Thursday. It is a proposal from the president of the party herself, before the summer, and which ended up being included in the political paper that was approved last July. In an executive that is expected to be long and tense, the format of the question will have to be agreed upon. The decision that it be the militancy that votes technically gives additional margin to be able to avoid the divorce of the partners, but Aragonès himself has already insisted that if a decision does not come soon, he will be the one to make the decisions.