Last night, we experienced one of the most spectacular galas of Survivors 2022 to date. On Tuesday night we live another program of Survivors: Nobody’s Land presented by Carlos Sobera, where Anuar Beno He has suffered a mishap that has ended up worrying his fellow contestants.

No one had a chance to escape. Kiko Matamoros was buried in the sand completely still, Anabel Pantoja ended up falling in a somewhat awkward way, while Anuar Beno he was the worst unemployed, since he had to be treated by the doctors after he suffered a spectacular fall. At first, he took everyone’s breath away, especially his brother Asraf.

The incident happened when Anuar was up on the table where the contestants starred in the salvation ceremony. It was then that Lara Álvarez cut the rope so that the contestant fell into the water, a sign that he was still nominated. However, when falling, the contestant was trapped between the rope and the table, at which point the occasional complaint of pain could be heard.

Asraf breaks down when he sees his brother Anuar badly: “He’s giving me a lot of grief” #TierraDeNadie7 https://t.co/Dbw4CSeXKU

Immediately after the incident, Lara reported that the medical team entered to treat Anuar Beno and assess what happened. After several minutes, the presenter has transmitted tranquility to both her brother and the rest of the set: “It’s perfectly. What has hurt him the most is the lack of support from the public”.

Luckily, the fall has only been a scare, while what worried the contestant most was the fact of continuing to be nominated. A few words that his brother has endorsed: “Not having the support of the public is an important part. Let’s hope it saves Thursday”. She will play her expulsion together with her companions Mariana and Yulen Pereira, while Kiko Matamoros has managed to save himself from expulsion, leaving the list of nominees for the week. 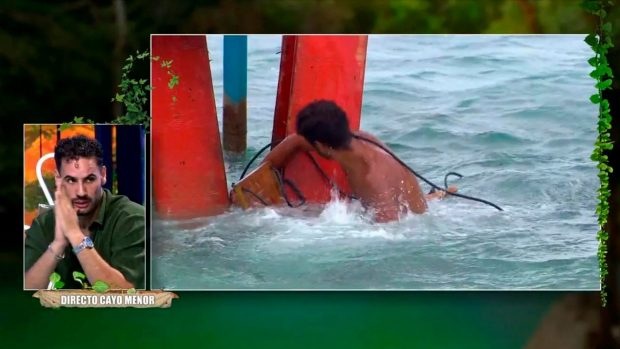 Kahina Bahloul, imam: "I have never worn a veil: it is a tool of patriarchal domination"