Andrea Fernández: “Above all, prostitution is a perfectly integrated and accepted institution in our society”

On Tuesday, in the plenary session of Congress, Andrea Fernández raised her eyebrows, nodded her head and sighed from time to time. She gestured while listening to the interventions of the different parliamentary groups on the bill that his party, the PSOE, was taking to the Chamber: a reform of the Penal Code to “prohibit pimping in all its forms.” The deputy, Secretary of Equality of the Socialists, was aware that the debate, “completely serene”, was not going to be. She had been agitated for three weeks, since her party had to withdraw the amendment on pimping from the so-called law of the only yes is yes so that it would not decline in the final stretch of the process. The reason: the disagreement between the parliamentary groups on prostitution. It is not an error. The dissent is in prostitution, not in pimping, but the edges of this issue are such that, deep down, they suppose an ideological clash that is irreconcilable at the moment; and in practice, she forced the Socialists to withdraw that amendment. A few hours later, they registered that proposal for debate in Congress this past Tuesday. On Wednesday, a day after she got ahead, Fernández (Valencia de Don Juan, León, 1992) talks about the confrontation of positions and the issues that cross them: pimping, prostitution, trafficking and pornography.

Ask. During the Plenary, several groups accused the PSOE of having registered the proposal more by reaction than by conviction. “Tantrum”, Joseba Andoni Agirretxea, from the PNV, called him.

Response. The reality is that the Socialist Party has a very firm commitment to addressing this issue. The current wording of the criminal type of pimping has barely allowed sentences to be handed down for this crime. In Spain, in 2021, one. Given the degree of prostitution that we have in this country, it is clear that something is wrong from a legal point of view.

P. Adriana Lastra, socialist deputy secretary, recalled during the debate that it had been almost a century since the abolition of prostitution had been spoken for the first time in Congress. The PSOE has had solitary legislatures and many opportunities to deal with this issue. Why it is not done?

R. We have introduced other initiatives and actions in Congress to address this reality. In any case, I understand that we are at the right time, we have the support. I think this is the first time it has happened and we have to seize the opportunity and step forward in a brave way.

P. It was also Lastra who warned that this was going to generate a lot of pressure. Among other issues, because it moves an immense amount of money. Could it be pressure that made the PSOE withdraw the locative third party in 1995? Do you think that the Government, Congress and society are prepared to face these pressures?

R. The first case I do not know because the situation chronologically catches me very far. Regarding the second, we will begin to see it now. Of course, I do perceive that there is already some pressure, especially from some media outlets that are trying to ridicule this cause, to make proposals that have little or nothing to do with the substance of the debate. And of course I think it has to do with the fact that this business, indeed, moves many millions of euros.

P. Political unity is going to be needed and at times in the Plenary there did not seem to be much predisposition to it. “Paternalism” and “punitive prohibitionism” were pronounced many times. If no group is really in favor of third parties profiting from the prostitution of women, why did the debate get so sidetracked?

R. Lack of responsibility and lack of rigor when dealing with something that, let’s not forget, has to do with victims, with women. There is a lot of interest in this debate being distorted. Yesterday we heard arguments that had nothing to do with the pimping approach. The intervention of Ciudadanos is an unfortunate example of this. Unfortunate, truly embarrassing. Sometimes it gives the feeling that there are spokespersons who prefer to have a good cut for their social networks.

P. Do you think that this can also generate confusion in citizenship, the fact of mixing prostitution and pimping and abolition and prohibition? People end up not understanding what is being talked about.

A. Yes, you can. And for no reason. Our text not only does not seek to persecute women who benefit from their own prostitution, but also expressly states that in no case will women who are in a situation of prostitution be penalized. Trying to claim that we are going to expose women to greater vulnerability is flatly false. In addition, we have included that women victims of pimping will benefit from the assistance and resource system offered by the Sexual Freedom Law. In any case, what is the alternative? Not address from a criminal point of view a case that is clearly criminal?

P. It is already included in the Penal Code.

A. Of course, the crime of pimping already exists. What we intend is to eliminate the criterion of exploitation, because it is a legally very indeterminate term and it is producing very few sentences. We want to define pimping as the profit from the prostitution of others. We cannot criminally base pimping on the consent of the victims, it is an atrocity.

P. The focus on the pimp?

R. Yes, we must put it in those who put these women in a situation of absolute vulnerability and violence. I think there is very little debate about that. Whoever wants to qualify this as prohibitionist, puritanical, has more interest in the controversy than in working on the text and for women.

P. Have you thought that in a tangential way this could fall as a punishment on them?

R. This issue is among our concerns. The State has the responsibility to protect the victims and for this reason, among other things, we included in the proposal that women victims of pimping be considered victims of crimes, which gives them a specific status of protection. 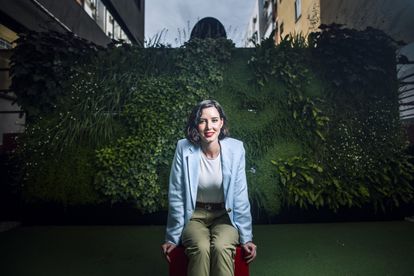 The Secretary for Equality of the PSOE, Andrea Fernández, on June 8, 2022 at the party’s headquarters in Ferraz. Samuel Sanchez

Q. A few days ago, Rocío Mora, the director of Apramp (Association for the Prevention, Reintegration and Care of Prostituted Women), explained that the persecution of locative third parties should not exclude other places. She said that when what is seen is persecuted, like clubs, they find a way to go to another place where they are not seen.

R. The crime of locative third party, as we have stated, will also allow prostitution to be persecuted in the flats, which I suppose is what the director was referring to.

What we want is a dissuasive effect, not so much to criminally prosecute those who resort to prostitution”

P. As for the penalties that you propose, prison is foreseen for johns when women are minors or vulnerable people, but not for those over 18, why is this?

R. To a question of progressiveness and proportionality. What we want is a dissuasive effect, not so much to criminally prosecute those who resort to prostitution.

P. What will happen when they have to specifically address that issue? What approach does the PSOE have for those women, be they three or a thousand, who want to practice prostitution freely and voluntarily?

R. In no case are we ever going to persecute any woman who acts in conditions of freedom. But this debate should not take place in those terms, because we would be talking about absolutely residual and non-representative situations, focusing on the exception. And from the exception rules cannot be made.

P. Although they are the exception, there must be mechanisms to also protect the rights of these women.

R. We consider prostitution as a form of violence against women. We have to focus on the bulk of reality, which is structural and exposes many women to a situation of absolute violence. But I insist and I want to make it very clear: the Socialist Party is never going to attack any woman who, in conditions of freedom, wants to do what she wants and that is what we have included in the bill. We are going to go after pimps and men who resort to prostitution. Prostitution in this country has an end as simple as men deciding to stop paying for sex. And this is another of the important points that are never on the table.

P. Why has it taken so long to put them on the table? It was not until 2015 when, with the gag law, the possibility of sanctioning them was given.

A. Because above all else, prostitution is a social institution and represents a highly ideological reality that is perfectly integrated and accepted in our society. It is women who are always exposed to opinion or judgment, even normative production. We live accepting an idea that is not true.

R. That prostitution is generally exercised in conditions of freedom. It is not true, it is a violent social institution that submits to situations of marginality, of precariousness, of attacks against their physical and moral integrity. That is what we must address from politics.

P. The legislature has little more than a year left, do you think it will be in force before it ends?

R. I think it will be in force before the end of this year. That’s my bet.

Q. And the trafficking law? It has been in the hands of the Ministry of Justice for six months.

R. That text is being worked on, we will surely see it shortly.

R. I am not the one to say how much, but I can say that throughout this year the Government will have made the text public.

P. Also for that norm they are going to need consensus, is it going to be possible?

R. I understand that no and that each political group has its positions, and I think that we must also naturalize the fact that we do not always agree and that we are different political groups. With that little more can be said or done.

Q. Lastly, pornography, what is your position on this?

R. Two very clear axes: education and protection of minors in the use of the Internet and social networks.

P. Are you considering the regulation of pornography?

R. No, at the moment it is not on the table.

P. [Fernández se ríe] What is he laughing at?

R. I know that it was published that the PSOE was going to ban pornography, but no. I laugh because it seems incredible to me to come up with that out of nowhere. It is a controversy inflated by some media, but false. There is no trace of that in the text. What there is now is the process of amendments to this proposal, open to working on any issue that could serve to improve it.