When Blonde’s immersion —actually, descent into hell led by director Andrew Dominik— ends in the life and soul of Norma Jeane Morteson / Marilyn Monroe, there is no doubt: beyond critical discussion, Ana de Armas sweep across the screen. At 34 years old, the actress (born in Havana, and who made her film debut in 2006 with Manuel Gutiérrez Aragón in Una rosa de Francia) has achieved a status in the industry that has completely distanced her from that interpreter of the series Boarding school and that brings her closer to Monroe herself. And at the San Sebastián festival, the 21-minute press conference for Blonde —screened at the Zinemaldia as a surprise film—, and in which Dominik accompanied him, reflected that moment: Ana de Armas is a star, and of those who come to stay for decades.

The journey has been long. At least for Dominik, who at the 2012 Cannes Film Festival, where he presented Killing Them Softly, was already talking about his adaptation of Joyce Carol Oates’s book. For this reason, when the director was asked about its direct streaming premiere —produced by Netflix, it premieres on the platform on Wednesday the 28th in many countries, such as Spain—, he did not hesitate to praise the company: “They are the only ones who They decided to finance it. What I’m gonna say! In the United States it will be in theaters for at least two weeks. And about the relevance of analyzing Blonde within a new wave of cinema closer to the female truth, a wave driven by Me Too, he also felt happy. “The Me Too was helpful in producing this film. Because before many thought that the perspective of a woman on that suffocating Hollywood was not interesting. And the Me Too has turned that absurd reflection on its head.

At the table, however, Ana de Armas received many more questions. She starting with how she approached the Jeane/Monroe dichotomy: “I can’t separate the star from the intimate character. The challenge was precisely to get away from the image we have of Monroe and make Norma Jean visible. It was a very immersive job, with a lot of research and detail. With the aim of capturing all the facets of her: her physicality, her voice, her talent and also to discover the woman to the public. I had to absorb all of this and bring it to the screen.” She told it in a Spanish with very little Cuban accent and a lot of English accent. Result of a vital trip, that of De Armas, which she confessed was unexpected. “I don’t think I said that in Spain they didn’t take me seriously, but that I was in a series for many years. [El internado] in which he was wearing a school uniform. And like in Blonde, an image was created. I would have continued with my career here, with patience, with Spanish directors. There was nothing planned. However, they called me to shoot Hands of Stone [la biografía del boxeador Roberto Durán], I went to Panama in 2015, and the proposals were chained. I would like to work in Spain again”. 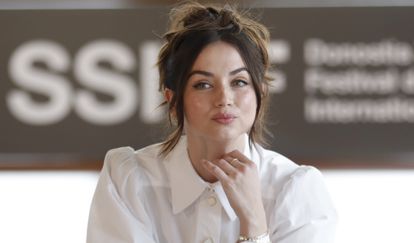 What did Ana de Armas know about her character before coming to the project? “My information was quite basic, and it hadn’t come out any further. Monroe represented a dream, the perfect image, what could go wrong? Now getting a more complete picture of her from her makes me respect her and humanize her more, understand her better, and give her effort more resonance.” He did not want, probably because of that respect, to answer what Norma Jeane would think of Blonde. “I can’t even think about it. It is a seemingly simple question that is easy to misunderstand in the answer.”

For the actress, the film also illustrates the current harassment of performers: “Blonde reflects the times we live in, and what we as actors suffer has gotten worse. We all have a private part and a public part, and it’s difficult to find a balance between what you want to share and what you don’t. In addition, many times it does not depend on you. And he left a beautiful anecdote to remember about the reconstructions of mythical moments in Monroe’s life, specifically when in The Temptation Lives Upstairs, the wind from the subway comes from a grate on the sidewalk and raises her white dress: “The recreations were very difficult. We wanted to do something both exquisite and special. That sequence was very surreal: the guy who was blowing the wind under the grate is the grandson of the one who did it in the Billy Wilder comedy”. This always through the eyes of Norma Jeane, who has found a staunch defender in the Cuban actress: “At that time and throughout the footage, the important thing was both to recreate the scene and the reverse shot, the context of what was happening, what that she lived.”

León Valencia: "In Colombia everyone betrays each other"